"Show me a little respect!" 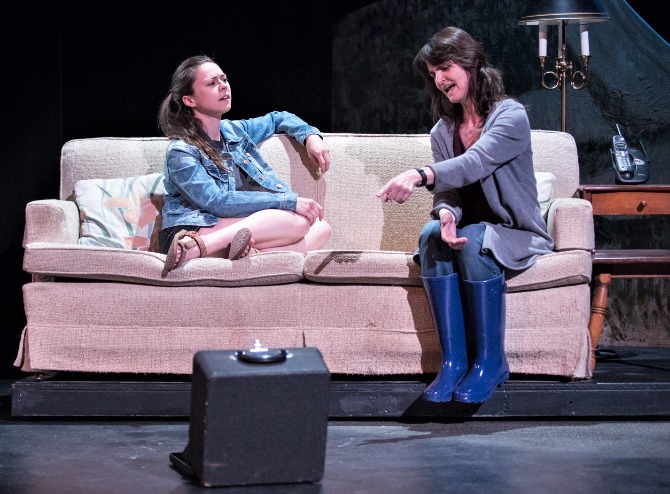 Hyannis, Cape Cod, Massachusetts, 1990: Bobbi Herring, an outrageous and militant taxi driver of 29, who lives with her mother Joanne, begins a quest for personal truths. This is the initial concept for Jim Frangione's new play, "Breakwater," which is having its world premiere on the mainstage at the Daniel Arts Center at Bard College at Simon's Rock in Great Barrington, MA. As the play moves forward the focus of the work moves from Bobbi to Joanne and the two stories collide with that of a third woman, to an iconic, historic figure and simultaneously to a working man who has interacted with most of the others. The work has a scenic quality, not unlike a good movie, and it demands our appreciation of every member of the company of five actors playing seven roles.

David Joseph is the taxi dispatcher, most of whose scenes are played at a desk downstage right. He is the motivator for much of Bobbi's work and he is an easily influenced guy who can fantasize about food as easily as he can see his future with a feisty woman. He is heavily disrespected and he knows it and he accepts it in exchange for the battle of the sexes. Joseph brings a unique sort of grace to this role, endowing it with lusty human qualities that are often as amusing as they are touching.

Joseph doubles as a man trying to date Bobbi who utters phrases that could destroy his chances as easily as encourage them. With two very different accents this actor presents two very different men and brings the working class onto the stage with a relentless honesty. And if you can believe that Cape Cod folk may have been inbreeding a bit over the centuries a lot of what occurs in the minds and voices of these two different men can be easily explained. 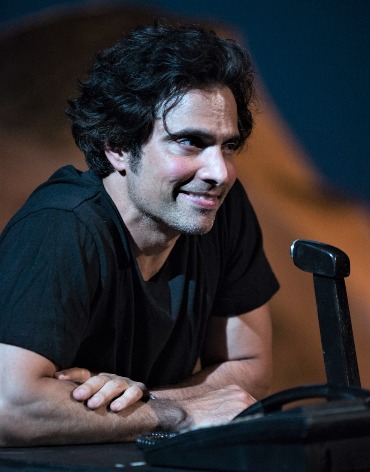 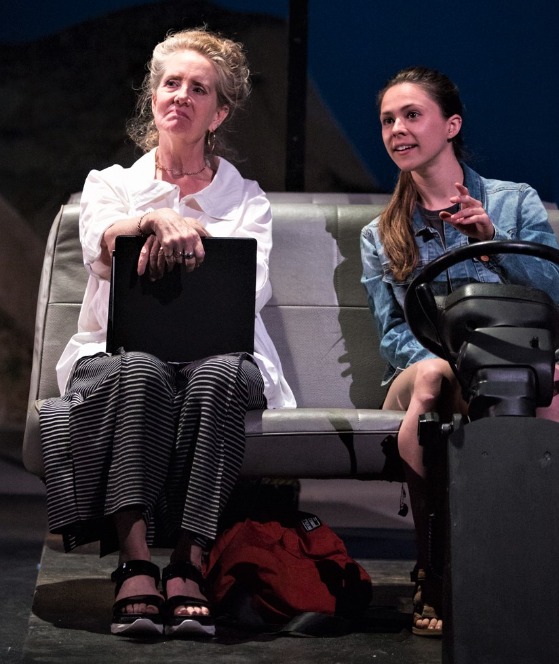 Bobbi's most frequent passenger is the hard-drinking Temperance "Tippy" Dempsey, a widow whose husband, a writer, employed Joanne for several years as his secretary-typist. Played by Leigh Strimbeck, Tippy is a lady whose fine morality has prevented her from addressing the affair Joanne had with her husband for many years. Getting to know Bobbi has been a mission and that newly urgent need has brought about a redemption of sorts.

Strimbeck, who also doubles as the Town Clerk, does a wonderful job with her roles. Her Tippy is a moving, tolerant woman who has lived with secrets, Royal in a box, for as long as possible. Her scene with Joanne is heartfelt and beautifully played. With an almost classic New England restraint she pulls at the heart-strings and exits with her self-preserved humanity intact. 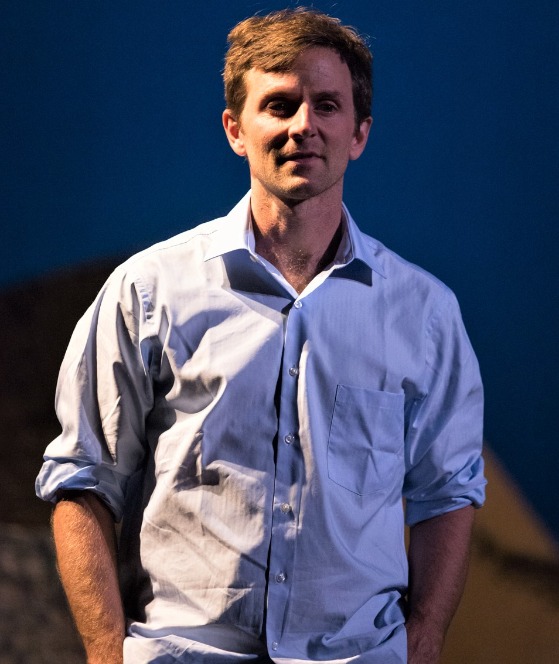 Ryan Winkles as the ghost of JFK; photo: Jim Frangione

In what may be the oddest role in the play, Ryan Winkles plays John Fitzgerald Kennedy, commanding the beach at Hyannis, his soul lost in the confusion of time.  With a familiar Kennedy accent, without the stature, height and weight and without the actual look of Kennedy, he creates a credible and believable JFK. The words he speaks, in the way he speaks them, peppered with familiar quotes from American poets, his honest reveal and his equally honest reluctance to divulge any personal secrets gives credibility to the role created by Frangione and played by Winkles.

Director Kelly Galvin has clearly guided Winkles interpretation of the man, as he might be on this earthly plain so long after his death. Mannerisms, head-cock and intellectual reflections emerging from the actor's mouth give Winkles' version of JFK a wonderful sense of reality.

Holding half the story, Joanne is in control of exactly what information her daughter may have access to. Exhibiting constant strength in the light of events past and present, her emotional breakdown on the sands of the Hyannis beach is the primary moment of honest emotion in the play. As Frangione's play moves forward it is the past that Joanne keeps quiet about that haunts the future for this woman and  her adult daughter. While the play needs a bit of tweaking here and there, Joanne's story is absolute, right on, intact. When she reveals some of her past to her future-minded child, it is clear that a marriage to an abusive husband and her need to protect the truths that may have motivated some of his bad behavior toward Bobbi, is perfectly wrought by the playwright and presented by the actress. They seem to work in a personal unity in this play. 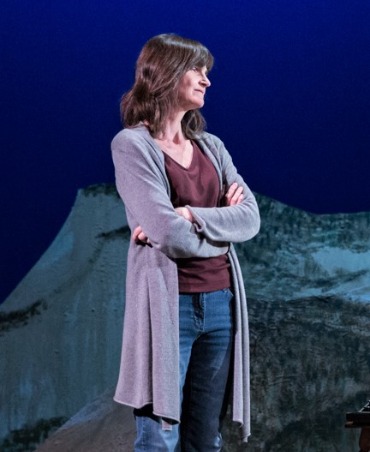 There is but one lead in this play, in spite of the wonderful work from the entire cast, and that is Raya Malcolm. She plays with an intensity and humor that seems both personal and inescapable. Her energy drives everything that happens in the play. Here is a very talented woman playing a driven taxi driver who knows what she needs, wants and requires for a life of her own.

Kelly Galvin has directed this stage-film with its many transitions in the best possible way, keeping it tied to the stage, yet free to set its Cape Cod imagery on a wonderful, atmospheric set by Carl Sprague.  John Musall's lighting really works wonders in the transitions so that the mechanics of stagecraft are able to happen without keeping the audience waiting for the next set of revelations. Brittney Belz's character defining costumes help to keep us mindful of the realities of the lives on stage.

As world premiere's go, this is the first production of the newly formed Barrington Public Theater, also making its debut with a new play written by its founding director. The play is very good, the company's production of it is very good, the acting company is very, very good. Time will tell where the company and the work and workers are going. For now, we have a terrific evening of theater to help start off the 2019 season in The Berkshires. Who could ask for anything more? 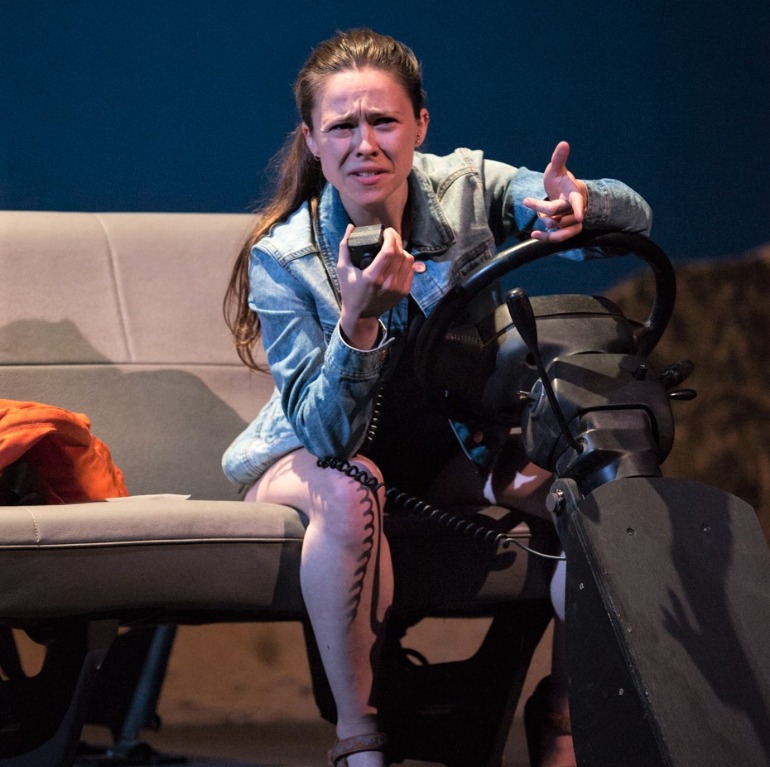 Breakwater plays through June 23 at the Daniel Arts Center at Bard College at Simons Rock, Great Barrington, MA. For information and tickets go to Barringtonpublic@gmail.com or call 413-579-8088.