﻿"The world doesn't survive without the mother."

When Donald Trump gets actively persnickety in his attitude and his verbiage his protein goes wacky and his entire family background is thrown into contention over what is truth and what is not.  In a way, the same question has been brought forward about Neil Simon's play "Brighton Beach Memoirs" directed by Nathan Stith, currently on stage at Oldcastle theatre in Bennington Vermont. Surprisingly the question of protagonist has been shoved forward at the audience we are forced to ponder just what Simon was after when he wrote this play. 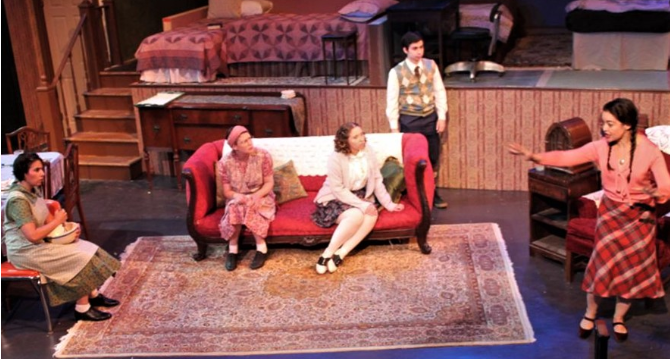 Early on in the play we are confronted with the style of the show. Early teenager Eugene Morris Jerome is telling us the story of his life in 1937 in a reasonably decent apartment in Brighton Beach, NY living with his parents, his brother, his widowed aunt and her two daughters. The play is his; he has made it so by being the voice, the point of view and personalized object of interest. It takes an act and a half to realize that the story he's telling is less his own and more his mother's story. That revelation came to me with this production, the fifth time I've seen the play. 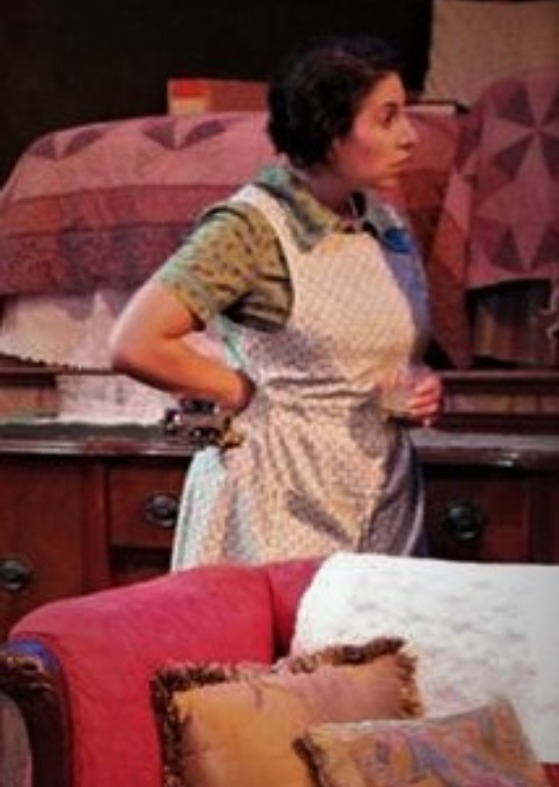 Sarah Corey is an excellent Kate. She plays the role of controlling scapegoat superbly. With a loud voice and a harsh deportment she  overlords all the occupants of her home, including her widowed sister, her devoted husband and her two sons, one a young adult and the other still a teenager who is finding puberty - a word he doesn't know -an occupying alien force. Corey's version of Kate is clearly a woman for whom control of situations is her best mechanism for self-approbation. Her Kate is a needy person who disguises that neediness behind a veneer of demands. She demands respect though her own self respect is in jeopardy. She demands obedience although she herself cannot stay true to her direct orders. This is a woman in conflict with herself over every aspect of her life. This is how Eugene in his narrative depicts his mother and from that point of view she is a hard woman to love, though love her he must.  Of course this is his memoir so it must reflect his perception as a fourteen year old. Corey makes it clear that she is his mother, the woman who has caused him to write this piece in this way. She is exceptionally moving near the end of the play when everything comes out, comes to a head and comes home to bite her. The final scenes are where Corey is allowed to shine.

Eugene is played by D. J. Gleason who has already played the role in both of the subsequent chapters of the Jerome family saga, "Biloxi Blues" and "Broadway Bound." He lives in two worlds on the Oldcastle Stage: the real world of the apartment and the half-spot world of his memoir, a light that follows only him when he falls into the narration form that Simon has given him to use for commentary on the action and the people. It's a tricky thing to do, to be a part of the action and the narrator. Gleason uses two styles of speaking to make it work and it is very effective.

This is as good a point as any in which to congratulate the entire company and their unsung (Unnoted in the program) dialect coach for they are all quite consistent in the sound of vocal pronounciation. They are clearly a company who come from and live in the same place. From father Jack to cousin Laurie they are an unmistakable neighborhood entourage. Gleason and Corey are the best at this, each of them sounding like vocal clones, exactly the way a mother and son would be. Like little else in this play about individuals the symmetry of sound underscores the difficulty in their relationship.j

Eugene's brother Stanley is played with verve, and a 20th century modernism by Anthony J. Ingargiola. As Aunt Blanche, Sophia Gorder is splendid, a frightened mouse of a woman who finds her youthful zest again. Eli Ganias is an emotional stoic as Jack Jerome, head of the clan. Kristen Herink is a softer cousin Laurie than I've seen before and it works for the play. As her sister, Nora, Kate Kenney is just perfection, even to the break in her voice when Nora's emotions overwhelm her and everyone else listening to her.

Nathan Stith has worked wonderfully with this fine cast putting the play on its actual path. The design team has created an odd reality in a set that needs to expose more than one floor in a suburban home: Richard Howe's fine set, Ursula McCarty's perfectly defining costumes, David V. Groupé's lighting and Cory Wheat's sound designs combine in a perfect symmetry of Brooklyn, 1937. And the play finally lives where it should, with the mother! 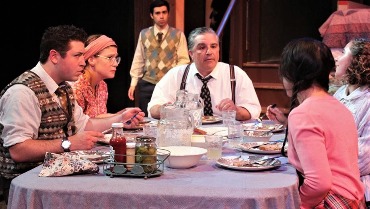 Brighton Beach Memoirs plays a Oldcastle Theatre, 331 Main Street, Bennington, VT through July 28. For information and tickets go to oldcastletheatre.org or call the box office at 802-447-0564.