Gertrude and Claudius, by Mark St, Germain, based on the novel by John Updike. Directed by Julianne Boyd.  Reviewed by J. Peter Bergman.

"I have been told that a wife completes a m﻿﻿﻿﻿an. This Amleth seems complete already."

This is just an example of what's  wrong in the marriage of a Princess who will become a Queen and a prince who is destined to be a King. Their political lives can't take them anywhere and their attraction is mostly one-sided, though she grows to love the man and to cherish him. He, however, is a jealous man and he suspects his adventurous, ardent and amiable younger brother of more than mere filial devotion to his bride. Though the brother does protest too much, it is pretty clear that he finds the new wife to be very attractive, and so she is. And so it goes. . .for over thirty years when the wrong romance begins to heat up and grow out-of-control. This play is episodic and has a romantic second act while the first act is fascinating for its history of the kingdom, the conquests and the love-affair though it really doesn't exist yet. It's rather like a pot on a back-burner, heating up slowly. 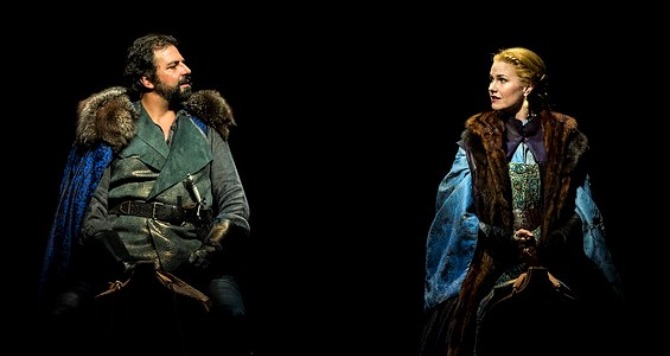 Elijah Alexander as Claudius and Kate MacCluggage as Gertrude;

Prince and Queen keep their distance even though he wants to grab her, jump her, possess her "right now."  She, on the other hand considers him a pastime, an amusing dalliance and nothing more. But it is amazing how a simple flirtation can lead to passionate longing and how that can lead to outrageous teasing on the narrow path on which there is no space for turning back. Claudius and Gertrude set themselves traps they lay for each other and inevitably they fall into those ironclad grips that hold them fast . . . and loose.

Elijah Alexander is the dynamic Claudius who finally, finally, finally convinces himself to act on his fantasies and murder his brother so he can move in on the widowed Queen.  Kate MacCluggage is the beautiful and distant Queen whose loins tremble when she reads a letter from her brother-in-law and who can't keep her dirndl dry when he comes near her.

The truth is that author Mark St. Germain has done a very neat job of transforming the John Updike novel into a play. The chronology of thirty years is covered in two hours and the major moments are all intact. The language is related to that of Shakespeare's time but isn't truly there so no one should have any trouble following the story. The other truth is that for all the hot and heavy psssion in their story Gertrude and Claudius are far more intellectual about it all than they are emotional. Oh, they share a devil of a kiss or two, but even their getting to it and getting out of it is far more brain-oriented than it is heart or loins. All the way through the play I wondered when I'd hear, see, smell or feel absolute need and erotic involvement and even at its hottest it never approaches what it needs the most, that all-inspiring passion that lets him commit the fratricide and also lets her allow it without censure. That kind of passion is missing.

Mary Stout as Herda and Kate MacCluggage as Gertrude;

Kate MacCluggage is a beautiful Gertrude, a woman who can flirt and carry on a serious conversation at the same time. She has a beautiful voice, a stunning body and a divine face and in her regal costumes she is a picture-perfect woman. We can see and hear her when she speaks love and we can tell she means every word, but the content of the play keeps us from feeling it.

Her two swain, brothers, are very different from one another. King Amleth, her husband, is a regal man whose voice is always an unanticipated tenor which works against his physical image of a bass-baritone. Douglas Rees is convincing as the King, but though he speaks his mind out loud, his thoughts behind the eyes are as visible as the fur that tops his cloak. He is always playing against the truth Amleth lives by.

Alexander's Claudius, on the other hand, is a steady and sturdy fellow whose constant plotting and planning is ever visible but whose honest love for this woman is never shown in his face or body. When he finally gets ready to take her as his mistress, there is a momentary twinge of that passion I kept anticipating and then a mechanical picture of lust as it should be played preceded the slow blackout on the scene.

The most honest and realistic portrayal of love and concern came from the comic relief character Herda, the servant played by Mary Stout who made me laugh with her reactions and made me cry with the same. She brings honesty to her care of her princess and it shows and it works. She is a brilliant addition to this company, just what the play needed to keep it human and not symbolic. 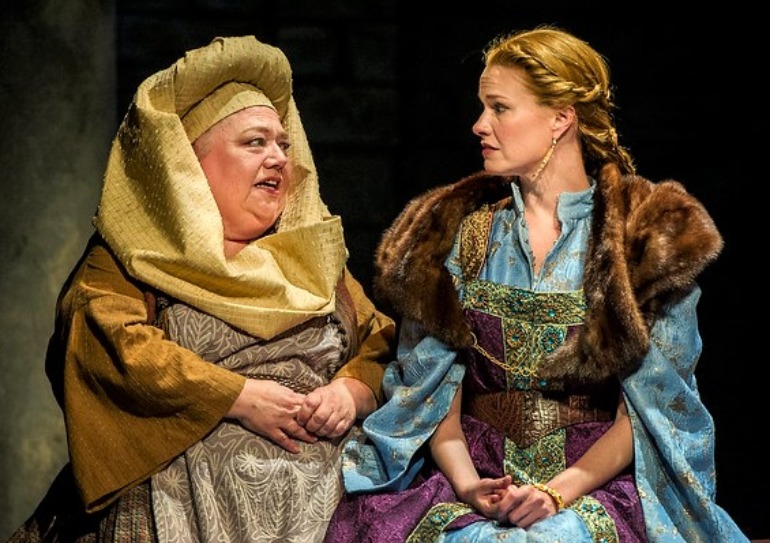 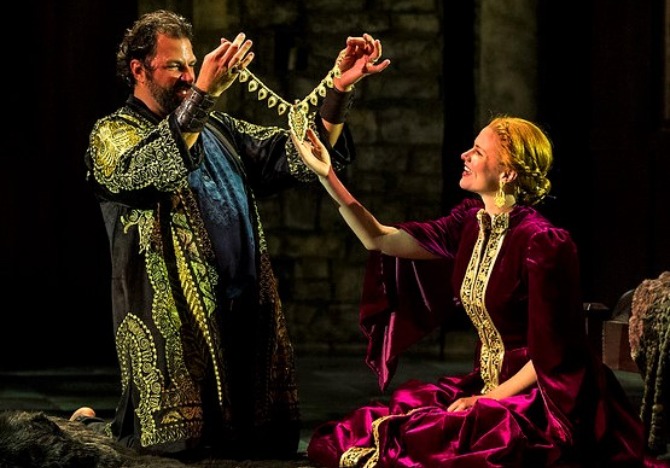 Two more actors contribute wonderfully to the performance. First there is Greg Thornton as King Rorik, Gertrude's father whose illness prompts him to wed his daughter quickly to an upright Royal. All of his scenes had warmth and sincerity and I hoped this was a sign that the writing would continue to show real feelings. Rorik's embraces were all emotionally right and very touching. I missed him when he died.

His chief servant, Polonius, was wonderfully and honestly played by Rocco Sisto. His work in this role could not be better than it was, whether he was included in the plotting, or talking about his young daughter Ophelia he was always true to the character and living inside his character. He made the foolish man into an endearing man.

A third actor played Yorick, the jester as well as young Hamlet, the prince/son of Gertrude and Amleth. Lucky for  him they transposed the final letter of his father's name to be the first letter of his, rather than the other way around. Nick LaMedicka made the two roles different and his own and he was fine, particularly in the final scene of the play, the pickup of Shakespeare's early scenes.

This is a stunning production directed by Julianne Boyd who has taken her cues from the script to present us with perfect pictures of these people and their relationships. Sara Jean Tosetti's costumes are lush and warm and wonderful in their splendor. The sets by Lee Savage beautifully portray the places in the late Medieval period. David Lander's lighting shows us what we need to see and keeps us in the perspective of place at all times. Jenny Giering's original score brings in a period sensibility that helps enormously and Lindsay Jones' sound design is absolutely superb, the best of the season.  Boyd's work cannot be underestimated here as she worked with a script that never quite conveyed the majesty of love's intent that she physically brought into it. It's not the language that makes this play what it is and what it isn't. There is emotion missing in the cleverness of the dialogue and the letters exchanged. Each element from casting to design to direction is individually great, but the play doesn't support all that good work.

Gertrude and Claudius plays on the Boyd-Quinson Mainstage at 30 Union Street in Pittsfield, MA through August 3. For information and tickets go to barringtonstageco.org or call the box office at 4143-236-8888.