Jane Eyre, based on the novel by Charlotte Bronte.

Adapted and Directed by Elizabeth Williamson.

"I am a human being with an independent will."

Until last night I believed that there wasn't a single soul who hadn't read, or been exposed through film (there are six versions starting in 1943 and continuing through 2011), to Charlotte Bronte's novel, "Jane Eyre." To my amazement that proves to be untrue. For them, this new play seen in its world premiere production at Hartford Stage Company, will be the benchmark. Luckily, the play is very true to its source published in 1847. I was amazed at the reactions to Jane's treatment by her Aunt Reed, her semi-sadistic employer Mr. Rochester, by her own cousin, a minister, and by her own indomitable and independent nature. In spite of glossing over her school years and the death of her first real friend, Helen (a beautiful Elizabeth Taylor in the 1943 edition), which shapes her relationship with Mr. Rochester's ward, Adele, later on, this is a fine play. Jane is feisty and although she sometimes makes the wrong choices, they are hers to make and she lives with them. I found her spirit, when I read the book in the fifth grade, to be inspiring. In this play I was glad to see that this element of her character had not changed. She makes those difficult moments work for her and Helen Sadler, playing Jane, has moment after moment of struggles with reality through which to emerge a stronger, more moral, individual. 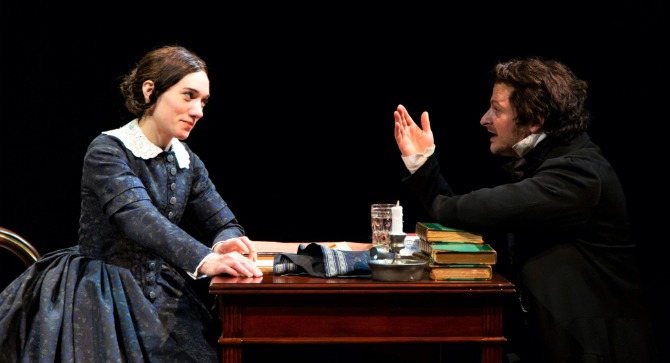 Jane, plain Jane, is an orphan with seemingly no relatives other than the Reeds. The kind and generous Mr. Reed has died leaving his orphaned neice to the mercy of his vicious and jealous wife. She and her hateful son are the only people Jane has to rely on and other than a servant, Bessie, she is clearly out-numbered. As young Jane in this play Meghan Pratt plays every right note in her role. When she takes on her Aunt it is with a child's own viciousness and this establishes Jane's role in the world perfectly. Pratt is a talented child and I was glad to see that she wouldn't let audiences down.

When the grownup version of the child appears she has that same sensibility. She doesn't take well to mean-spirited criticism. Sadler, in fact, is the pluckiest of young women as Miss Eyre. She faces the world with a practical eye and an attitude of success - there is no sense of subserviance in her portrayal. Sadler's greatest asset in this role is the take-charge manner she displays. Using passages from the novel as narrative of her own life Jane tells the story as she plays it out before us. She takes the adaptor's work and makes it seem like her own, knowledgably, assertively, with no sense of scripted words at all. Doing so, she is rarely off-stage. Sadler's work is excellent, theatrical and honest at the same time. She literally inhabits the role of Jane Eyre. 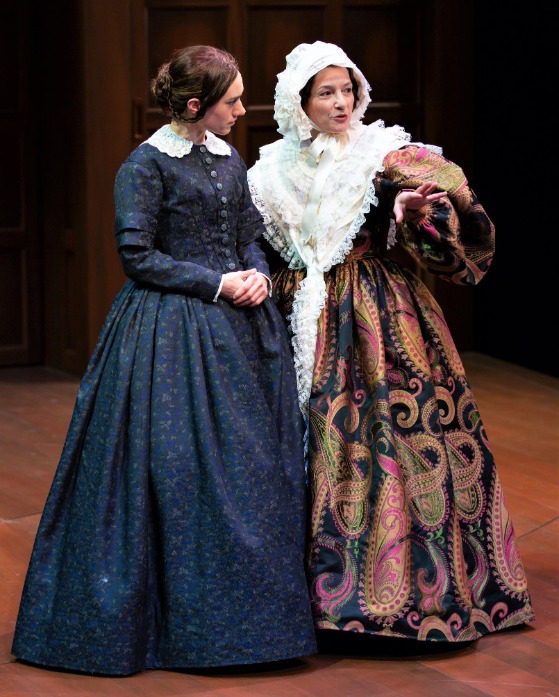 The small supporting cast do remarkable work playing multiple characters, often as different as you can imagine. Felicity Jones Latta, for example, plays four different roles, as different as can be. She plays Jane's Aunt Reed, the meannest woman imaginable. In this role she is imperious, in love with herself, and unnecessarily cruel to Jane. She is Mrs. Fairfax, the housekeeper at Mr. Rochester's home, who embraces Jane with a maternal flair. She is the haughty Lady Ingram marketing her own daughter as the "bride of the year." And she is also Bertha Mason, a mad woman bent on the destruction of both Jane and Rochester. Her performances (and she switches back and forth from one to the other) are perfection.

Equally at home with role switching is Megan Gwyn who plays Mary Ingram, sister of the intended bride of Rochester, a verbally biting young society woman, then the maid-servant Leah, and Diana Rivers, the sympathetic sister of a minister who helps Jane with her recovery from pneumonia and exhaustion. As Mary's older sister, Blanche, an over-confident and marginally cruel, judgemental woman who wants to marry Rochester, and as Bessie, the sympathetic housekeeper, and as the madwoman's watchwoman, Grace Poole the company employs Marie-France Arcilla who keeps each identity crisp and crystal clear, acting them as they should be seen and understood. Truly a remarkable collection of characters as Ms. Arcilla presents them. 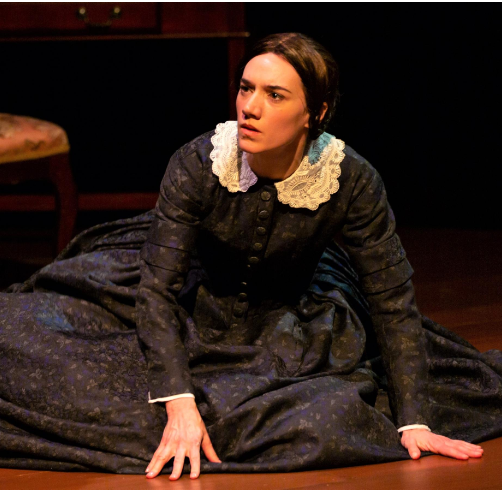 There are also two men who fall into the multiple roles category. Grayson DeJesus plays Jane's cousin John Reed, whose cruelty to his younger cousin is truly insupportable. This is a brief role, but it clearly establishes the trials of the child Jane. He also gets to portray Bertha Mason's brother from Jamaica, a man whose concern for his sister's rights, and in possibly preventing a loss of his own rights, brings humilation and worse into Jane's life. DeJesus also plays the Reverend St. John Rivers, a kind man whose self-serving need could possibly be a mending road for Jane at one point. In this role, in particular, the actor has wonderful opportunities and he makes the most of them in many ways.

Steve Routman plays four parts and though each is brief he has the remarkable facility of making them not just different, but visually making them different heights. Near the end of the play when he appears as John, former manservant to Mr. Rochester, I would have sworn he was at least five inches shorter than he had been as the Priest at the wedding. I think that is wonderful acting.

Meghan Pratt reappears as the other child, Adele Varens, whom Jane is hired to educate in her job as governess. This is a much longer part than Child Jane and Pratt, once again, gives it her all. As a French orphan she has all the verve and excitement of a child. She also has a French accent which was very difficult to cut through and understand, but her physical playing of the role more than accommodated. At the end of the play, after more disasters have occurred to these people, we are left without any understanding of Adele's fate, which has always been a sore spot for me. I tell you this so that you won't be confused about it; this is the way it has always been. 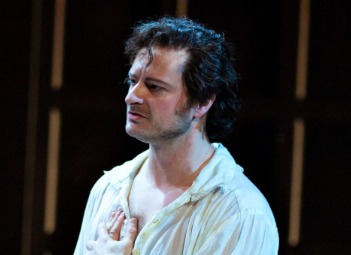 The big, dark soul of the play has always been Mr. Rochester. In this version he is played by Chandler Williams who seems, from the outset to possess just such a soul. With an imperious manner and a rasp in his voice, abrupt movements and a seemingly open disregard for Jane's positions on things, he is the anti-romantic figure. Watching Sadler's Jane fall in love with him is part of the dynamic of this play. He is a victim to be saved. We can see that in her way of addressing him. He is a challenge to be taken. To my delight the dinner party Gypsy scene, often left out of versions of "Jane Eyre," is played out with gusto and Williams is wonderful alongside Sadler in this key moment in their relationship. His final moments in the play are nearly heart-breaking. I ultimately enjoyed him very much.. 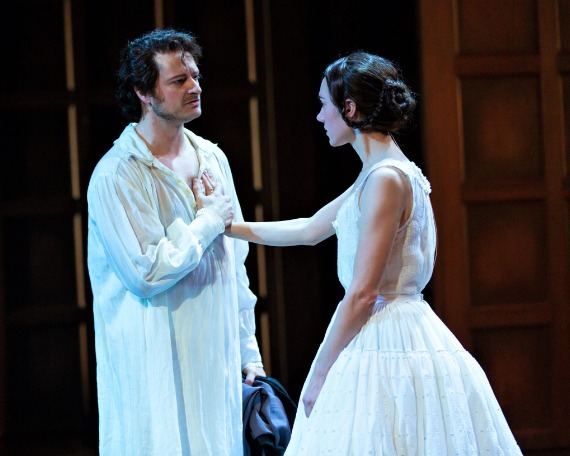 This is just a prime example of how one form of narrative can be transformed into another. Elizabeth Williamson has done a fine job of creating a play from a novel and she has directed it without trickery or recourse to filmic techniques. The play moves beautifully and simply from one arena to another, thanks to the excellent set design work by Nick Vaughan. Ilona Somogoyi has created picture perfect costumes of the 1830s and the most sensitive lighting design created by Isabella Byrd blends all of the other elements into a lovely and emotional picture of the period of the play.  There is orignal music by Christian Frederickson used perfectly by sound designer Matt Hubbs whose theatrical sound effects were just right for the play as were the wigs and hair design added by Jason Allen. Congratulation so the stage managers, Hannah Woodward and Kelly Hardy for running a most complex show.

If you know the book you'll enjoy the play. If you know the movies there may be some revelations. If, like the women behind me in the theater, you are unfamiliar with "Jane Eyre" you will be joyously and amazingly converted to the world of Charlotte Bronte. This is an excellent experience, highly reccomended and deeply encouraged. See it. 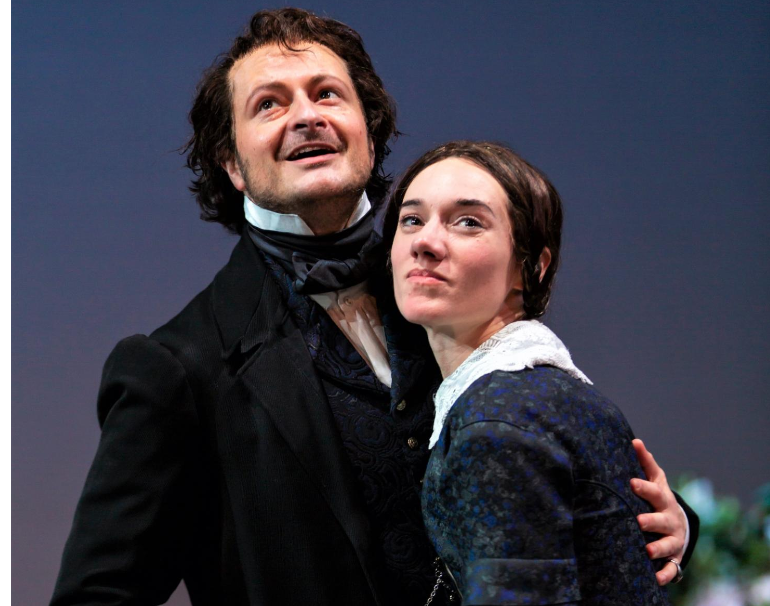 Jane Eyre plays at Hartford Stage, 50 Church Street, Hartford CT, through March 14. For tickets and information go their website,  www.hartfordstage.com or call the boxoffice at 860-527-5151.