Betty and The Peach, written and directed by Danny Eaton.

The Patch is a small and rustic upstate New York building, once an active farmhouse, and more recently a restaurant for privte dining and events run by Betty Borelli, a single woman with a grown daughter, a lawyer living in New York City. Betty loves the Patch; it is where she grew up, where she raised her child and a young black man named Bobo, Bobby Henderson, whose mother deserted him when he was eight whom Betty raised. He is the restaurant's "executive" cook. He is also in love with Cristina, Betty's daughter. She loves him as a brother and is involved with Michael Harrington, a prig and a snob. Tina has never been told who her father is and, on discovering that Betty may be dying from her recently returned cancer, is dying to find out the truths of her existence - past and present. These are the principal tenets of Danny Eaton's play, "Betty & The Peach" enjoying its world premiere production at Eaton's own theater, the Majestic in West Springfield, Massachusetts. Eaton is author, director, producer. He has given his audience a very fine introduction to the work. i

﻿Katiei Mack plays Cristina. She is lively, loud allmost to the explosive level, charming when the script allow her to be and clearly very talented. In the first act of the play she and the other actors expose facts rather than have meaningful dialogue (the play's greatest weakness). In Act Two, however, when the characters get to speak with one another rather than to each other Mack's Tina gets to be honestly emotional about things and the play gets its drive going as a new character creates new problems. The restaurant has suffered a temporary closure due to a fire, Tina's mother has decided against treatment for her cancer, Tina's fiiance has walked out on her and Bobo doesn't know what to do with his own problems, mostly concerning Tina. In this second act, in addition to real dialogue bringing folks into focus, things happen in frontn of us and the play takes on a life force that makes it interesting. 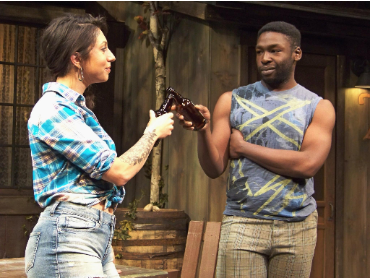 Katie Mack and Issa Best (both from New York City);

Tina's "brother" Bobo is played by Issa Best almost constantly on the move in his scenes, as he creates a young man of high energy and conflicting personal issues who is a perfect complement to Tina and her mother, Betty. This alternate and positive dynamic is a parallel to Tina's persistent negativity. Best makes it all seem natural and right, his character's honest concern about the two women just what is needed in the play. John Thomas Waite plays Andy whose charming pleasantries bring hope to the proceedings. Brad Shepard's Joey, "Uncle Sleepy" adds a bizarre humor to this rustic community. He is the one character I could easily dispense with but there he is and there he stays.

Betty herself is played with a marvelous off-hand style by Christine Anthony who dominates Act One and is off-stage too often in Act Two. This actress seems to have a native instinct for this character; she gives Betty instant reality and a decisiveness that separates her from everyone else in the play. Whether showing controlled anger, abiding love, adoration for the outsider or casual interest in an interloper Anthony creat4s and maintains with honesty all of Betty's quirks and jerks. Even her physical actions reflect the author's dramatic senses. She is clearly the right actress in the right part. 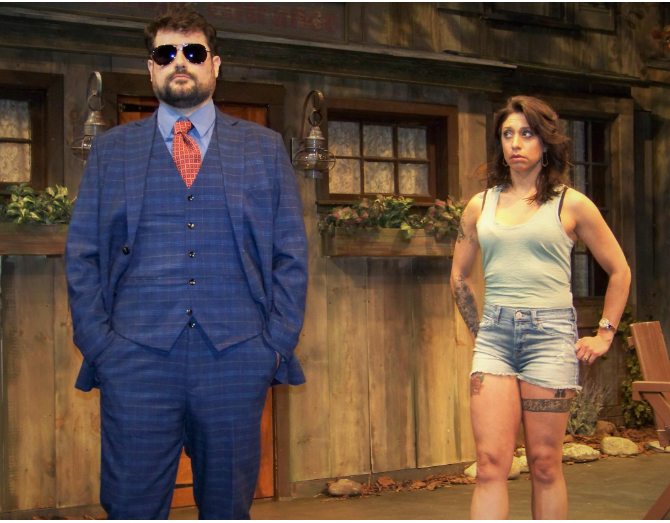 Playing the outsider is a challenge for any actor and Michael is definitely the outsider. Michael Graham Morales does very, very well as the man nobody needs, including his fiancé, Tina. In his surprising second scene he turns into a reprehensible boor which is not easy to play, and which Waite does extremely well.

If there is a real "star" in this production, it is the design team for the show. As a team they have created a physical world that is amazing. Set Designer Greg Trocheil has built The Patch with its window, doors and fences to perfection. Daniel D. Rist has lit the locale and the people beautifully and Costume Designer Dawn McKay has chosen clothing well. Danny Eaton, as director, has honored the work of Danny Eaton, author with a finely presented staging of the play, but the play itself is still somewhat uneven. The first half is too predictable and the second half, though better, settles for a pat and anticipated set of conclusions. I think a new play is always worth seeing and this one has a lot to offer.i It also has a way to go to make it to perfection.

Betty & The Patch plays at the Majestic Theater, 131 Elm Street, West Springfield, MA through July 24. Tickets can be purchased in person at the box office or over the phone by calling (413) 747-7797.