"Life without faith is an arid business."

Charles Condomine, a successful novelist (played by Russell Garrett) has invited to his home in Kent, England, a renowned mystic, Madame Arcati (played by Jeannine Haas) for an evening of professional demonstration of her art.  He is writing a book and needs an experience on which to base his main character. She is handy, living only seven miles away. With them is his wife, Ruth (played by Fleece) and another couple, the Bradmans (Stuart W. Gamble and Christine Voytko). The evening is not what anyone expects and after Madame Arcati leaves, Charles begins to comprehend the accidental, or incidental, results of her work. What follows is the adventure of a lifetime when his first wife's ghost takes up residence in his house. After that nothing is ever the same again for Charles and Ruth and nothing is ever the same for their maid, Edith (played by Caelie Scott), either. "Life without faith," Charles remarks, "is an arid business" and for the Comdomines life with faith is inconsistent with their limited realities. This play shows us what two people can do when they accept their uncertain futures honestly and try to live with the cards they've been dealt by the hand of fate. This may not sound like fun, but, honestly, it is. Coward's play, when the laughs aren't forced as they so often have been, faces dilemma, pride and decision-making with mutual honesty and everyone suffers for it. And you laugh. You just laugh! 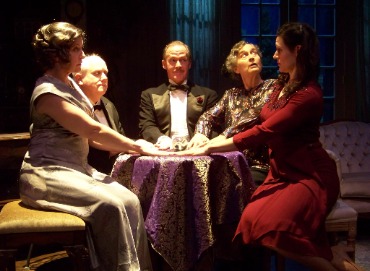 Caelie Scott as the Maid, Edith, gives this character real character from her first awkward entrance into the beautifully designed drawing room created by Greg Trochlil. Scott is a real presence as Edith and the laughs she garners throughout the play are genuine and well-realized. Her final exit, often played by others for the worst sexual inference possible, keeps in character and gets the gentle reaction that gentle humor engenders.

As her mistress, Ruth Condomine, Fleece has her sweetest moments in the play with Edith. Dealing with an inherited servant is never easy and Ruth works at the relationship harder than she does with her husband. Fleece displays Ruth's best side in her scenes with the frustrating servant, her 'maid-of-all-work'. What she faces with Charles takes the actress to the edge of sanity and composure which she plays with dramatic force and emotional disparity. It's a wonderful performance. 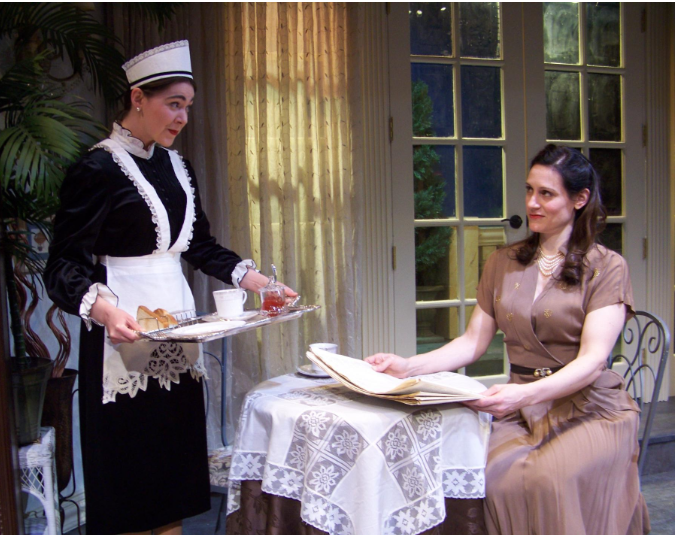 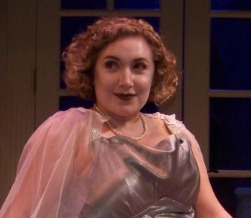 Elvira, the dead first wife, gives Sarah Corbym Woolf multiple opportunties to stretch the comedy info farce (Coward's own description of the play) but she plays the humanity in Elvira's inhumanity instead, creating a much stronger character than is common. Her Elvira is limited only by death; she exhibits every womanly sense as she overstays her awkward welcome. Woolf keeps Elvira real and gives Coward's character a palpable insanity.

The beleaguered husband of two wives, Russell Garrett, as Charles, almost ages before our eyes. His Charles is relatively unsympathetic which increases our interest in Charles and how he manages to deal with his uniquely unsatisfying menage-a-trois. He makes the dramatic most ouf of his comedic situation. 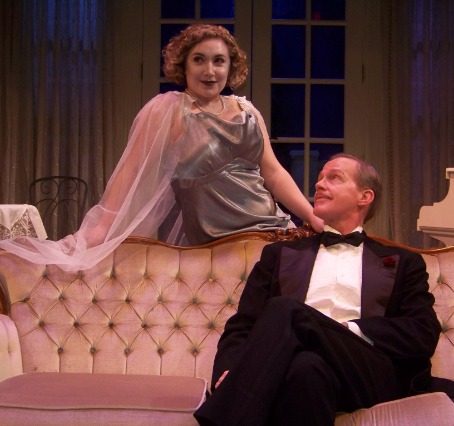 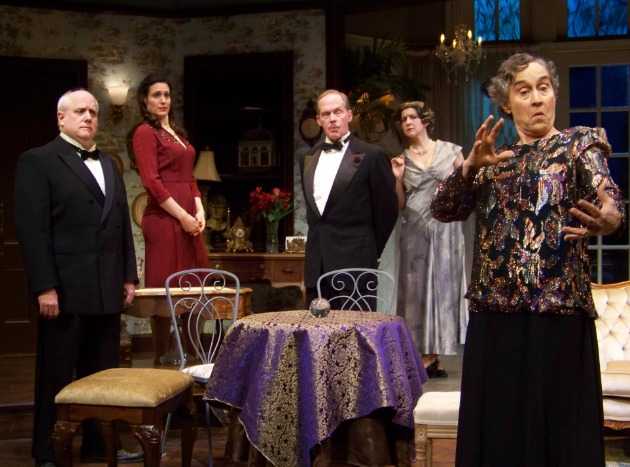 Madame Arcati can, and has, stolen this show many times. Jeannine Haas has chosen a better way to play than the usual farceuse. She plays the woman more in the style of Oscar Wilde than as the fifth Marx Brother. Arcati is an early Vegan, but Haas allows her the human options of a special guest. The woman's work is presented with a basic understanding of reality in the mystical and her laughs are garnered through character traits rather than through caricature. She plays every funny bit from the truth Arcati brings with her on her bicycle. This is a very real woman who cannot be anything but honest and bears the brunt of others' scorn with high-level heart and a secure sense of self-importance. When the script puts her into ridiculous reactions, Haas simply acts through it and reemerges as a real person instead of as a joke. I love Margaret Rutherford in the role and Haas comes close to that absurdist/actress, only without stepping over the line of honesty.

Director Sue Dziura has done a remarkable job with this play removing it from its usual forced humor and letting it play as real as an O'Neil drama. Her production is enhanced by Dawn McKay's lovely costumes and the somewhat awkward lighting by Daniel David Rist. No ghost play is without its special effects and those in this play, in the beautiful Majestic Theater have been created. it seems, by Greg Trochlil. This is a wonderful production and I'm glad I saw it. You will be too, so get your tickets now.

Blithe Spirit runs February 24 through April 3 at West Springfield’s Majestic Theater, 151 Elm Street.  Tickets for the show are available at the Majestic’s box office or by calling (413) 747-7797.