Though not a pretty sentiment or statement this sums up the philosophy of the only white character in Celeste Bedford Walker's play, "Camp Logan" produced by the Black Theatre Troupe of Upstate New York on the mainstage at Capital Repertory Theatre in Albany, New York. A World War One comedy about soldiers in 1917 training for combat and looking forward to being sent to France to fight for democracy and high ideals, this is more an illustrated history lecture than it is a play. The men are in an army camp in Texas (it is interesting to compare this early 20th century Texas to today's version), each with his own agenda for the future but all experiencing pride at their future intentions. When their goals are suddenly shattered by the White Establishment their reactions set up the final dramatic situation that brings them low and sets up the final "lecture" by one of them two years later. Truth, being somewhat stranger than fiction, prevails and history is just about as ugly as anyone might assume.  But these men are interesting and worth getting to know as played by this company's excellent actors.

﻿James Alexander as Captain Zuelke has the hardest job playing a man who wants to be liked while carrying out the orders that make him the most hated man at Camp Logan. It is his statement, above, that sums up the honest philosophy that controls his attitude towards the good men under his command. Alexander does well in the role and his subjugation of Emmett Ferri's Sergeant McKinney, a 22-year veteran of that army, is both brutal and beautifully acted.

Marquis Heath plays Charles Hardin who lives to tell the story of the men with whom he trained. A man of ideals, the young soldier has abandoned college to serve his country and spread the concepts of our nation abroad. Heath gives idealism a good name in this role and Hardin's compatriots, older and more cynical, are the perfect setup for this actor's loving interpretation of this character. A good actor in a good role is always a good thing and this production profits from his work. 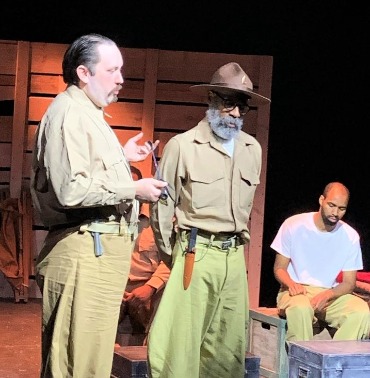 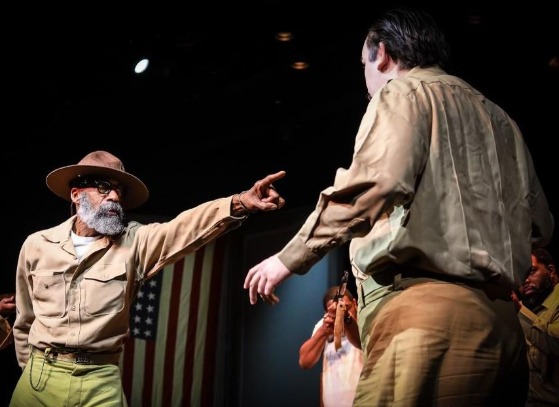 The wide stage at theRep lends itself nicely to this production created by Obadiah Savage. Simple and spare it smacks of the breadth of a Texas location without specificity. Well-lit by designer Nicolas Nealon and costumed by Barbara New Berti the play's historical truths are made doubly universal   through its lack of period identifiers. The play's identification of both jealousy and prejudice are still the issues being dealt with more than a century after the incidents portrayed and director Aaron Moore has managed to show us that our world has not progressed far in the intervening years. This gives the play a relevance that should turn an audience on its heels. 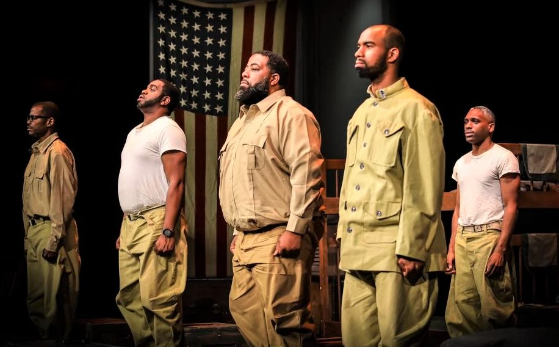 The balance of the ensemble all turn in excellent realizations of their characters. The company is so good it is hard to single out one or two of them (and without a printed program to consult it is even harder). However, Leo D'Juan is a standout as "Bugaloo" turning his catty cynicism to outrage. Aileem Penn brings life to Franciscus whose early "demise" casts an emotional pause to the men of this corps.

It is great to have so professional a company as this take on a play of substance at this time in our country's checkered history. People should see this.