Cats, based on a book by T.S. Eliot. Music by Andrew Lloyd Webber.

There is no surprise in that statement. In the musical "Cats!" it is made particularly clear that this is so. None of the cats in this show is particularly loveable. I must admit that I am allergic to cats, in life as well as in this classic, Tony Award winning musical show. I've seen it a lot since it first opened and while there are things I admire about it the show has never been one of my favorites and that will have an effect on what I write here about this latest touring production. It is a beautiful production, glorious to see and glorious to hear. I have no complaints about those elements. What I don't like is the show itself. It is pat. It is relentless. It has no heart even though the barely existent plot would have us believe that "heart" and sympathy is what its all about. 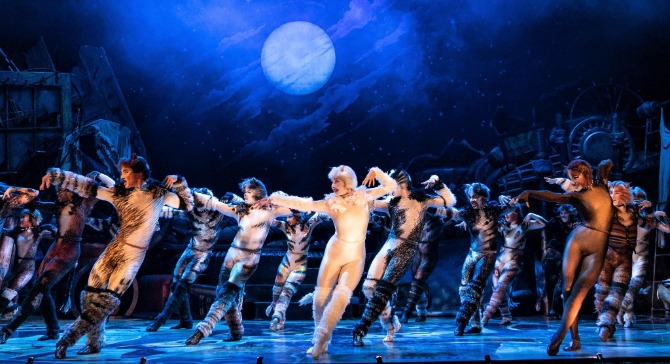 Directed by Trevor Nunn and choreographed by Andy Blankenbuehler (based on the original choreography by Gillian Lynne) the show moves and moves and moves. The lighting by Natasha Katz leaves us wondering which cat is which, and there are plenty of them, even when one is identified by name. As each number progresses the principals fade into the crowd and have to be searched for, though they do reappear but not where you expect them to be. 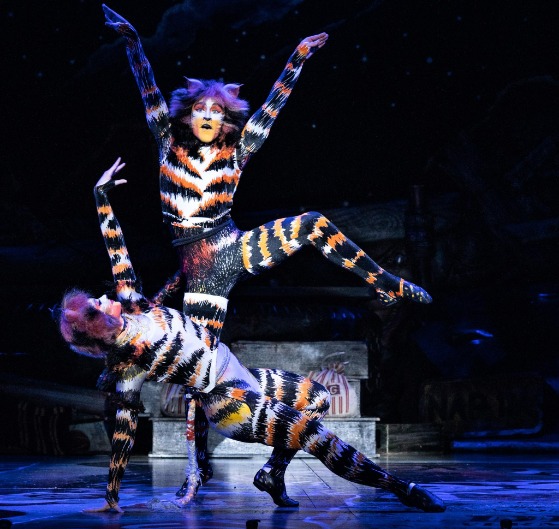 It's hard to tell if the show has been cast with dancers who sing or singers who dance. Dance and movement are so essential to the success of this piece. However, the singing is superb except for one voice that was almost unbearable, a high-pitched squeak of a voice. John Napier's original scenic design and costume design has been well adapted for this production even if some key elements in my memory are missing, in particular a giant trash can which securely set the show in a city back alley, the perfect locale for this show about a special group of cats who gather annually to celebrate the special status as Jellical cats who gather to send off one of their own to be reborn into a new life (the plot of the show). Along the way we meet and watch celebrated Mungojerrie and Munkustrap (Max Craven and Nick Davis), Asparagus, better known as Gus, the Theater Cat (John Aker Bow), Macavity (Aiden Pressel) and Jennyanydots (Michelle E. Carter), all of whom gave their all and delighted the large audience  assembled for opening night at Proctors. 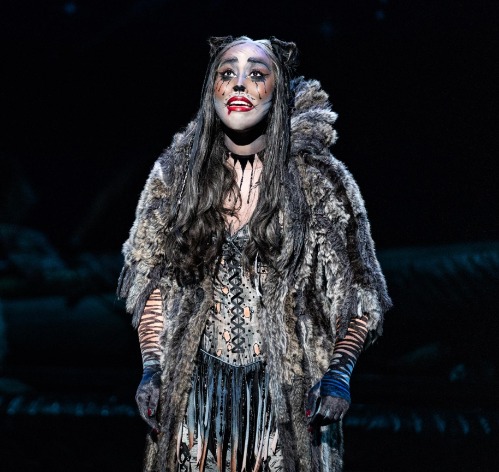 ﻿﻿If there are truly principal characters in this musical extravaganza, they are Old Deuteronomy, the cat who rules the day while the others play their roles, and Grizabella, old, decrepit, despised and reviled by the others. She gets to sing the show's only hit song, "Memory," a staple of award shows, elevators and take-out food shops on major city side streets. Made famous by Betty Buckley who originated the role, it has a catch-in-the-throat quality which is haunting and effective. In this current version of the show it is sung at least five times, an old-fashioned method for making sure the audience will remember it. Tayler Harris who plays the role sings the song most effectively and I didn't mind hearing it again and again if she was singing it. Like Richard Wagner's opera Die Meistersinger. . ." there is a prize for singing the best ballad in the best manner and that concept decides the outcome of the cats' ball, or bawl. Harris is a true find; she wins more than just the competition; she wins us also.

Indalecio de Jesus Valentin plays Old Deuteronomy and does a fine job with this pivotal role. In spite of his height and the magnificence of his costume he often faded into the crowd and disappearred only to suddenly show up at the right moment, another quirk of this show. If any actor in this company has to touch us Valentin seems the perfect choice with his clear acting ability and fime voice. I could wish there was more of this character in the play so we could have more of this actor.

I am, as I said at the beginning of this notice, allergic to cats and after all these years I seem to be allergic to this show, just as I was at the Winter Garden Theatre in New York in 1982. While I loved watching this stunningly beautiful production, I didn't really enjoy it. I will admit I liked the recent film version - I think I was one of eight people who did - because they gave the show a plot and a reason to watch it other than the dancing. Maybe I'm actually allergic to plotless musicals. 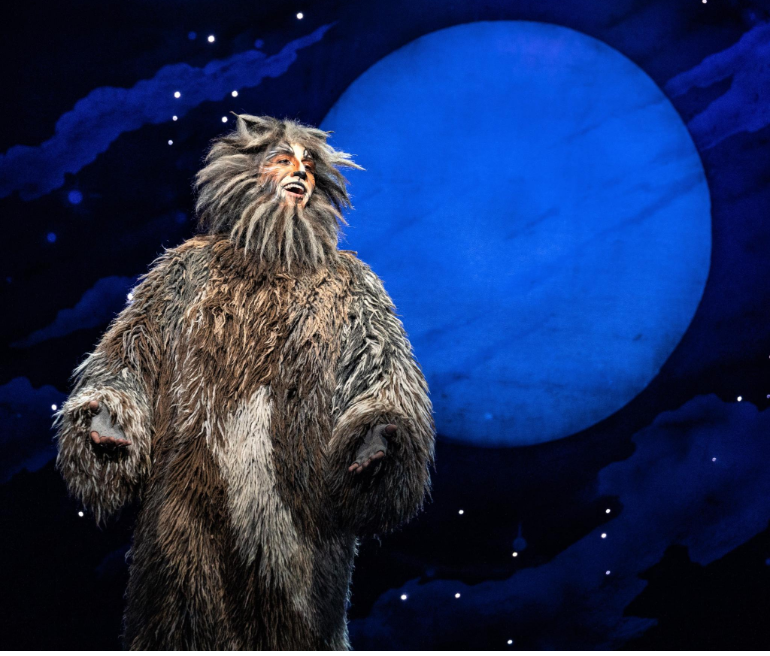 Cats plays at Proctors Theater, 432 State Street, Schenectady, NY through May 8. For information and tickets call 518-346-6204 or go to their website at www.proctors.org.