A small theft becomes a perceived mistake when a disturbed teenager commits suicide. That mistake turns into a small lie which transforms into a life-change for four people that is ultimately exposed as a scandalous con. That's the plot of "Dear Evan Hansen," a musical that should be hateful, but is instead engaging and charming and alarmingly realistic which is something a musical should never be. The national tour of this colossal Broadway hit is currently playing a week at Proctors Theatre in Schenectady, NY and it may be a replica of the New York City original, but there are definitive differences. Chief among them is Evan himself. Ben Platt, who played Evan originally is a baritone whose strong voice exemplified his strong personality which gave his Evan a strength that is avoided in the script; that made his character enigmatic for Evan is a weakling suffering from long-term anxiety and a social ineptitude from which he shouldn't suffer. The tour's Evan, Stephen Christopher Anthony, is vocally a tenor who constantly shoves his voice into a weak falsetto which amplifies the character's displayed weaknesses.  In some ways this makes the high school senior slightly more loveable even though it makes him a bit hard to take.

This is a small show with eight principal characters and virtual chorus (called "Community Voices") and like "Funny Girl" the title character only has about two minutes off-stage in the entire two-and-a-half-hour show. I have to admire the stamina of any actor who can manage that, and Mr. Anthony pulls this off beautifully. Director Michael Greif keeps placing his lead actor in new spots on the large stage so that each scene appears to require an entrance for Evan, but he rarely moves into place. He is just there, like a minor miracle. The suicide by school bully Connor Murphy, played here very well by Nikhil Saboo who makes Connor a loveable rogue. His family - Father Larry, Mother Cynthia and Sister Zoe - are played effectively by John Hemphill, Claire Rankin and Stephanie LaRochelle. They successfully portray a family accustomed to being wealthy and still grateful to Evan who is not in their social class. It the irony of the show's book that Evan has admired a distant Zoe and the lie brings her to his side as a potential girlfriend. 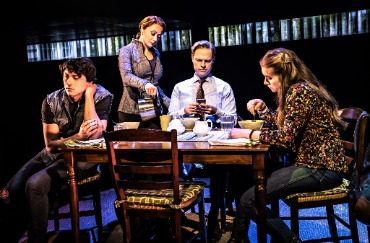 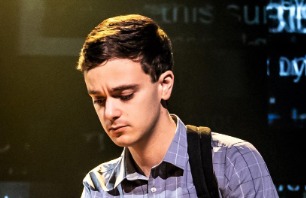 The songs in the show share the credit for its success with the actors and the show's talented designers: David Korins scenic design, Japhy Weideman's lighting design, Nevin

Steinberg's sound design, and Peter Nigrini's projection design. The team works wonders and when the final set change happens the show suddenly lives up to its hit song "For Forever." 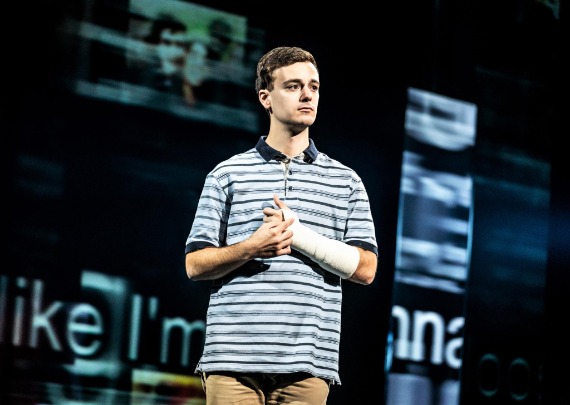 Two other actors in this production make a fine stab at their characters. Among the most unpleasant teen-agers in recent musical theater, Alana Beck and Jared Kleinman are played to perfection by Ciara Alyce Harris and Allesandro Costantini. She perfectly depicts a cloying climber, and he is a manipulative soul who aids in the corruption of the almost innocent Evan.

As Evan's mother Jessica E. Sherman pulls off a miracle as she adds a dramatic climax to a violent scene with a difficult song which she delivers masterfully. How she can manage this eight times a week is a tribute to her talent and mastery of the art of musical theater acting. 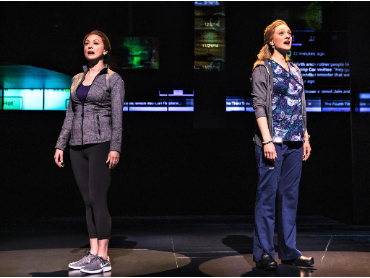 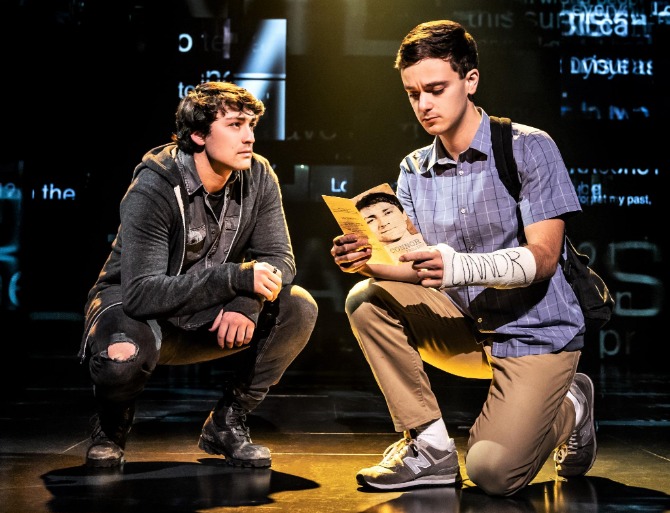 "Dear Evan Hansen" is a show you won't forget. Its characters and themes will haunt you just a bit at odd moments. People you meet will cause you to think about these characters as portrayed in this production. You may wake up suddenly from a sound sleep and find yourself remembering kids you knew, kids you heard about and kids you may have raised, and you'll wonder what became of them. Terms of honor will constrict your heart and brain occasionally as a moment from this show passes before your eyes. Impossible friendships will enter your life occasionally and you'll think about Connor Murphy and his suicide. That is the strength of this show and the people who play its characters. Sounds you hear in your corporate headquarters or your grandchild's bedroom will bring up images of the pre-show projections and sound effects. A good show can have such an effect on our brains and this show is that good. It's just peculiar and that quality contains its basic strengths. See it while you can and savor all of its qualities.  "All you see is sky, for forever."