"The last of the Fitchwoods."

Historically a comedy is a play in which nobody dies. Eric Pfeffinger's comedy "Fourteen Funerals" begins after the entire Fitchwood family of Blissfield, Indiana are killed in a freak fireworks accident. The last surviving Fitchwood descendant who has never known a single member of her family, is tempted to leave Chicago for Blissfield with the concept of "legacy," or more specifically, inheritance, to organize and officiate at the funerals of her blood-relation-strangers. The hour and forty-five minute one-act play lets us watch her journey through family history and emotional growth. Sienna, played by Haley Wong, falls into the trap laid by Millie, the Mortician's daughter, played by Montana Lampert Hoover in this first east coast production presented by Bridge Street Theatre in Catskill, New York. The first thing you really need to know is that this comedy is actually funny. It is a tongue-in-cheek laugher with a sense of human strengths and failings. Neither woman in this play is good at relationships or even friendships. Brought together through these odd circumstances they develop a working arrangement that often peeks outside the professional side and into the personal. Their working relationship is the two-week joy-ride of a lifetime.

Sienna slowly learns the facts of her background that her mother never revealed to her. We laugh at her ignorance and at her revelations. We laugh at her improvised eulogies about the total strangers who have died. As we do we wonder how such indifference can have happened, but we don't have time to dwell on this because the play moves along at a pace that is sometimes breathtaking. The playwright piles reality upon reality until the quirkiness of the Fitchwoods begins to show through the rigid facade of Sienna. She has her quirks as well and though well-hidden at the beginning, by the fourth eulogy they begin to reveal themselves.

Likewise, Millie has personality quirks of her own and they are doozies. The play becomes a juggling match as both women keep their problems on the edge of their words and in their faces. It's a shooting match witihout guns, a tours-de-force (plual) of oddness and secrecy. i 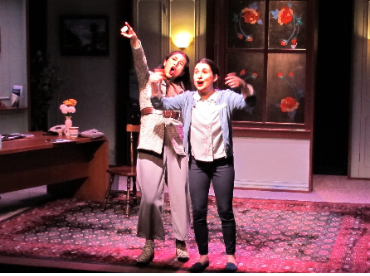 Montana Lampert Hoover does some remarkable acting under the direction of her mother Sara Lampert Hoover. Her physical realization of Millie takes her into and out of moments with a fully developed personality that transcends the words of the play. She is more than an actress; she is an actress playing a woman who must become an actress to convince another woman of her own sincerity. The double level of reliability in this role is nothing short of remarkable. Hoover masters nervousness with the same intensity with which she plays love scenes, historical lectures, and moral judgements. She plays fear as efectively as she plays compassion. She also plays these human qualities back-to-back without batting an eyelash or missing a beat. It works to the comedy of the piece brilliantly. In a dowdy costume, perfectly designed by Alexis Costa, her professional character loses nothing but her femininity. This is brought back when needed by Sara Hoover's abrupt staging and that works so very well.

﻿The play is set in Millie's funeral home office, designed by John Sowle, a set that does its job nicely. The play's moments are highlighted by Sowle's facile lighting which, perfectly called by stage manager Sarah Foster, never cease to keep us moving forward, onward and wayward through the fourteen eulogies that make up the comedy of the play. 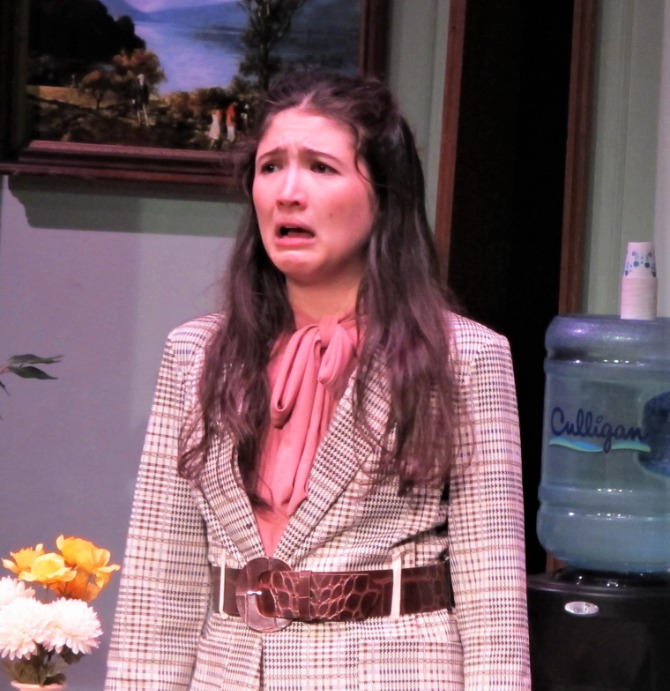 Haley Wong understands passion, anger and disbelief and she plays these elements in constantly changing order without ever missing a beat. Each of these elements feels real and exact and when the comedy in each change emerges from the shadows of Sienna's life there is almost a sigh of relief, for the author has prepared us to be suspicious, to be understanding and to be accepting. Wong is a wonderful Sienna. She is beautiful, stylish and yet never enticing. When emotion gets the better of both Sienna and Millie, it is the surprise that Wong brings into it that makes us laugh with more warmth than ridicule. She has amazing abilities in the physical and the verbal arts.

The entire dead Fitchwood family live in her spoken eulogies and as well-written as they are by Pfeffinger, it is Wong's delivery of them that bring life to bear in the world of the dead. She adds character to each of them where no character has been seen before. Her honesty in the playing here builds to a climax in the final scene where Millie's manipulative gestures nearly bring Sienna to tears. She makes us wonder, for a moment, if a future relationship is even possible, but her handling of the moment indicates we already know to be true about both women

Once again director Sara Lampert Hoover's work shines through Wong's interpretation of Sienna. What the director has done with the actress is to give Sienna a formidable personality whose words always have an equal weight with her physical presentation. When she shows anger, we feel that anger. When she shows appreciation, we are touched by it. It is wonderful work all the way round.