"Take the time you're given."

Advice is hard to take, especially from the older generation. This is just common knowledge, but it escapes everyone until it makes too much sense to ignore. I was advised, for example, to give "Pippin" time, that I would like it eventually. It has never been among my favorite musicals. I saw it back in 1972 when it was new. I've seen it four more times when it was no longer new and neither was I. I didn't like it. Now I am older, as old as Pippin's grandmother Bertha. I saw the show last night at the Mac-Haydn Theatre in Chatham, NY and I have to admit I not only liked it, I loved it. I ask myself "what happened?" Well, with time and with exquisite production values that honor the text of the Roger O. Hirsch book of the show director John Saunders has brought the show to me. Gone are the Bob Fosse quirks and awkward movements that everyone before now has forced upon me. Gone are the cutsie bits. In their place is a showcase for creative talents. This edition gives us the traveling troupe of players who have done this play many, many times, the generations passing along traditions, the musical variables that new singers add to tired songs, and the thrilling movement of choreographer Elizabeth McGuire.

﻿The Mac-Haydn Theatre has opened its shortened though jam-packed 2021 season with a winner. New, fresh faces along with trusted old friends fill their reconceived stage. Fine singers and dancers take this old chestnut to new heights as many of them discover the show for the first time. Nothing freshens old theater quite like a new generation making it their own without reference to the original. This production is the proof of that theory. Clementine Kline as Thea and Maya Cuevas as her mother, Catherine, are the proof. Liz Gurland as Bertha adds a vigorous sensibility to the proceedings. With her one number she invigorates the show. Cuevas manages to do the same thing with a moment that has always seemed false before. Her rendition of "I Guess I'll Miss the Man" felt right to me for the first time ever taking on its intended double meaning. 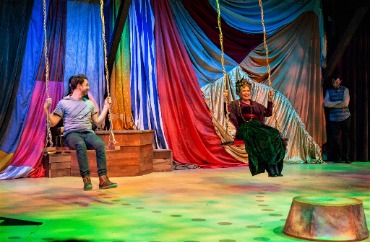 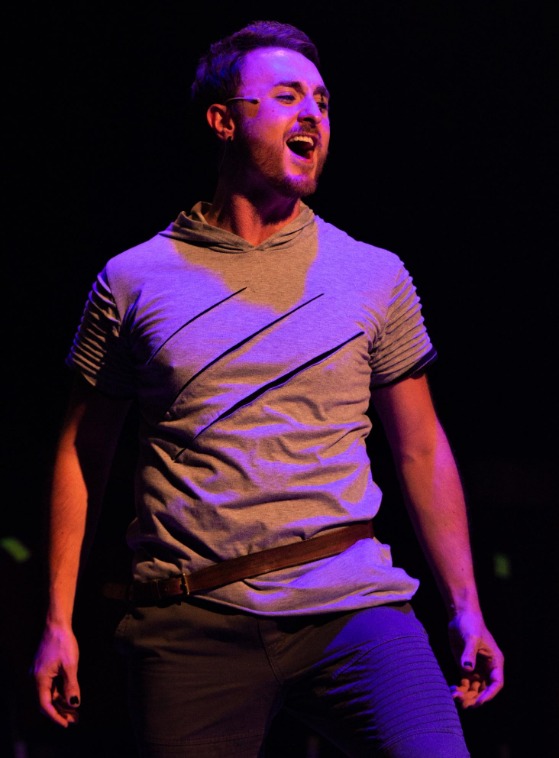 Kylan Ross uses his lisp to bring a youthfulness to the title character that was utterly charming. His introduction song "Corner of the Sky," once the most popular audition song in existence, felt absolutely right in his hands. Pippin actually grew as a character as the book progressed. He is both a talented actor and singer which he proved during the two hour and fifteen minute evening. 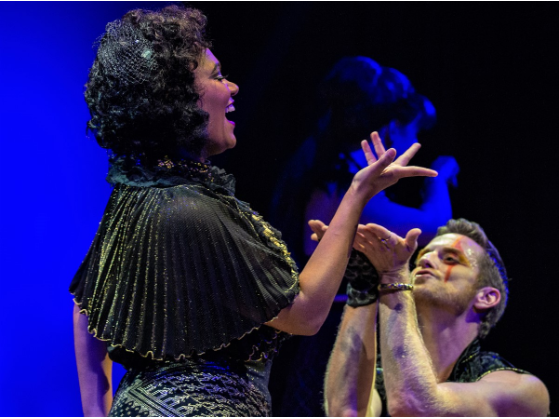 As the Leading Player Amber Mawande-Spytek takes her audience on the authors' journey. She is deliberate, forceful and dynamic in this role and she delivers every moment with an assertive quality that is both endearing and alarming. I can easily picture her at a woman's rights rally rallying her troops,  enabling individuals while tamping down the masses.  Mawande-Spytek  maintains control beautifully  She sings, acts and moves through the show like an independent rising star who knows that the show isn't hers, but runs it anyway.

Her assistant, Player with Fire, is performed by David Aaron. He is a truly magnificent performer. The physical opposite to Kylan Ross and the other men in the show, a superb dancer, himself a choreographer whose work was seen here in "Xanadu" back in 2015, his movements were absolutely riveting. You almost get the feeling that the Leading Player has kept him for herself for her own amusement, their interplay has an intimate quality. Saunders, without a word added to script makes them into a counterpoint for Pippin and Catherine and their difficult romance as observed in her final song.

M﻿ikel Hunter does a fine job as Charles as does Andrew Burton Kelley as Lewis. Their mutual relative, Fastrada , is well performed by Ashley DeLane Burger. The entire company performs well, vocally and physically.

The costumes designed by Angela Carstensen are perfect for this production as are the sets by Emma Cummings who uses the new and enlarged stage wonderfully. The highly colorful lighting adds mightily, designed by Andrew Gmoser. Sound was good, designed and run by Corbin Whiite.

I never anticipated recommending "Pippin" to anyone but this I do wholeheartedly this time around. Never liking something, it appears, needn't be forever, a lifetime aversion. Brilliant insight can turn things around as John Saunders  version of this show proves.

Pippin plays at the Mac-Haydn Theatre, 1925 Routse 203 in Chatham, NY through August 8. For information and tickets call 518-392-9292 oo go to their website at www.machaydntheatre.org