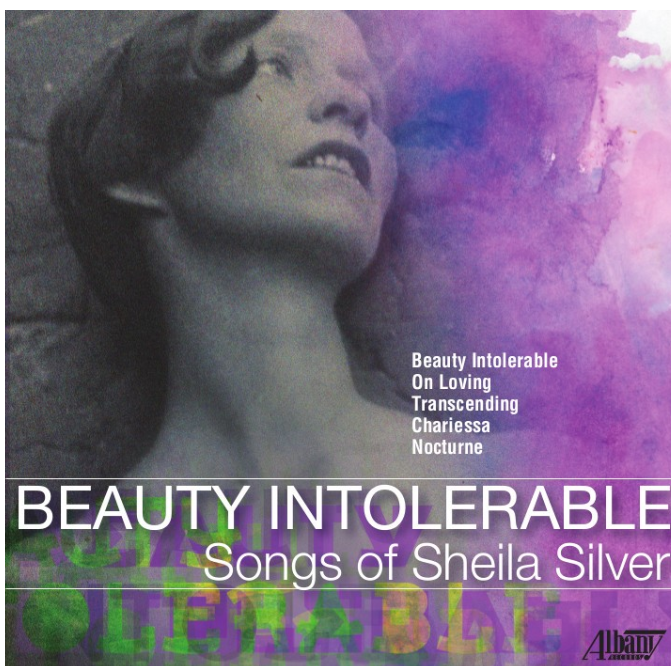 In 2012 conductor Gwen Gould introduced me to composer Sheila Silver on the street in Chatham, NY. It was the start of a tempestuous year for me, surrounding Sheila’s composition and premiere of the suite of songs she titled “Beauty Intolerable.” It was written for three female voices, piano and speaker, a woman who would recite each of the poems of Edna St. Vincent Millay before the musicalization of that poem would be sung. I arranged for friends of mine, Tyne Daly to be the speaker for the first performance of the work in Hudson, NY and Tandy Cronyn (daughter of Hume Cronyn and Jessica Tandy) to be the voice of Millay at Symphony Space in New York City, both in June, 2013 (by the end of that year I had ended my seven year connection with the Millay Society). My friend Dona Vaughn staged the song cycle. I attended both performances and was eager to have the work recorded. Now, at last, here it is.

Both Sheila and Vincent Millay impacted the world of vocal music. Sheila has written other song cycles, though nothing as extensive and complex as her Millay songbook. This new two CD set takes a long look at Silver’s work, brings us all of her songs. The groups include “On Loving” written in memory of Diane Kalish (which includes another setting of a Millay poem) dates from 2011. “Transcending” written in memory of Michael Dash was written in 1995. “Chariessa,” a group of settings of the fragments of poetry by Sappho dates from 1977-78. Curiously, as if to round the circle of Millay, our poet was inspired also by Sappho who even appears in some of Vincent Millay’s poetry. Millay had a great personal success as the librettist for the Metropolitan Opera’s “The King’s Henchman,” music by Deems Taylor; Sheila Silver is a career opera composer. Millay set many of her Lyric poetry to music and set two lyrics by playwright Floyd Dell which she sang in his play. All things work in harmony, cacophony and melody here. The CD set also includes a short suite of four songs drawn from “Beauty Intolerable” arranged for contralto Stephanie Blythe who worked for me early in her career at the Berkshire Opera in Lenox, MA. And just to keep things interesting there is a solo piano work, “Nocturne” commissioned for Gilbert Kalish’s Chamber Music Society of Lincoln Center and premiered by him in 2015. He plays it brilliantly on this CD set.

At the premiere of “Beauty Intolerable” the singers were Deanne Meek, Risa Renae Harman and Lauren Flanagan. For the recording Flanagan is replaced by Lucy Fitz Gibbon and Dawn Upshaw. Upshaw is also the singer for the three songs in “On Loving” which includes Millay’s “Mindful of You.” It would have been nice to hear the poetry on this recording as we did in the live performances. It was a great help to her the poems, their particular cadences and rhyme schemes as poetry. Instead this CD provides printed texts which do help as Silver’s settings are complex and sometimes wonderfully chaotic as befits the poetry.

It is very interesting to hear the progress of the composer’s style from the mid-1970s to today. What changes the most is the complexity of settings from the radically progressive of the past to the overwhelmingly discordant of the present. Her musical work is consistent, however she brings more underscoring into the recent work and the final impact of the poems she has chosen to work with is often lessened through the layered musicality she employs.

Each time I listen to “Beauty Intolerable” I am swept into foreign worlds that alter with each hearing. For pure rendering of texts I prefer Silver's “Transcending” which uses the poetry of W. B. Yeats, H.D. Thoreau and Paul Laurence Dunbar. Also, the baritone voice of Sidney Outlaw brings both a gravity and a graveness to these songs which clearly make them resound in memory. In much the same way Stephanie Blythe’s deeper tones make her quartet of songs from the principal work (B. I.) cleaner and clearer than the soprano renderings in the full work. Both of these short song-groups should receive many performances.

Upshaw’s work in “On Loving” with texts by Millay, Shakespeare and Kahlil Gibran, is superb. She sings these songs with a joyous ring that makes even the most solemn lyric pay off beautifully: “For I never saw true beauty till this night.”

This collection of songs from an inspired composer will often grace my player. It will take many hearings to set them all in my mind and memory. To know I played even a small part in their creation and their introduction is a cheery thought to cherish. I hope that everyone reading these reflections will add the CD into their collection and make the songs a constant presence in their lives.