Holiday Memories, by Russell Vandenbroucke
based on two stories by Truman Capote

"It doesn't seem any different."

The 1930s may seem like a long time ago, but the 2020s﻿﻿﻿ are a close approximation of those days as you watch excellent artists portray young Truman Capote and his depression-era family in HOLIDAY MEMORIES, a theatricalization of his short stories currently on  stage at the Berkshire Theatre Group's courtyard theater space outside their second stage, The Unicorn, in Stockbridge, MA. In this dark era between Autumn and Christmas you regaled with a look at the young boy preparing for Thanksgiving and Christmas as a bright youngster of seven tied to the apron-strings of his cousin Sook, a more than middle-aged woman who sees in him the early signs of intellect - the very thing we are told in middle-aged Truman's memorial memories of his own childhood. Sook is considered to be little more than a child herself, uneducated and mentally incapable, we are told and I have seen her played that way in past productions. But here she appears much more normal than usual. More than  expected I should say and may be because of how this version of Truman remembers Miss Sook Falk: articulate, funny, warm, affectionate, sensible and  deeply honored to be in a very adult relationship with her very young cousin.

Truman is played by David Adkins who brings the man a delicate elegance that cannot entirely avoid his Arkansas rustication as he narrates his own story from a discreet distance.﻿ His refined manners are the result of education and life in sophisticated New York where he has put behind him all the waste of a childhood in the battered and grim country life of an abandoned bumpkin. He maintains a cold attitude about his childhood but he is clearly the core of Holly Golightly  in the flesh, denying recalling things with a spatter of gold dust where there was only dust, with a gilded spirit where there was actually no gold at all, but only a worthless cameo treasured for its promise of great future wealth.

Adkins brings all of this to his portrayal, appearing as an immovable narrator of realities while actually a passionate re-writer of personal history. He flees, when it is necessary, from the truth of incidents in his formative years. He indulges in the sweetness of his cousin's devotion. Adkins makes this dichotomy seem normal and perhaps it is. His Truman is not a self-indulgent man, though he does dwell on the most simple things, Sook's engagement with her dog, for example, more often than on other things, like his own education and his relationships with other kids, even when they're important to the story. The actor never dwells on what is essential, only on what is important to Buddy, his younger self. 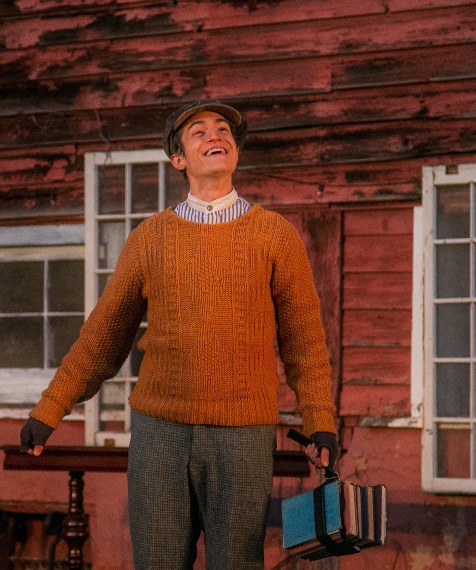 Buddy is played by Tim Jones who cannot be seven or sound seven. His young Truman is a young man trapped in a world of aging children like himself, personified by Miss Sook. He moves, sounds and looks like the man Truman was when he wrote the holiday stories; he was 32 in 1956 (two years before Breakfast at Tiffany's). Photos of the man taken ten years earlier appear to be a boy of 15. This agelessness of the man works in Jones' advantage as the boy. In this play he feels older than seven, older than a second grader. As Jones moves through the play the character's actual age becomes less important; he is a young Truman and that's all that matters.

One reason for that is Jones himself. He is an able actor interpreting a role written for a young attractive man to play. The reality of that is what makes the play believable. His relationship with his older cousin is what is important for the story really belongs to her. In the one photograph I've seen of her with Buddy she is clearly a woman of sixty or more years and he s about five years old. There is a strange resemblance between them, though, and each displays a confidence that normally belongs to safely well-established people; except for one moment in the first act Jones puts that across beautifully and the scene of insecurity brings him to that unique world of intellectually childish confusion with an equal self-assurance.

Corinna May, aged for this show, is nowhere near old enough to be a completely convincing old woman. She is young in spirit which Sook must have been and she is often younger than Buddy which is as it should be. If there's anyoone at fault here it is the playwright who does not convincingly write the character as young-in-head as he does young-at-heart. Not even an actress as talented as Miss May can make me believe that her wits are limited.

Truman tells us that his cousin was challenged but nowhere do I see that on this stage. Instead I saw only a woman who thoroughly  understands what a child is, goes through and needs. She makes Buddy grow but leaves him to live through those formative years as he must. May never plays her silly, stilted or unsure. She is a simpler Blanche DuBois who knows men and how to manipulate them,how to get the dime she needs to buy a movie ticket for Buddy, but who never extends herself into the un-needful to get anything more than the practical. She is the better side of Blanche, the Holly grown beyond senseless parties. Corinna May creates a new woman. 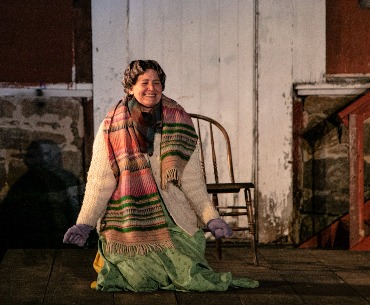 The rest of the﻿ company are fine in their  various roles﻿. Daniel Garrity and Isadora Wolfe play everything from a twelve year old bully and a whiskey bootlegger. a widow,and a piano-playing schoolgirl with equal honesty and reality. They are both in Truman's memory and in Sook;s reality and they coexist beautifully under the fine staging and interpretation of director Eric Hill. 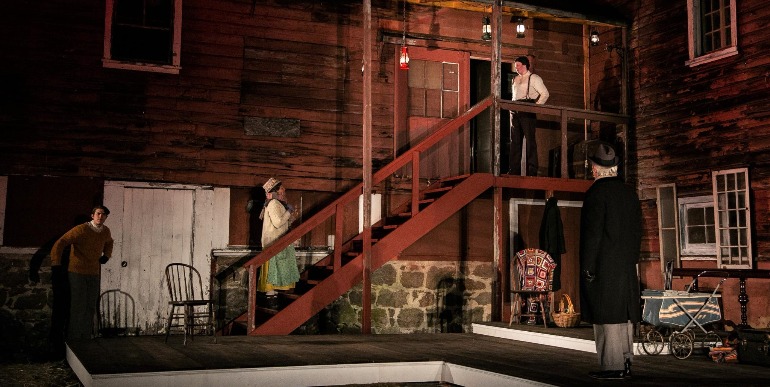 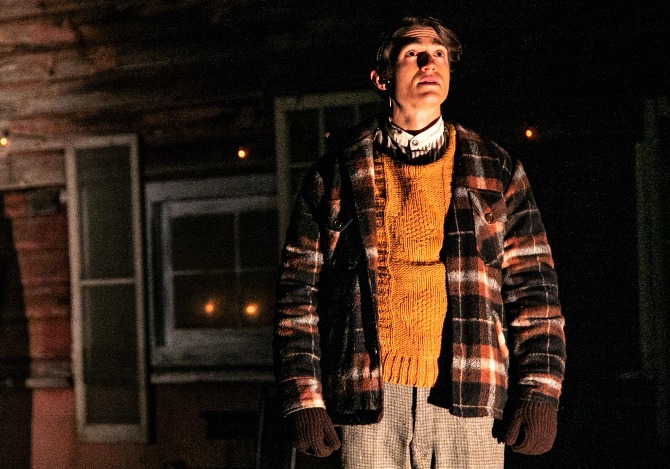 A word of caution is necessary here. Enjoyment of this play depends as much on you as it does on the acting company. Not only must you watch and listen carefully, for some things may mystify you, the theatre is in a courtyard without roof or heat. You must dress warmly, especially at evening performances when the temperature is likely to drop, and you must remember that the play only resembles our time. 'The play takes us back well before Donald Trump was born. It may remind you of how it was then, as the play does for its narrator; so much depends upon what the author/character remembers; so much depends on what you remember as well. This play is meant for each of us and we take from it what we bring to it - although just slightly altered thanks to all the artists involved including all of the designers, the actors, the storytellers and the director and producer. We have been given a year-end present here, a gift we will long-remember. Take good care of it.

HOLIDAY MEMORIES  will be performed ﻿at the Courtyard behind the The Unicorn Theatre through December 20 with shows at 3:00 and 6:30 on certain days (consult the BTG website for full  schedule. Reservations are a must as the seating is limited. Face masks MUST be worn. Seating is on benches and cushions and blankets are recommended. The website is www.BerkshireTheatreGroup.org.