"Do you not take me seriously?"

A world premiere of a play is always an exciting thing to attend. It's fresh and new and a nervousness pervades the air. . .usually. Oddly, I sensed little of that at Barrington Stage Company's recently commissioned play "Andy Warhol in Iran," a fascinating piece presented by a very good cast on the St. Germain Stage in Pittsfield, Massachusetts. The play has a good story to tell and good actors to put it across. The director has staged it appropriately with dangerous moments and a splash of suspense at times. There is little to argue with in the choices made for this first production, but small things about the play bothered me. The author, Brent Askari, delivered better drama in his play "American Underground" three years ago. This time he opens his dramady with a lengthy monologue that tells the audience who Andy Warhol is, which is something that most people know, and anyone who doesn't learns enough about him in the dialogue that follows to feel comfortable watching a play about him. Several more times the character of Warhol steps out of the action to monologize about Warhol's life and his choices and his relationship to family, to friends, to the world. They break the action, the drama of the play, and serve very little purpose. They are well-written and well performed and would probably work very well in a dramatic lecture about the artist. In this play, though, they just separate us from the action of the play which is a mistake. The play doesn't need them; it doesn't suffer from them; it merely keeps the audience at arms-length from the play's focus and its dramatic performance.

To wonder if there's any truth to the story keeps itds watchers fascinated. I don't usually look forward to author's comments in a program, but here I would have liked one, just a bit of explanation. In the mid-1970s Warhol began work, after an artistic hiatus, on celebrity portraits including Liza Minnelli, Bianca and Mick Jagger and others including ruling class subjects such as Chairman Mao and Shah of Iran Mohammad Reza Pahlavi, his wife Empress Farah Pahlavi, and his sister Princess Ashraf Pahlavis. The play has Warhol in a hotel room in Tehran where he is contemplating taking Polaroids of Empress Farah for an eventual portrait. It is there, in his hotel room, where he meets Farhad, a waiter/revolutionary who has come to kidnap Warhol for political pressure. 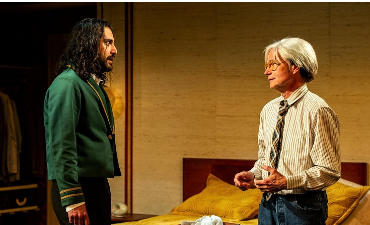 Warhol is played by Henry Stram who manages to look a great deal like the character he is playing. I knew Andy Warhol a few years prior to the date of the play and Stran did not bring me back to the man I met at that time. However, as a character for a general audience, his A.W. will do nicely. He plays Warhol's characteristics very well and presents an excellent image of what the artist may well have been like facing the situation in which he finds himself in this play. Stram is a good actor and never overdoes a moment, and there are many where he could go wild and ham it up. He keeps Warhol real and even makes some of the mood-breaking monologues work, stepping back into the action without making us totally uncomfortable. His Warhol voice and his actor/explainer voice are different, but as we are meant to understand that Andy Warhol himself is telling his own story it is hard to understand why he has adopted two styles of vocal delivery here. 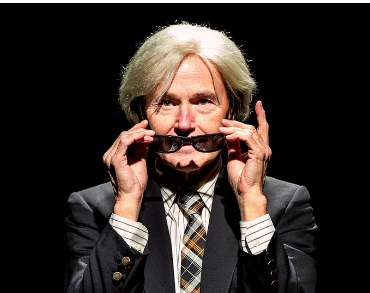 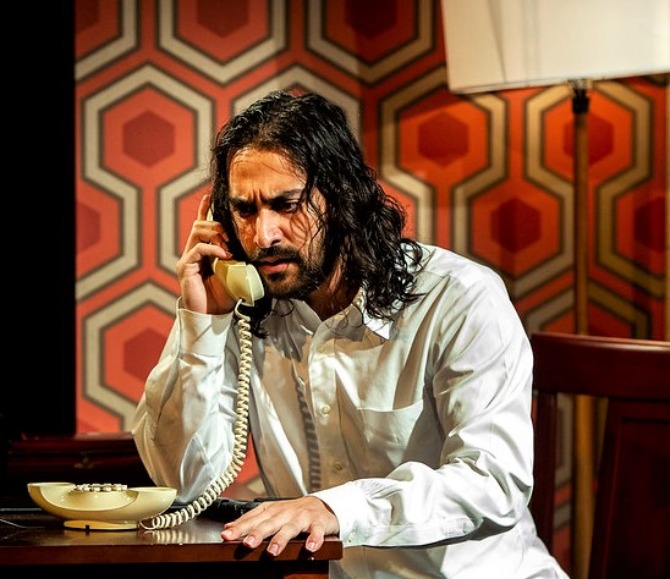 Nima Rakshanifar plays Farhad, the Iranian National who interferes with Warhol's life for an hour or so, causing much distress and drama and comedy. The only thing missing from his role is a sexual threat to the American artist, even after the basic physical and intellectual diminutions Farhad throws in Warhol's path. He is an Iranian-American actor so this part is not a stretch for him and he plays threatening well and when he falls apart his drama is human enough to be funny but he is never out of step with the author's character. He is a charming actor I look forward to seeing more of him in the future.

Bo﻿﻿th actors are well directed by Skip Greer who keeps the pace of the play, which varies in the writing, as consistent as is possible. The play is set in a hotel room well designed by Brian Prather. The costumes have been created by Nicole Wee with wigs and makeup designed by Mary Schilling-Martin. The excellent projection design by Yana Biryukova and lighting design by Joyce Liao enhance the erratic elements of the script. Dan Roach's sound design work is never intrusive and lends an ambiance of timelessness to this stage work.

A new play is always worthwhile watching. When the source material is this intriguing and the creative talent so good at what they do it is doubly so. And who knows?. . . perhaps the next production of Barrington Stage's commissioned work, will be even better.﻿

Andy Warhol in Iran plays on the St. Germain stage at Barrington Stage Company's Sydelle and Lee Blatt Center, Linden Street, Pittsfield, MA through June 25.  For information and tickets call the box office at 413-236-8888 or go to the company's website at www.barringtonstageco.org.