The Haunting of Hill House by F. Andrew Leslie

based on the novel by Shirley Jackson.

Hill House, presumably in North Bennington, VT, has a mind of its own. Fiction writer Shirley Jackson, when she lived there in the 1950s wrote her very successful novel within sight of  the Park McCullough mansion (now a museum and the home of The Living Room Theatre) and that it and another fabulous old mansion served as inspiration for her. The book was later filmed with Julie Harris, Claire Bloom,  Richard Johnson and Russ Tamblyn, a stark black and white classic horror film which has never been bested ( a later remake and a TV mini-series couldn't measure up to it). Now, as a play, Hill House has returned to its roots in a stage production by the Bennington Community Theater at The Bennington Performing Arts Center. The play, written by F. Andrew Leslie, is an overly wordy piece, often sounding a bit too clinical. It takes almost three hours to perform. It is a melodrama and for melodrama to make a resounding hit there are rules that must be obeyed in playing style. Unfortunately  Robert Ebert, the director of the play, seems to have ignored the play's form and moved his company in a different direction. I say, unfortunately, because the play  offers some excellent performances but it doesn't truly hang together as it should. Part of the reason may be the inexperience of the actors in playing this sort of play..﻿

Melodrama is a world of its own.  Movement is subtle, the spoken word is meaningfully mundane and even the setting has a less-than-subtle stability within which less than subtle things occur. David V. Groupe's set for this play, encompassing two rooms in the mansion, works very well and has just the right touch of the period of the piece, although its furniture may be a bit too playful, too fresh and new. Lighting Designer Goupe and the director have worked together to create excellent mood pictures while giving us the characters expertly. In addition. to the seven-member cast of players a backstage crew of five people manipulate the set to create the perfectly eerie special effects, bringing Hill House vibrantly and scarily alive. Doors close by themselves, strange lights appear and disappear, sounds, created by Corey Wheat and Drew Davidson,  blast and chill the spines of the unsuspecting audience., This is all well played and frankly make the play go by as quickly as possible. 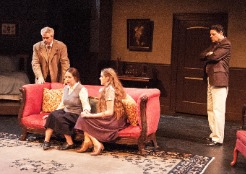 Dr. Montague (Evan Pringle) has assembled a small group of participants for his examination of Hill House, its inevitable heir Luke Sanderson (Brian Barney), a professional mystic named Theodora (Emma Jansch), and Eleanor Vance (Tess McHugh) a woman who has experienced and may have caused  supernatural phenomena in her youth. They are eventually joined by Mrs. Montague and her companion/assistant Arthur (Mike Cutler). Rounding out the cast is the annoying housekeeper Mrs. Dudley (Debby Goldman). Goldman is terrific. She gives the play its local color with her short statements and her lack of ivolvement interest. She sets exactly the right tone for the play. Easily her equal in the melodramatic  sensibilities is McHugh's Eleanor. Distanced, desperate for attention and emotionally vulnerable Eleanor quickly becomes the "person of interest" in this play as the house begins to pursue her for its own possibilities. McHugh is well under the top, as opposed to other over-the-top players in the company. She understands the role and the style of the play and makes excellent use of the material. 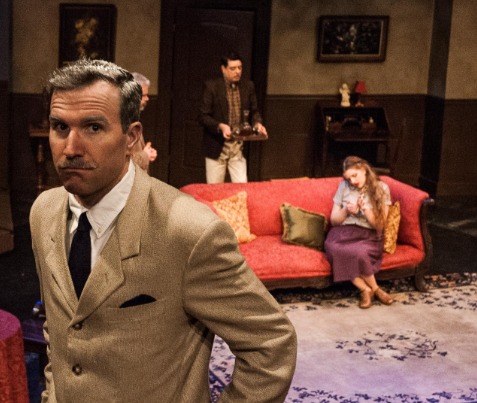 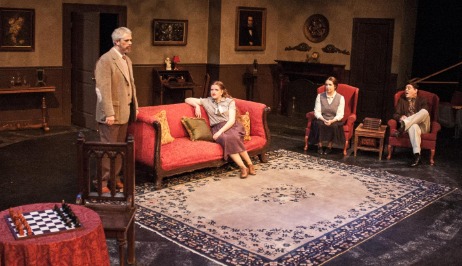 Mike Cutler does well as Arthur. He is good at playing cynicism which helps a lot. The Montagues are a combination of under-playing (Pringle) and overplaying  (King) and neither one catches the necessary style of the play. As the one character who has a chance at emotional growth in the script, Brian Birney keeps his performance stalled in its first impression. He's good but not very interesting. Jansch's Theo is hard to believe ranging from too cynical to mostly annoying when she rejects the reaction to her intense flirting. Thank goodness for the well-played characters in this production; they keep the show as alive as Hill House itself.

The Haunting of Hill House plays at the Bennington Performing Arts Center, 331 Main Street, Bennington, Vt through November 7. For information and tickets contact the box office at (802) 447-0564 or go on line at bpacvt.otg.