Parody leads to comedy, as they say. But sometimes it also leads to pathos. Fred Barton's "Miss Gulch Returns!" is an excellent example of the former, as seen at Bridge Street Theatre in Catskill, NY at a final dress rehearsal last night. To my surprise in the superb hands of Steven Patterson under John Sowle's direction it also leads to pathos and sympathy as the two characters seen on stage travel through so much more than anticipated. Patterson plays a nightclub singer who during the opening refrains of his act, one night, notices a homely woman alone at a table with a bicycle parked behind it and a yellow wicker basket at her feet. She instantly intrigues him. Then as he engages her in conversation he becomes attracted to this unpleasant person. He fantasizes about what she must feel about him and the fantasizing becomes a reality. She is Miss Gulch, Dorothy Gale's Miss Gulch whom no one likes, kidnapper of Dorothy's dog, Toto. It's no wonder nobody likes her. 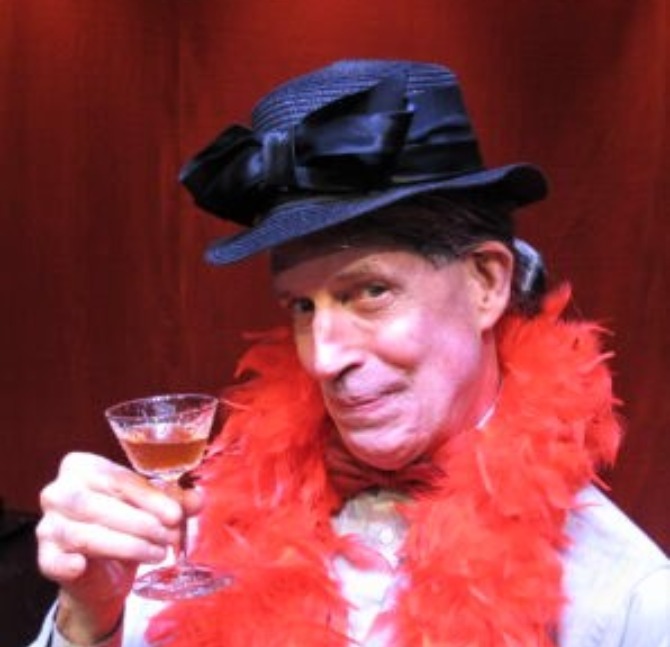 Gulch has had a difficult life starting with her christening, it would seem, as Almira. A friendless youth followed by a friendless adulthood has left her bitter, without a dream to sustain her, Considered a witch (she prefers bitch) she has developed a hard skin, aloof to criticism and scorn, she lives a slightly drunken life with this night club her only source of pleasure and amusement. When the middle-aged singer imposes himself on her she slips into the confusion of personalities and allows herself the opportunity to take a long, hard look at herself. It's a musical investigation and it seems her obsession with Judy Garland may be at the bottom of her distorted personality. Was she, Almira Gulch, "born"  on a bike? or only "borne" on a bike? or possibly "bourn "on a bike?  she is just  not sure. What she does know is that the film about her life was faulty: her only number was cut before the film's release and it's a song she needs to sing, so she does. Self-revelatory about the film's character and her own (for we know that no movie bio-pic is ever accurate) it leads to a state of confession and Gulch has a secret love story to tell.

What the play never does, thank goodness, is destroy our favorite movie villainess, the Almira Gulch who morphs, during the tornado, into the Wicked Witch of the East and then her twin sister, the Wicked Witch of the West (as played by Margaret Hamilton). Instead﻿ it transforms this hard-drinking, self-pitying woman played by Patterson, into the embodiment, or role-model, for L. Frank Baum's literary creation. While it entertains us with witty song parodies it also reveals Gulch in a way that leaves us sympathetic to her and her unfulfilled life. Patterson is marvelous playing both the real and the film Gulch. He never attempts to be Hamilton which is just right. Without any imitation he gives us as much Gulch as possible. And by the time he becomes that male singer again, we have inherited Miss Gulch as recipients of her personal truth. This isn't necessarily a great play, but it is great theater thanks to the actor and his director, John Sowle. Sowle's vision of this character is one of elevation. He lets us know that we can each be center of attention as our own story unfolds, that we don't have to settle in as a shadow of someone else's self-interest. From his perspective, no matter how often Garland is referenced and reverenced, Almira Gulch IS the story and no one else.

As the singer's partner and accompanist, Tom Judson is at the piano. He knows not only movie underscore and the singer's repertoire, he also plays perfectly for Miss Gulch; now that's what I call genius! But seriously Judson does more than merely "well" on stage, he is the perfect partner for Patterson's two characters. John Sowle has also designed the set which works perfectly and Michelle Rogers has given the actor excellent costumes that help to define the two  people on stage. Fred Barton has written and composed this piece and his talent is evident in every word spoken and sung. It's a fine entertainment that will leave you thinking. 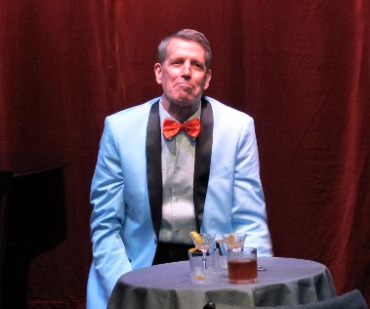 Miss Gulch Returns! plays at Bridge Street Theater at 45 Bridge Street, Catskill, NY through September 19. For information and tickets go to their website at www.bridgestreettheatre.org.