Searching for new plays can be difficult, but when an Artistic Director of a small professional company writes one, workshops it and builds it from a ten-minu﻿te sketch into a play into a full-length play and then commits to giving it an expensive production try-out that person deserves applause.﻿﻿ When it turns out to be excellent then that creative manager deserves more than just applause. That is the case for "Lucy's Wedding."﻿ 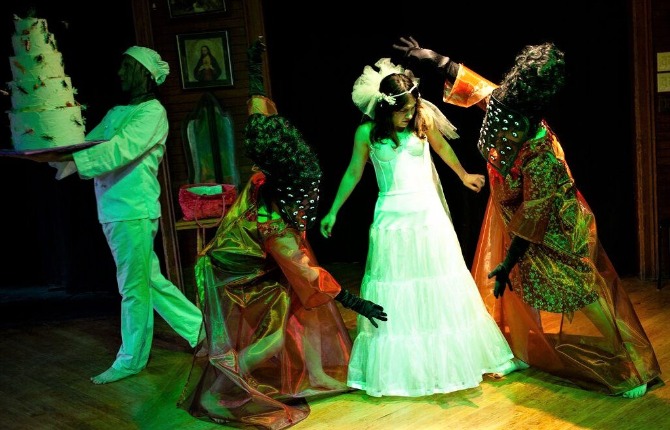 In a midwestern town Lucy is about to marry Cal. It is a wedding fraught with problems and ultimately what happens happens. And while there is no one to blame, except perhaps Lucy's grandmother,  there is certainly enough blame to go around. Five months later, on Christmas Eve, accompanied by a blizzard that traps everyone in Lucy's mother's house, the wedding bell blues ring out a final conclusion to the mess that this comedy is centered on. And it is a comedy. A funny one.

It is the Living Room Theater's pleasure to present this three scene (two act) play in the carriage house on the property of the Park-McCullough Mansion in North Bennington and a finer site couldn't exist for this production. Rather than changing the set this company moves its audience from location to location. It feels appropriate to move for we are in three very different places in town from the wedding room in a church to a darkroom studio to Mom's house. Each seat gives you a different perspective on the action which adds to the pleasures to be found "on stage." Also, when you start with a frantic dream sequence (see the photo here) and end with a stark reality, it's nice to get up, move around and relocate. There's something safer about it all.

Julia Valen plays the bride, Lucy, youngest daughter of a woman whose husband has died. The bride is a bundle of nerves, living through a nightmare that doesn't seem to want to end although it long ago has ended. In a re-rendered wedding gown her mother had worn, she is marrying a man who clearly loves her, loves her to the point of outrageous jealousy. She should be very happy, but like Liza Elliott in "Lady in the Dark" there are too many obstacles to happiness and the wedding nightmare that haunts her begins to dominate the reality she is living through. Her two older sisters are vying for dominance, as usual; her mother and her grandmother are arguing and making moments of Heaven into minutes from Hell. Her ex-boyfriend is hanging around which enrages the groom, his brother. By the time the Priest arrives (he's been called away to give last rites to a dying parishioner) there is nothing hanging together except grandma's excruciating and painful pride of place and position of pleasure. Valen is wonderful expressing the torture endured in the situation. Her Lucy is sweet, pretty, intelligent and unable to control her passions. She is the ultimate generational expression of her heritage and her grandmother (Gaga)'s delectation in upsetting apple-carts. It's a wonderful layered portrait of a young woman whose convictions are scattered.

Gaga is a passionate Italian immigrant whose American life has been devoted to better memories and the outrageous love of torturing her daughter and her grandchildren. She takes absolute gratification from maliciously inflicting disorientation in her relatives. 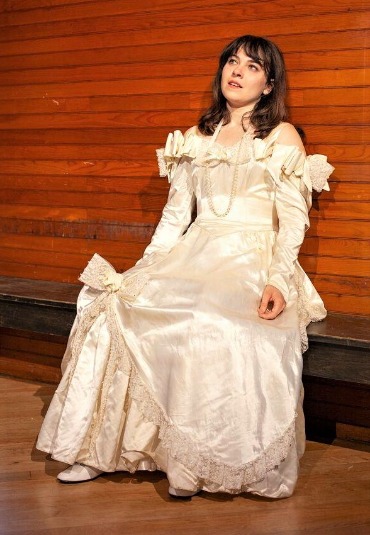 Will Gallagher as Eliot, Colleen O'Connor as Doreen;

Doreen, Lucy's married sister, is played by Colleen O'Connor. She is a woman discontent with her life for she has not been able to bear children. An uncontrollable flirt, she has eyes for every man who comes along and, though we cannot see it, we can believe she is flirting with the Priest off-stage. She is that kind of girl. O'Connor is a hilarious Doreen. In the Christmas Eve scene, she takes over the action to perform her intended club act song, but she never has a chance to finish the show because fate intervenes at just the right moment.

Eliot, played by Will Gallagher in a straightforward romantic manner, is Cal's brother.  Gallagher brings a wonderful and simple humanity to the role and his honest exuberance affect everyone including Karen Trott as Peggy, the mother of the three girls. Trott is very simply a winner in this role. She is almost always clear-headed and self-contained which is a definite change from the rest of the women in the play. She is also a wonderful example to Cal, the frustrated groom, played by Michael Broadhurst in a most amusing way. His performance, while his character is almost sane, is that of a perfect cynic and psychotic. It is lovely work in a very funny role.

Gaga is played without vocal tricks by Kirk Jackson who makes this dotty grandmother into the star of the show. This would be Gaga's personal choice so it is fitting that Jackson makes it happen. In a wheelchair, awkwardly balanced and contorted, for most of the play, his very old Italian woman has more than enough passion for the rest of the company combined. He is never better than when he screws up other people's intentions with a simple word or two. He is also portraying the funniest person in the play, the one-woman-gang and gang-leader without followers who can command attention and obedience without even half-trying. Zinn has composed a wonderful character here and Jackson plays her to a tee.

The lighting and sound by Chase McCloud were perfect for the play and the well-chosen clothing identified the characters perfectly.

Zinn has an eye for movement and for pictures. Her direction brings things forward that another director might have missed. She has crafted an excellent comedy, one that escapes the now traditional Sit-Com label. Instead she has produced from her mind a funny play about people who don't really merge until they suddenly do. Lucy's big sister Merle is played with a broad mixture of gusto and sensitivity by Sara Canter who acts a sobering sister and whose final scene is just wonderful and very memorable.

I recommend this play highly to anyone who can get to Vermont this weekend to see it. It's worth the time and effort. 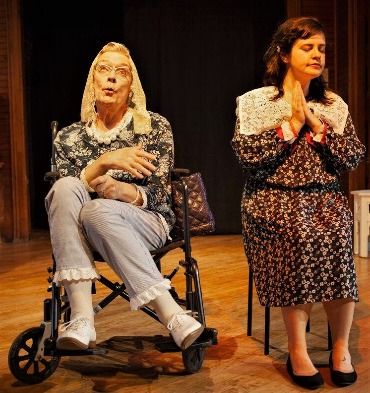 Lucy's Wedding plays through July 28 at the Historic Park-McCullough Mansion, 1 Park Street in North Bennington, Vermont. For information and tickets go to www.lrtvt.org/contact/ .