“The past is the present, isn't it? It's the future, too. We all try to lie out of that but life won't let us.”

When, approaching the end of his life, Eugene O'Neill wrote his final play, "Long Day's Journey Into Night," he believed to be basically  unproducible. This was chiefly because it was the most personal play he had ever written concerning  his family and his personal life before he became the playwright he was. He saw it as a release from the tensions that had informed his existence. while at the same time he was able, emotionally, to alter that image presented in his earlier work, "Ah, Wilderness," a light comedy about the family in their summer home, which is the setting of this last play also. Set in 1912, two years before his first plays were produced, Edmund (based on the author; in the play a dead brother named Eugene is talked about) is suffering from a bad cough and too much drinking, after a brief "career" at sea. His older brother, Jamie, suffers also from too much drinking and the constant harangues from his father James Tyrone - a famous actor (based on O'Neill's own father famous for his portrayal of the Count of Monte Christo) and the over-bearing concerns of his mother, Mary. As an auto-biographical play we might assume that the play is about himself, and so about Edmund, but that is not the case. The play is about Mary, Eugene O'Neill's mother, Mary Ellen Galligan. Addicted to morphine and other drugs she is a highly unstable woman whose emotions drag her through a bipolar existence. Writing this play about her in 1941 it dragged O'Neill through a personal hell he had professionally avoided for most of his life. When he died in 1953 the play was still unknown and presumably lost forever until his widow, Carlotta Monterey pulleld it out and allowed it to be produced. The rest is Theatrical History.

Seven people at Bridge Street Theatre have done a remarkable thing with O'Neill's play. Making a few minor cuts in the three and a half hour long work, they have given us what O'Neill intended and proved him almost better poet than a playwright. The text sings its mourning truths. It gives the emotional impact of that sad reality about the past being the present and the future, the realization of that reality: nothing changes or ever will change about this family's basic situation.  Father will never understand his sons who will never be satisfied with their father's ways and decisions and all of them will always be under the influence of their mother's addictive habits. There is a trap-door in their homelife that will always affect their ongoing existence. We can find this in many of O'Neill's greatest plays: "A Moon for the Misbegotten," for example which tells his brother's sad story, for example; or "Strange Interlude" which documents a family's inherited madness; or "Desire Under the Elms" which expounds on a mother's emotional lust for her son. None of them come close to this play, however, for emotional honesty. Director John Sowle has graced his company of actors with the physical comforts of a family that cannot avoid one another in spite of their feeling; their need for compatibility becomes too obvious. 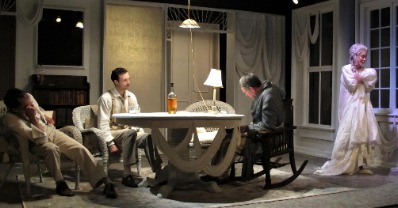 Steven Patterson embodies James Tyrone in such a way as to show us every emotional shift in his character's being. His pride in his sons and his shame at their inadequacies, as he sees it, are equally clear. Both his love for his wife and his hatred for her weakness are clear. He plays the man's inability to truly sympathize with any of their failures rules his actions and his reactions, He is the first actor I've ever seen in this role play the man wihout any actory  vocal shocks. There is honesty throughout his performance here.

Roxanne Fay as Mary is both fragile and forceful. She is not a mad-woman as I have seen her played before. She keeps Mary totally rational, a woman who knows what her mistakes are and why she makes them. She manages to show pride while going down into herself, searching for both answers and relief.  Her very occasional flares of emotion outside of her devotion to the three men in her life are exciting, brief as they are. Fay has done nice work in the past with this company, but in this play she delivers a performance that will not be forgotten. She and Sowle have created an antidote to the Katherine Hepburn portrayal and it is  one that future actresses undertaking this devastating portrait should profit from. 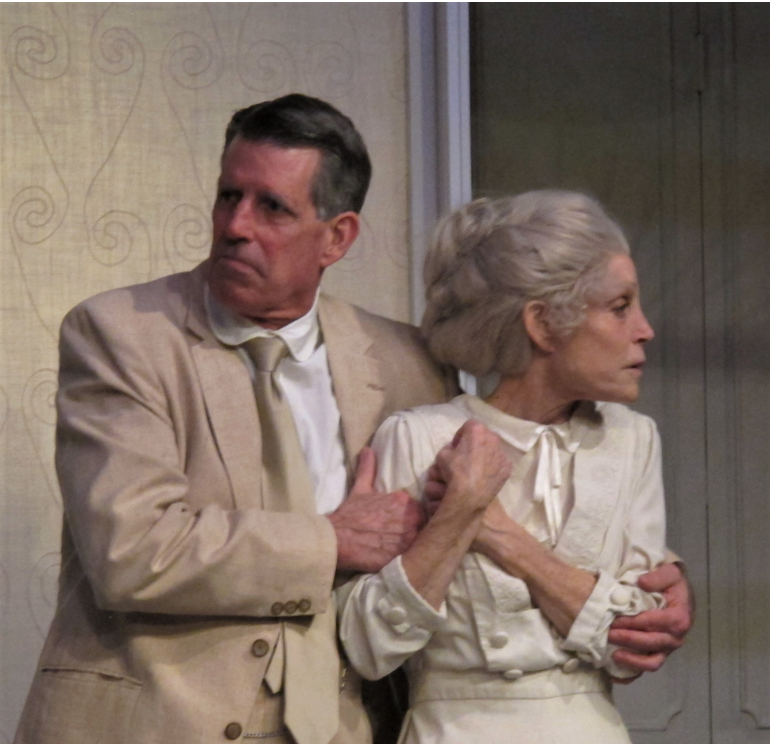 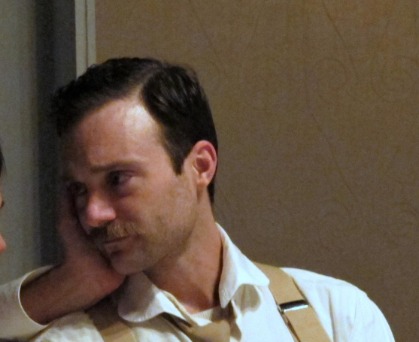 The two Christophers deliver nicely in their difficult roles. Mullen's Jamie has a disturbing normality: hostilely loving, liquored-up rationality. Onken's portrayal of illness is unassuming yet moving as he adjusts to truth suspected and anticipated. His scenes with Jamie are delicious, his scenes with his father are painful but practical. Just off the center of the play which hovers over Mary, he almost begs for our attention which he rarely loses. It is an excellent performance. As Cathleen, the maid, Taylor 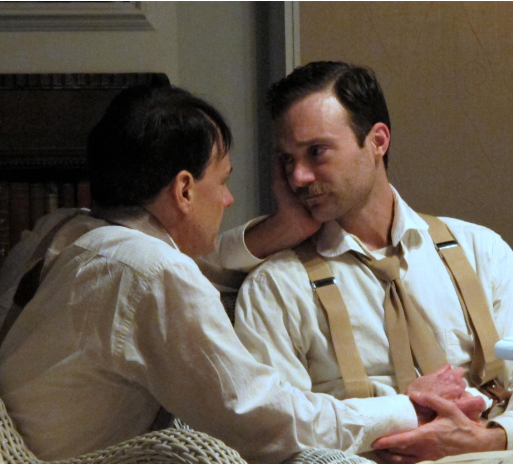 Long Day's Journey Into Night plays at Bridge Street Theatre, 45 Bridge Street, Catskill, NY, through November 21. For information and tickets go to their website at www.bridgestreettheatre.org