The Light, by Loy A. Webb. Directed by Jean-Remy Monnay; Reviewed by J. Peter Bergmn

This play is set in an educated professional woman's elegantly decorated apartment. It is not where her boyfriend lives, but we get the distinct impression that his home is not like hers. He is a fireman; she is an educator. Never-the-less, they are good communicators and clearly have much in common. They are comfortable together in her environment. That is until this particular night. It is the second anniversary of their relationship, and each has a surprise to share. Genesis has brought her man a small surprise; Rashad has a much bigger one planned. Both are mistimed and their reactions are what the play is about. It's the turning on of the light of knowledge that makes Loy A. Webb's play, "The Light" so special. On what should be the happiest night of their lives turns into one of the most difficult as truths and realities are exposed and both halves of the couple find themselves caught in the glare of the light of truth. 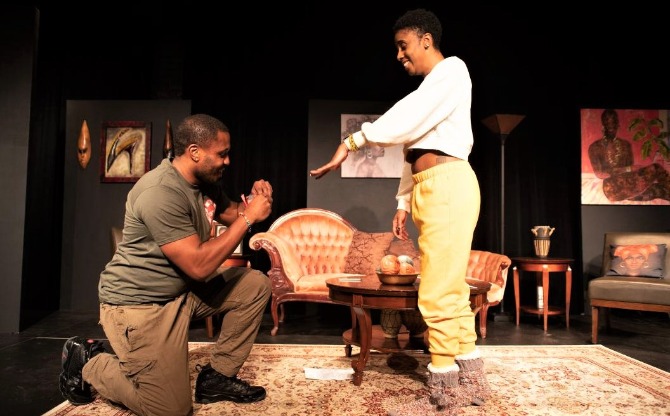 Genesis, in her anger at her lover's truth-telling, tells him a whopper of a lie which when made right only makes things worse. Rashad, in his honesty plays into her fantasies about men and cruelty and fecklessness. The marriage proposal (see the photo) brings them to a new place for honesty. This is a very provocative play and director Jean-Remy Monnay has two sensitive actors on whom to work through the rapidly changing dynamics displayed here. Iniabasi Nelson plays Rashad with a hint of awkwardness, showing us how a confident man can be cowed by a woman's emotions; it is fun and yet powerful watching him struggle with the love of his life who becomes convinced that she must dominate a difficult break in their involvement. Bianca Stinney is overpowering with her confident stage presence as a woman who knows who she is, what she needs and what she wants and what the differences are. between them. If the road to romance is paved with angry cobblestones that is the road these two have to take to complete their journey..

Webb's choices are marvels, every one of them. Genesis reads a love letter Rashad wrote to he the morning after their first date. Rashad is a big fan of the man who destroyed Genesis's fatith in a - and any - man. The writing is crisp and clear and sometimes aggravating as well. Director Monnay lets moments like these play out naturally and realistically and the imagination in the play leads the actors to the most ordinary and practical answers. It all works for all four of them. 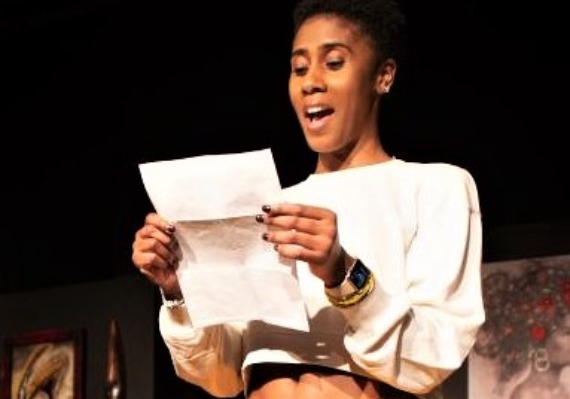 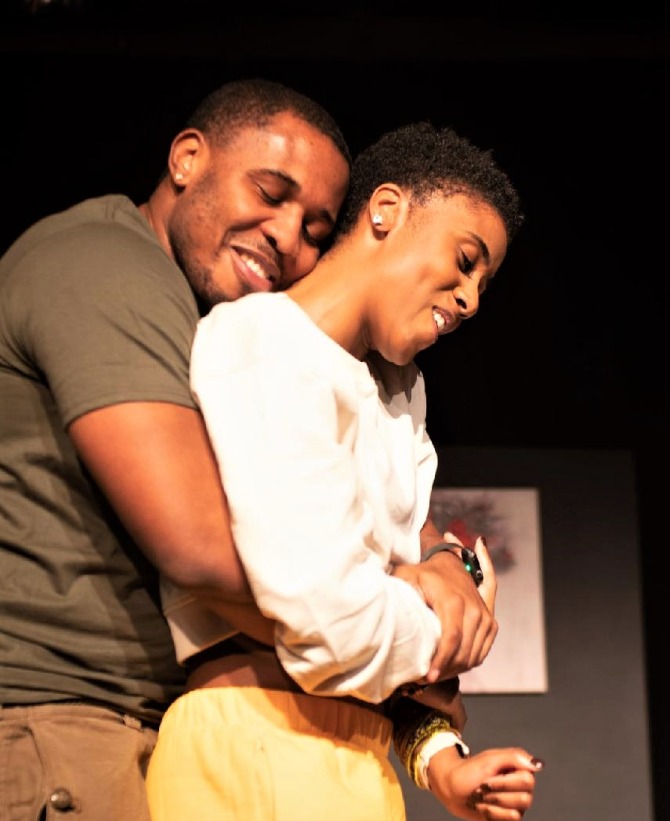 This is a neat play with a shock or a surprise every minute or two. The designers, Nic Nealon (lights) and Barbara Neu-Berti (costumes). have played their technical roles perfectly. "Love is always lovely in the end," Mrs. Tottendale sings in the show "The Drowsy Chaperone," and if ever two people deserved that sort of happy ending it is Genesis and Rashad.

However, telling lies for self-protection does matter negatively even when that error follows a large diamond on a ring that strikes a perfect note. Music plays a major role in the play, but it is more the theory of musicians' rights rather than the tunes themselves that make a difference in these two people's lives. To say more on this subject would kill the play's surprises so I'll let go of the plot and just tell you that this short play - just over an hour - may exhaust you as you try to take - and keep - sides. One thing I can say with complete assurance is this: You want these people to make it, to live happily ever after even if they never completely agree on much of anything. They do seem so right for one another.

The Light plays in the Lauren and Harold Iselin Studio at Capital Repertory Theatre (theREP) at 251 N. Pearl Street in Albany NY, through March 13. Tickets are $20 general, and $15 students and seniors. To purchase tickets, call the box office at 518-346-62-4 or visit BTTUNY’s website: https://www.blacktheatretroupeupstateny.org/season/thelight