Night and Day, Love Lost and Found Through the Eyes of Cole Porter

Conceived and written by Robert Cacioppo with Arthur D’Alessio.

Two young married couples spend a weekend together in a Berkshire mansion. We meet them on their first night and see them through to the following afternoon. A lot takes place. Donald, newly married to the lovely Linda, finds himself attracted to blonde Tilly and kisses her just as his bride enters the art deco lounge. In revenge she takes up with Tilly's husband Charles. it's the sophisticated 1930s when love and lust traditionally have their way. You can guess what happens. That's the story of "Night and Day:  Love Lost and Found in the Eyes of Cole Porter" as the whole thing plays to the songs, with sophisticated lyrics, of the quintessential songwriter of the time. Thirty-nine songs later every problem is solved and the foursome go on as they should, romances resolved, friendships restored and a happy future assured for everyone except the anticipated Miss Otis, who regrets she cannot join them all for lunch today. The authors, Mssrs. Cacoppio and D'Alessio have given their characters enough foresight to allow them, in 1930, to sing songs Porter wrote in the 1940s ad 1950s. But it all goes by so easily that ultimately you just don't mind that much at all.

The show opens with the Butler's Ballet as he, played by Allen Phelps, prepares the lounge for occupation by the weekend guests. Things move along swimmingly as people arrive and are introduced to us with appropriate Porter songs and then suddenly Linda (Natalie Brouwer) and Donald (Matt Michael) launch into a newlywed duet, "True Love" from the 1956 film musical 'High Society" and both the plot and the distractions start.

But, as I said, after a while it really doesn't matter. With very little dialogue and more than a few verbal jabs and interjections, it is the songs that matter, not their sources. It is just what they convey about the characters and not when they were written. Porter's style is just Porter and he and his lyrics have a timelessness that transcends period. His universal sentiments are the thing, not Ethel Merman's sound or Mary Martin's tones or Grace Kelly's ineptitude with a song. It is the songs, and this show is all about the songs and not who sang them. 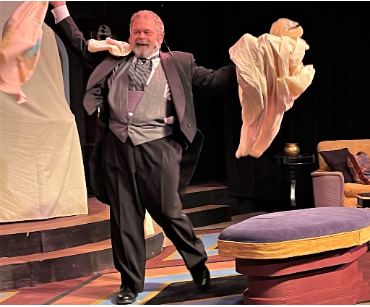 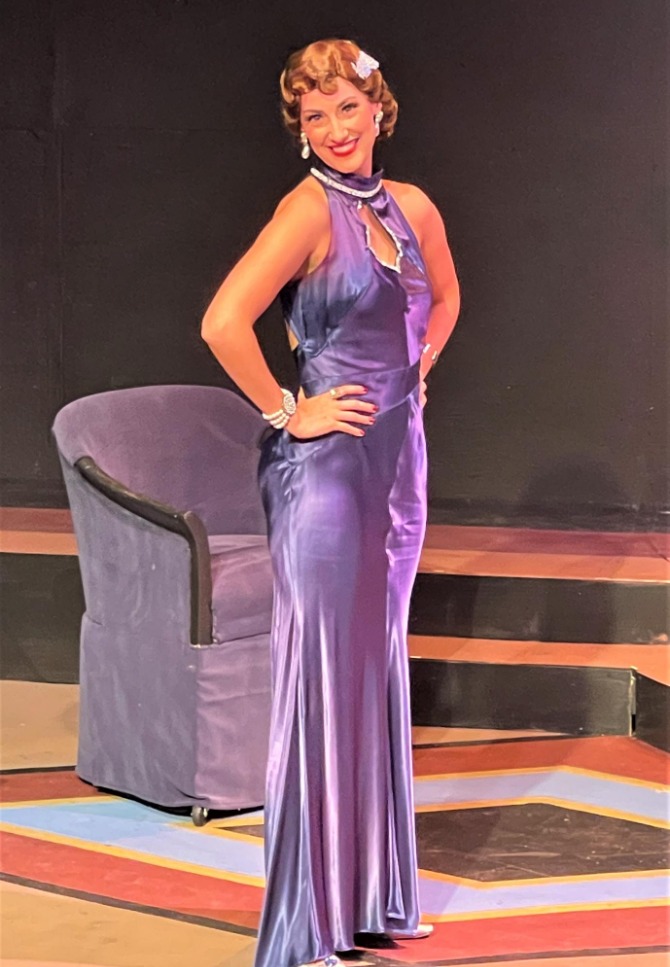 The second couple, Tilly and Charles, are played by Lindsay Braverman and Jarod Bakum. This is one of the most perfectly balanced quartets I've seen in a while;. each one sings and dances well and their vocal harmonies are extremely engaging. They all exhibit stage personalities that engage our imagination, wear clothes beautifully and are adept at comic asides, those looks designed for a laugh. What none of them seemed to get were the subtlties of "double entendre" that Porter built into the lyrics of some of his finest songs such as "But In the Morning, No." When you go, listen carefully and try to get the most out of them. The people are all pretty and the show is finely designed with a fascinating set by Sam Slack, pretty costumes by Kara Demler with an assist by the very talented Joanne Maurer) and lighting by Joseph Sicotte (none of which worked perfectly on opening night, but they will).

One of  the show's finest elements is the musical direction and playing of Victoria Casella who took a much deserved bow with the company. Director Arthur D'Alessio also choreographed his cast around tight spaces and made the show as fluid a presentation as possible which also made it as interesting as it could be. In a controlled space, with dancing furniture, he kept the show lively and occasionally thrilling as no one fell or got hurt along the way.

This first musical in the Theater Barn season provides a lot of joy and distraction as its nearly all-sung script takes us on a Jeanette MacDonald/Maurice Chevalier sprint through romance.  The combination of Cole Porter's pretty music and witty lines with handsome couples in stunning clothes is really not to be missed in these gloomy days of post-pandemic resurgence. See it if you can.