I don't know what there is about tap-dancing nuns, but they give me so much joy. Since its opening in late 1985, I have seen this show about twenty-five times - which for Nunsense isn't a lot - there are fans who see it all the time, wherever it plays. My friend Semina DeLaurentis - who originated the role of Sister Mary Amnesia - had previously introduced a silly, roller-skating, tap-dancing, forgetful nun in her nightclub act. She certainly had a lot to do with my love for this character and this show. It's original stand of just over ten years replaced my other favorite off-Broadway show, "The Threepenny Opera" as the second longest running show in that arena (the longest being "The Fantasticks"). There is just something about it - it never gets old and sometimes it gets even better. The production at the Sharon Playhouse is one of those latter examples of how talent and insight can improve on perfection. 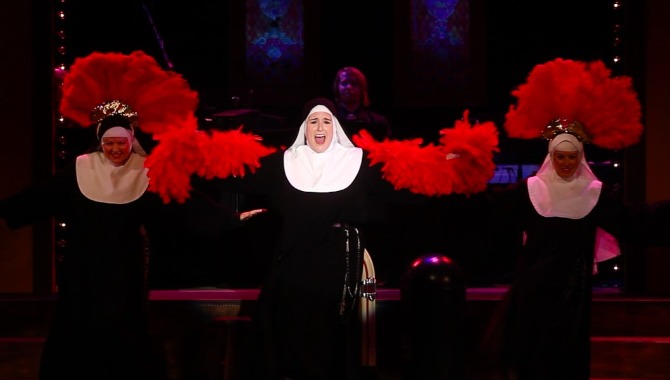 I've known nuns who love the theater, love to rush up an A-ladder with a wrench to fix a light focus, and in full Habit at that. They love to sing and even shake their booty. So perhaps this show with nuns at center stage should hold no surprises for me. The stretch of musical numbers, going from downright blues to raucous burlesque seems just right.

You read about Ziegfeld's comic star Fanny Brice playing the dying swan, well this show gives you the dying nun ballet en point, and it couldn't be more poignant and hilarious than Brice's version. And "Nunsense" has as its plot point-center, Sister Mary Amnesia, who just showed up one day without her memory but in the right costume.

The background story about four dead nuns in the freezer feels so right that when it becomes more than merely a rationale for the five sisters to put on a show, but a crucial turning point for the play you just know there's a God somewhere typing the script, penning the tunes and madly scribbling the hysterical lyrics. That God, or by gad, is Dan Goggin who may just have been inspired by my friend Semina on her roller skates in a tiny cabaret.

First comes Amnesia. She is fragile, gentle, sweetly sad and hysterically funny. She seems to just float into the room where the show is going on, not really belonging, and yet so perfectly right in the space. She is played, in this production, by Jeanne Tinker who is physically full-bodied though without a fully functional mind. Tinker is sweetly amusing yet always engaging, quietly stealing our attention away from whatever else is happening. She is a presence, a heavenly engagement from another world. When her memory is restored - possibly - in the second act and her dream of being a country-music star takes center stage, Tinker truly lights up the production with her full-throated star turn.

Bambi Jones, Sister Mary Hubert, also has some of the best musical moments in this production. Hubert, uncomfortable with the name, is second-in-command at the convent. She cleans up after the "Sister" Superior (who blunders through being top-dog here), and belts out both the first act finale "Tackle That Temptation With a Time-Step"  and the second act finale, "Holier Than Thou," as well. Jones is very funny with her wiseguy facial looks and her semi-serious tone of voice when she comments on some mishap or other. She adds much to the overall style of the play. 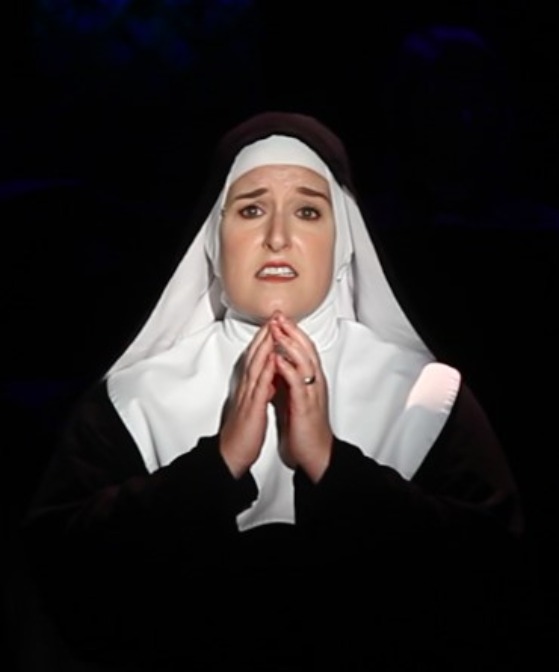 Sister Mary Leo comes next. Played by the very talented Krista Kurtzberg, Leo is the eager beaver, dying to be liked, liking to be loved and always over-eager. She has her Cinderella moments and her classical dance sequence (assisted by Sister Robert Anne) and really does just about everything you can think of in a musical about nuns, including singing in Latin. There are funnier Soubrette roles in other shows, but this one has the addition of genuine innocence to guide it and Kurtzberg plays that sensibility beautifully.

The fourth nun, Sister Robert Anne, has been given the role of general understudy and she resents it. A typical Brooklyn girl, street tough and ready to rumble, it is clear that her time with the Little Sisters of Hoboken (NJ) is not a perfect fit. Robert Anne is played by Kimberly Chesser to perfection. She does impressions that are hilarious. She sings with an almost Ethel Merman tone, but she can be sweet and pious and always much prettier than any nun deserves to be.  When this understudy has to go on due to a situation too curious to go into here, she takes the stage like the pro she is and wins not just much well-deserved applause, but our hearts as well. This is a grand performance, one that will be hard to beat and - remember - I've seen a lot of performances of this show. Chesser is teriffic!

So, four sisters down, and one to go. The five nuns of "Nunsense" are completed by their Superior, Sister Mary Regina played in this production by the incredible Mary Stout. Stout is, undeniably, the funniest, raunchiest, wildest, freakiest nun on this or any other stage. Whether she is talking about the convent cook, "Sister Julia, Child of God" and her cookbook "Baking with the BVM (Blessed Virgin Mary) or dominating the spotlight with her raunchy Sophie Tucker styled solo, Stout is a joy to behold, her broad smile covering a world of thoughts and emotions. She is the inevitable star of the show, befitting her station of the cross. 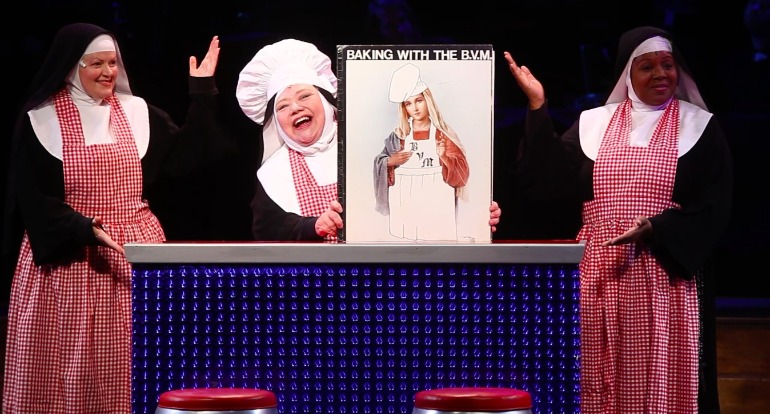 Mary Stout sings "Turn Up the Spotlight"; Eric Thomas Johnson at the piano;

Teri Gibson has put the nuns on their feet (and there are at least three jokes about that in the play) and kept them mobile for the full two hours of the show. Her dance routines are just what you would expect, only funnier, and however she worked with her actresses, they emerge less like penguins than as fully developed characters, each with her own set of foibles, quibbles and quirks.

The lavish set is designed by Barry Axtell with excellent lighting by Jaime Roderick. Karen Roberts is responsible for the costumes and assorted add-ons which make the musical numbers meaningful. Graham Stone's sound design is bright and brassy, which makes this "Nunsense" the loudest one I've ever attended. I am only sorry I didn't see this production sooner as I might have gone back to see it a second time. Thank the Lord this is one of the best productions I've seen since the original - and it's just as funny as ever. Amen.

Nunsense continues at the Sharon Playhouse through September 15. For information and tickets call the box office at 860-364-7469, ext. 100.