Rapunzel, The Tale of a Quaran-Teen by Cathy Lee-Visscher.

"Kids! You can live with them, but you can't burn them."

This is a story of two mothers in a battle over radish greens. When the basically barren Baker's Wife becomes pregnant her food cravings get out of hand forcing her husband to thievery from a neighbor's garden. When she catches him, she is revealed as a witch who threatens them with a heavy curse as punishment for his theft. They reluctantly arrive at a deal. She will spare the Baker's wife, but claim her first-born as her own. This turns out to be their daughter Rapunzel. But the Baker's Wife has given birth to twins which ultimately alters the familiar story as The Pantoloons tell it at The Ghent Playhouse in Ghent, New York for their 21st season.

In Joanne Maurer's funniest costumes ever, the issues of babydom, childhood, and the teen years dominate this show with just enough politics thrown in to keep it on the traditional holiday Panto track. Maurer herself appears as the Court Physician Dr. Bony Ouchy who interrupts the show with frequent announcements about the plague ravaging their town. She is almost as amusing as her costumes. Mark Wilson is fun as the Baker, bemused, in love and in need of some rest from the hard-hearted wife who tortures him with her very vegetarian desires.

Monk Schane-Lydon is hilarious as the Baker's Wife. From his movements in his drag costume to his verbal attacks on her husband there is something delicious in his work. He's been very good in earlier pantos he is truly in his stride here. His actual wife, Catherine Schane-Lydon plays the narrator/bartender behind a cleverly designed piano-shield - one section of Sam Reilly's wonderful stage set. There are five playing areas that Reilly manipulates for this show: the Baker's kitchen, Rapunzel's tower, the "bar," the woods and Dr. Ouchy's podium (a joke itself), all of this on the playhouse's small stage. It is a comedic miracle. 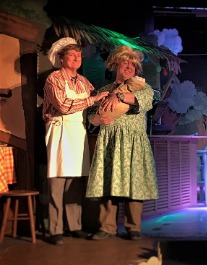 Mark Wilson as the Baker and Monk Schane-Lydon as his wife; Photo: Sam Reilly (rehearsal shot) 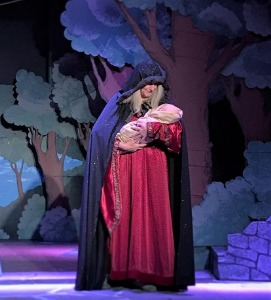 Sam Reilly plays the title character with his characteristic sensuality and grace. This relative "innocent" flirts outrageously with a passing stranger, Leo, played by Nellie Rustick Meier, then with Repugna, his own twin brother, beautifully played by Emily Spateholts and finally, for a moment, with her own father. Reilly is brilliant in this role.

Old Witch Hazel is played by Cathy Lee-Visscher. I don't believe she has ever been better that she is here. If the theater could have flown her, she might have topped herself, but just inhabiting Reilly's set gave her an exotic edge, partly due to Joe Sicotte's great lighting design work. This company of players play well with one another and the resultant show plays well with the audience. To say much more would only give away the jokes and I simply won't do that. Each audience needs to discover them personally. As a follow-up to that great comic holiday, Thanksgiving, and a preamble to the next one, Christmas, it is its own special bit of Chanukah gelt. It's really a not-to-be-missed example of what the pandemic took away and what theater is restoring to us all. .

Rapunzel, The Tale of a Quaran-Teen can be seen through December 12 at the Ghent Playhouse, 6 Town Hall Place, Ghent, NY. For information and tickets go to their website at www.GHENTPLAYHOUSE.ORG. ﻿