In 1884 Hans Christian Anderson wrote his novella "The Snow Queen," consisting of seven stories about two children, Gerda and Kai. The story later inspired other authors to create their special tales in a similar format. Although the Disney company has had much success with their film "Frozen" which shares elements of the Anderson fairy tale, it has never actually adapted this one; others including "The Ugly Duckling," "The Little Match Girl," "The Emperor's New Clothes," and "The Princess and The Pea" have been used for films and shows, however. The richness of Anderson's language has been used by adaptor Barbara Wiechmann in this lovely version on stage at the Ancram Opera House. With music by Lisa Dove, "The Snow Queen" is almost more a cantata that has been staged rather than a musical play. It's tone is more classical music than Stephen Schwartz musical. That setting brings an almost ethereal quality to the stage presentation and serves to transport the audience to a place it cannot compare to any other place they've been. It works remarkably well and the theater in upstate New York feels almost like a 19th century carriage flying across a snowy landscape while a story of the land that surrounds us moves, like paper in a windstorm, in comfortable fits and starts. Nothing jars us or changes the mood. 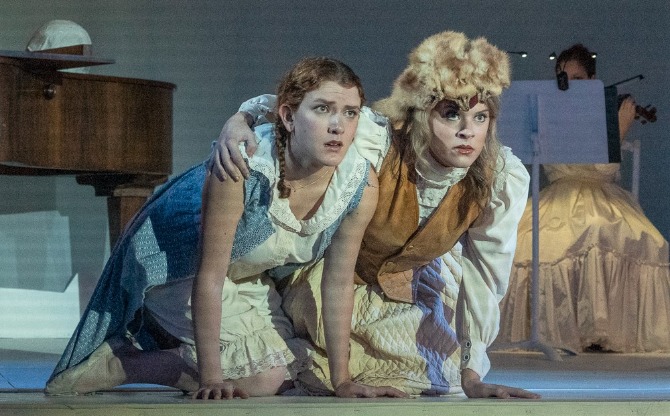 This story deals with a dauntless girl named Gerda whose best, and only, friend Kai has been transformed by two shards of the Devil's mirror that are stuck in his heart and his eye into a cold, unfeeling person who attracts the Snow Queen who has kidnapped him for her very own and taken him to her castle near the North Pole. Barefoot and in only a basic garment, Gerda pursues the Queen determined to save her friend. En route she encounters many odd people, most of whom ultimately help her achieve her goal. Katie Birenboim plays Gerda and Cheyenne See plays the Snow Queen. Both women have beautiful voices and it is a treat, a definite treat, to sit and listen to them sing this unique score.

In fact all of the women playes in this show have exceptional voices. Lauren Bell's voice is strong and sustainable; Sandra Boynton's is full-throated; Sandy York's voice blends with the others and enriches the score. However it is Birenboim's solid mid-soprano that carries the bulk of the show. She also acts the finest childhood range as she brings Gerda into womanhood without ever changing costume, hair or makeup. In the nearly ninety minute show Gerda moves out of childhood as she experiences the world of the north countries in her solid threat and adventure filled journey. She makes an interesting character into an unforgettable emerging woman.

David Perez-Ribada as Bac, the reindeer; Photo: B. Docktor

Along the way, in her Scandinavian trek, Gerda is aided by some remarkable characters including an old woman who tends her lush garden with the forgetfulness of children, an educated crow, charmingly played by Brian Demar Jones, who only wants his erudition celebrated by humanity before he dies, a gang of robbers, one of whom is a girl about Gerda's age who celebrates her narcissism through enslaving birds and a wonderful reindeer who was born in the shadow of the Snow Queen's castle. Played by David Perez-Ribada, this reindeer - wearing one of Denise R. Massman's fanciful costumes - touches our hearts with his energy-driven realization of his own fragility through his never before acknowledged years. This is one example of how Anderson and his adaptor pull together the remarkable union of human traits within other members of the animal kingdom. 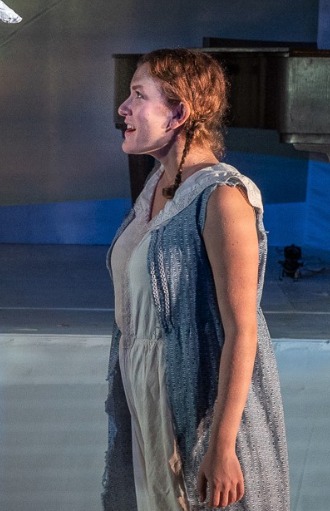 Two other characters need to be included here as they provide much of the context: a man, a writer, and a boy who is his younger self. Haunted by dreams from his youth the man wants to tell this story, emerging from his youthful dreams, to his child's personality. It is an awkward concept but it works for this show. The boy is sweetly played by Shawn Adiletta and his older counterpart is interpreted by James Occhino. They pair perfectly and the man, in particular, is integral to the piece. He is Anderson, the author, and without him to serve as a guide into the strange story he is telling the audience could easily get lost. What is fascinating though is how to finish the tale, his and the boy's roles become reversed, as though only the young mind could complete, satisfactorily, the tale of Snow Queen, her victim and his saviour. Occhino is so honest he becomes real and the boy is so fanciful he can only be a memory of a creative child growing up. Lovely work in a show that gives us another vision of the true meaning of love and an understanding of how one person affects another person. 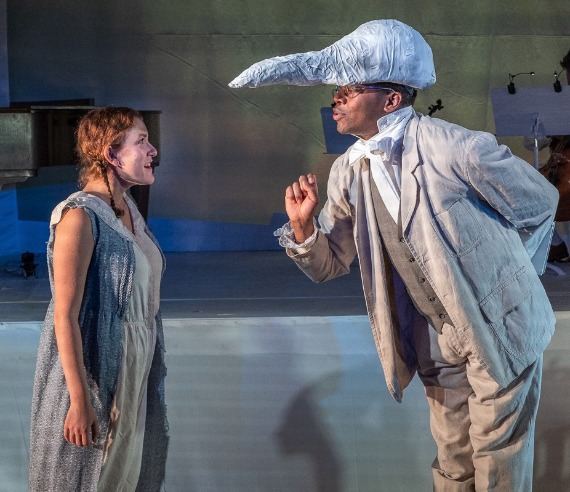 The success of this aspect of the show is due to a combination of artistic choices by both director Jeffrey Mousseau and costume designer Denise R.Massman. They have dressed almost everyone in white with a variation or two and the animals have the addition of a headpiece that defines each character. There are three musicians on stage who provide lyrical accompaniment, strident assistance and even sound effects on their piano, violin, cello arrangements: Elizabeth Gerbi at the piano, Louis Rizzo on the cello and Emma Piazza playing the violin. The music's simplicity reflects the story and the interpretation.

The story, a mixture of fantasy and fear, may not be appropriate for very young children and its music may not work for everyone, but the mixture of fairy-tale cruelty and torture should be the sort of challenge young people can endure. Sarah Edkins scenic design is startlingly monotone and Ayumu "Poe" Saegusa lighting may be a bit confusing. Alexander Sovronsky's sound design work aids and abets the presentation along with some visual effects.

Wiechmann, the book author for this show has made some very interesting choices. Almost nothing from the story has been left out and yet there is a sense of a barren plain through which the barefoot girl must walk in the winter of her childhood. Anderson has given her a lot of leeway as his seven stories each present an episode in Gerda's journey of love that are definitive. Connected and yet specific every one of the stories shows us another aspect of pure love and its effect. This musical telling could become a Christmas tradition like Dickens' story has for so many theaters so I would suggest that Ancram Opera House store the production.

The Snow Queen has two more performances at the Ancram Opera House, 1330 Route 7, Ancram, NY. For information and tickets go to their website at www.ancramoperahouse.org or call them at (518) 329-0114.