It is rare when I see a show to review it that both of the lead players have been replaced by their standy/understudies. Rarer still is having experienced this I find that no one else could perform these roles as superbly as the fill-in standby personnel. This is what happened last night at Proctor's Theatre in Schenectad, NY when I went to the press opening of the First National Tour edition of "The Band's Visit," a remarkable show that I saw a few years ago on Broadway with Tony Shalhoub and Katrina Lenk.  An information projection begins the play; it reads:  "Once, not long ago, a group of musicians came to Israel from Egypt. You probably didn't hear about it. It wasn't very important."  The same words end the play spoken by Dina, a woman whose loneliness in the town of Beit Hatikvah just exemplifies what life in a reclaimed desert becomes without any culture to speak of. In the twelve or so hours that those lost musicians spend there (they should be in a city named Petah Tikva) they affect the lives and viewpoints of those who live there. Essentially this is the Seinfeld of musicals: the show is about nothing but it has an effect on everything and everyone who comes to see it. It challenges the stereotypes of those intimate with the Arab-Israeli conflicts; it alters the experience of love, the sense of despair, the meaning of music in all its notated communication. I called this show remarkable at the top of this paragraph. It is remarkable and I will make more explicit remarks below. 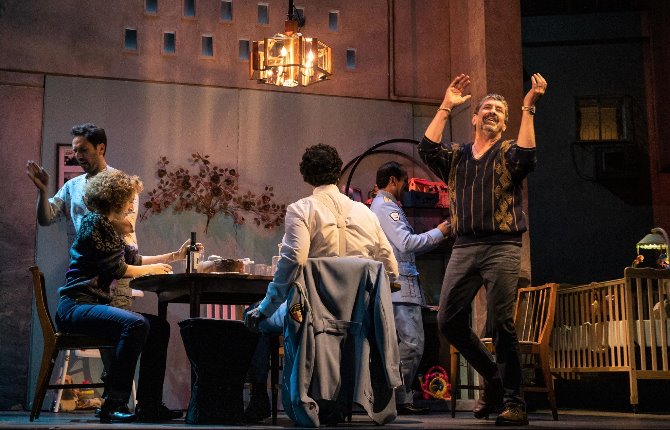 The show introduces us to a lot of people who live with their lot in life, who don't work to improve things and who don't seem to care. They grow despondent, find that attitude too tiring and just seemingly give up on their lives, their futures. For example Iris, played by Hannah Shankman (another superb standby it seems), lives with her husband and baby in a room that has no light in it, except the electric light; she lets her fears and sadness often grow into a state that forces her out of her home to find something bright somewhere, but she never can find anything. The love of her father, Avrum (played to perfection by David Studwell) and her husband Itzik (sensitively portrayed by Pomme Koch) cannot soothe her.

Sasson Gabay & Janet Dacal (not seen in this performance). Photo by Evan Zimmerman

For this performance the exceptional Bligh Voth played Dina and Loren Lester took the lead role of Tewfiq usually played by Sasson Gabay who originated the role in the 2007 Israeli film. Lester is wonderful, less stiff and formal than Shalhoub had been, but even so his transformation by a touch of love is a beautiful thing to watch.  He is also a much better singer giving his duet with Voth a truly romantic momentary aura.

Voth, herself, is an idealized version of the desert woman whose needs are visible on her skin and whose homey philosophy about life can stand a bit of digression on her night out with Tewfiq. Both characters seem to need a moment or two of personal confession: the Jewish woman and Egyptian policeman/musician. Inspired by different circumstances their differences provide evidence that they might be soulmates, but not necessariily ones able to share much or share for very long.

The play hinges on their ability to emit empathy and sympathy in large doses subtly rendered. Both of these actors manage this with aplomb. In that Jerry Seinfeld "nothingness" these two would make perfect neighbors. 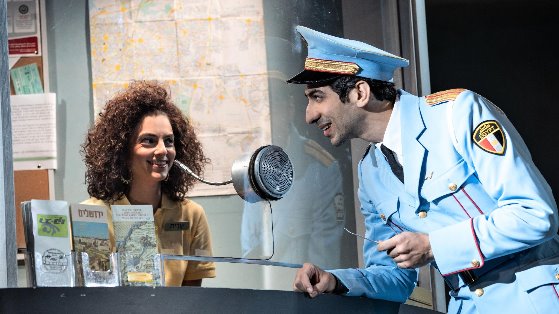 Joe Joseph as the sexually flirty Haled, who loves his trumpet with a 1950s jazz emphasis, is charming and funny. Mike Cefalo as Telephone Guy, content to wait by a public phone for a call from a girl he adores, is remotely sympathetic and charming. Jennifer Apple plays the silent, shy and lonely Anna with almost heartbreaking physicality except when she dances and skates. The other six band members all of whom act and play their sometimes remarkable instruments add both reality and interest to the show where nothing really happens. Their post-curtain-call performance is worth sticking around for, by the way. The concert this band has entered Israel to play is worth everything and it is hard to believe that the quality of their performance has not been enhanced by their late night experiences in the wrong town with the people you've just read about.

For a show about nothing important the outcome is most important indeed. Traditional enemies - dating back to the days of The Ten Commandments - there is great beauty in watching them all communicate so well.

The company of The Band's Visit North American Tour. Photo by Matthew Murphy

There doesn't seem to be anything cut from the original production: sets, lights, costumes are what I remember. Scott Pask's scenic design, Sarah Laux's costumes, Tyler Micoleau's lighting and Maya Ciarrochi's projections are very effective. Dialect coaches Zohar Tirosh-Polk abd Ronnie Malley have done expert work with the company. About one fifth of the dialogue is either in Arabic or Hebrew but you never need a translation. The songs by David Yazbek are lovely and maintain the thematic sense of the piece. David Cromer's direction is open, simple, moody and sometimes perfunctory which works for a play about nothing. Patrick McCollum's choreography is as chilly and correct as possible for a "blah-blah-blah" desert town. All together the disparate elements of the show - Egyptians playing beautiful tunes, Israelis focussing their attentions on the hard to obtain in a town where nothing grows, nothing happens and no one really cares enough to make a difference - meld into a cohesive unit where music has impact. 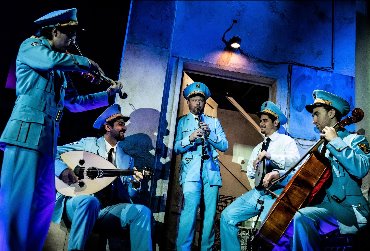 The Band's Visit plays through January 5 at Proctor's Theatre, 432 State Street, Schenectady, NY.  For information or tickets go to their website at Proctors.org or call the box office at 518-346-6204.