This is just an example of the level to which David Ives' humor can drop. Yes, it is clever, gets a laugh and in the context of his short play, "Enigma Variations," it is highly appropriate. In this piece a woman and her doppelganger seek medical advice from a doctor and his double. Point of view is everything and even mental illness, or mental awareness, can be contagious. Considering the play that precedes it is about the romantic life of a mayfly, this is pretty sophisticated stuff.. 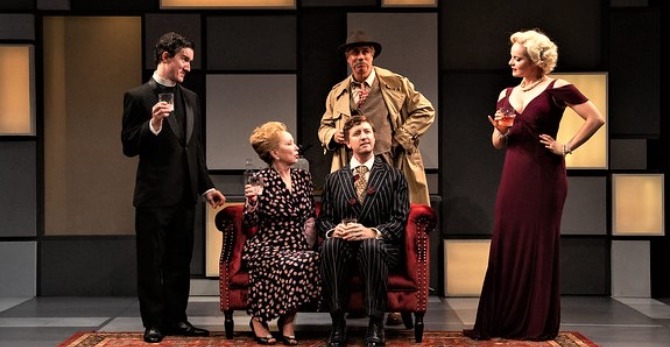 Ives is a very amusing author and the six short plays in this entertainment do indeed entertain. He brings a wonderful sense of humor to everything from romance to death in this group, spoofing the British-style murder mystery, the Twilight Zone, science fiction and just about every other style of play you can conjure. On Barrington Stage Company's second stage the wonderful collection of character actors assembled for this foray into absurdism keep the show moving along brilliantly with their costume and wig changes, a pointedly generous directorial overview, and their own characterizations. It is almost the answer to a prayer to have Debra Jo Rupp, Jeff McCarthy and Carson Elrod on the same stage at the same time. Not just popular favorites, they are a near perfect blend of acting ingredients, active ingredients really, who spark reactions that are guaranteed to create a volatile mixture of comedy and tragedy.

Add in Ruth Pferdehirt whose beauty and voice are choice, and Cary Donaldson whose sturdy manliness is almost a parody in itself and the final combination leads to the perfect interpreters of Ives' special brand of theatrically stereotyped humanity. 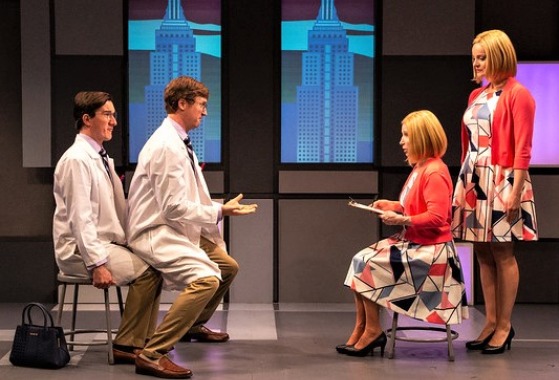 The six plays and the intermission last just under two hours and as cynical as I can be it was a literal laugh riot. I haven't had this much fun with silliness and absurdity in a long, long while. A very variable set designed by Brian Prather was as pliable as the five players. The remarkable costumes designed by Elivia Bovenzi provided just the right amount of their own humor. Matthew Richards' lighting design gave us just enough mood and place orientation to keep the plays and the transitions between each of them interesting. Eric Shimelonis' original music and sound design reflected David Ives' own rhythms. Special attention must be paid to the fabulous wigs designed by Mary Schilling-Martin; they could not have been improved upon.

Likewise, the cast is superb. Jeff McCarthy stretches from dominant female to intellectual TV host-scientist to British detective with ease. Ruth Pferdehirt moves from anxious psychotic to annoying waitress to British seductress without a problem. Cary Donaldson is a master of primordial discoverer, Spanish anarchist, and previously dead sadist and medical professional. All three leave indelible impressions in these and other roles as they display their acting abilities. 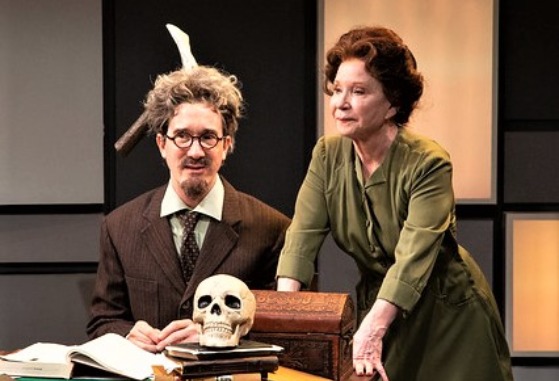 Debra Jo Rupp and Carson Elrod, two of my favorite actors, play equally opposite characters in the evening's entertainment. In "Variations on the Death of Trotsky" Elrod plays the assassinated political figure and Rupp is his wife/widow. They play the same scene over and over with alterations and the play just gets funnier and funnier as they move through Ives' wonderfully peculiar concept.

In "Life Signs" they play an awkwardly estranged mother and son who are brought to a new recognition of one another at the most awkward time in their lives. I recall an actual guffaw escaping my lips during this one. I do not guffaw often.

Director Tracy Brigden has done a remarkable job with the six plays and five actors aided by her designers. The comedy timing is an object lesson in precision and that is the combination of a director's eye and the actors' ears. In an awkward time, politically, and with so much remarkable drama being put on local stages, it is a tribute to this company that they can allow us a few hours in which to discover how enriching laughter can be.

Time Flies and Other Comedies plays on the St. Germain Stage at the Sydelle and Lee Blatt Center for the Arts, 36 Linden Street, Pittsfield MA through July 27. For information and tickets go to  www.barringtonstageco.org or call the box office at 413-236-8888.