The Two of Us Productions, Copake, NY

based on "I Am a Camera" by John Van Druten, based on stories by Christopher Isherwood;

"It was a swell affair, but now its over."

When Kander and Ebb and Joe Masteroff wrote "Cabaret" in the early 1960s it was still somewhat timely. Echoes of World War II still hung in the air and many adults who had fought in Germany and witnessed the almost carnal destruction of a culture still rang the bells. Hosts of people has no idea of wqhat pre-war Berlin was like and if they did it was due to Christopher Isherwood's writing and John Van Druten's play which starred Julie Harris as Sally Bowles; she repeated her role in the film version. Jill Haworth played that part in the first cast of the musical and she exemplified the role with her second-rate singing as the second-rate club singer with hopes of a movie career. In the years that preceded Isherwood's book a young Marlene Dietrich frequented  the Berlin clubs. cross-dressing and singing when she could. Much of that history has come into the show as presented by The Two of Us Productions in collaboration with The Roving Actors' Repertory Ensemble production of this musical at the Copake Grange Theater. In the '60s much of the historic imagery was cleaned up but the work still shocked its audiences. Now, in the twenty-first century a more realistic view can be explored which director Stephen Sanborn has taken advantage of in this new production. 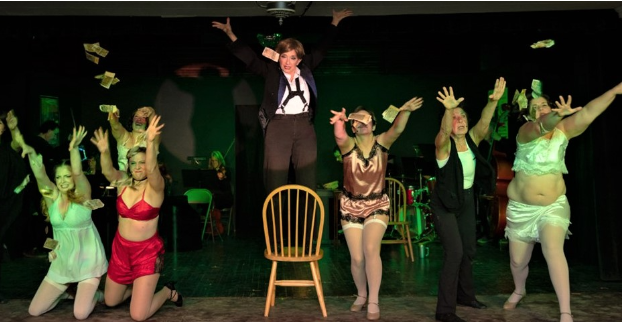 The two most prominent changes are dynamic ones: The Master of Ceremonies is now female - and probably Lesbian - and the leading man is now bi-sexual (a shift made in the film version in which Liza Minelli's Sally was clearly too talented to believe).Constance Lopez is delivering this revised character with assurance and finesse.  Her singing is excellent and her acting is convincing. The sexuality of her crop-haired boyish cut and her costumes reinforce her interpretation and though some of the original is gone the role works in this new way. Bravo to Lopez for taking this on.

The girls are racy in their underwear costumes but a bit less so with their movements which could be broader. They do present an image, however, of the racier side of Berlin and that worked well. Unlike the lyric in the opening song "Wilkommen" the 10-person band, conducted very well by Sanborn, is NOT beautiful. However they do play Kander's score to perfection. 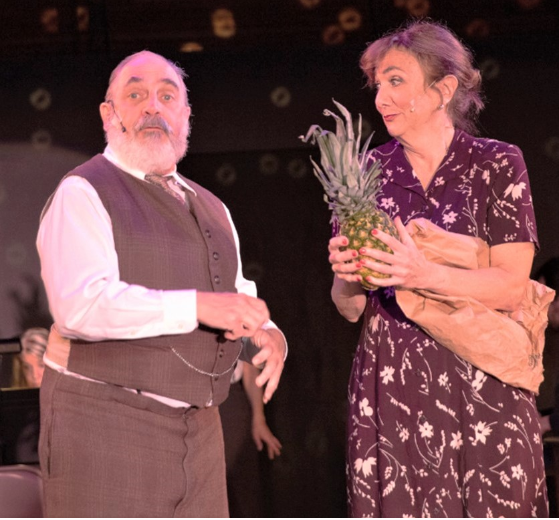 One more brilliant aspect of this production is the casting of Benita Zahn as Fraulein Schneider, the landlady, and Fred Sirois as the fruit-marketer Herr Schultz. Both actors bring experience and understanding to their roles and their acting adds resonance to their roles. They share two duets and Zahn has two solos which touch deeply into the heart. In what is traditionally in a musical the comic couple they are, instead, the humanity that is missing in the primary story. I would defy anyone who isn't moved by Zahn's "What Would You Do?" in Act Two. This is fine acting in song.  Sirois' final exit in that act is as touchingly human as anything I've seen this entire year. 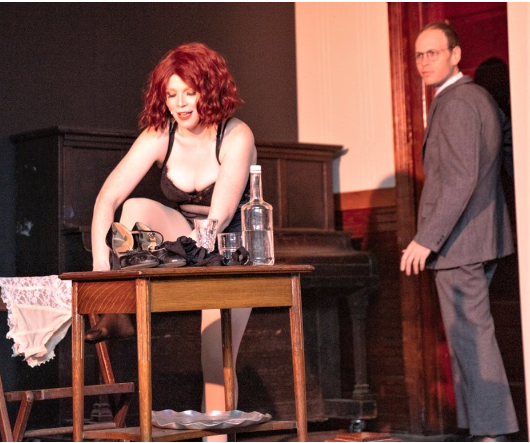 The primary romance between  club-singer Sally and American novelist Cliff is usually what carries the  line of the show. Here that story fights for prominence. Cliff is doomed from the start by Sally's wild indifference to his dreams for them. She has her own dreams and they need that Dietrich-like determination. Her sense of love, true love, is summed up in her insincere "Maybe This Time" well performed by Betsy Rees and Stephen Foust's Cliff whose indifference to his one-time pickup, Bobby, keeps re-emerging in the book scenes. When Lopez' radio singer delivers  Kander and Ebb's "I Don't Care Much" it is a firm signal that Cliff's stay in Berlin and his attempt at "normalcy" with a woman not well-chosen are coming to an inevitable end. It all works well and did indeed shock some of the younger members of the audience who had never seen "Cabaret" before.

What does it take to make this show work? Well played music and well-performed roles, both of which exist in the Two of Us production. The right look is also of primary importance and the supporting characters being well defined also. Brian Yoick turns in  very good performance as Ernst. The designers have done a decent job here. Costumes are keyed to the change from the roaring 20s to the depression '30s. Costume design is credited to Constance Lopez, sets to Michael Virtuoso and lighting to Stephen Sanborn and John Leinung. Sound balance was way off on the first night, but I am sure will improve with the run. The choreography is by Debra Hughes, Constance Lopez and Emily Fuller.

For an older show with newer surprises "CABARET" will delight you with its newness and its current though accidental references to the times we live in now. You don't need any history books open on your lap just come prepared for a different sort of happy ending - one which includes making the difficult choices. 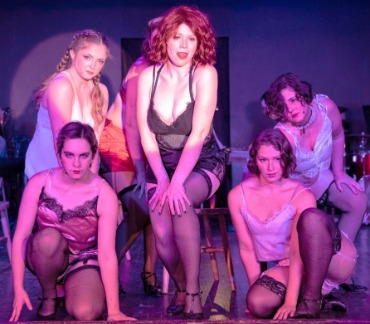 Cabaret plays at the Copake Grange Theater through November 21 For information and tickets go online to:   www.TheTwoOfUsProductions.org or call 518-758-1648