Dig﻿, ﻿﻿by Theresa Rebek. Directed by the Author.

"DIG" is set in a plant shop named Dig, an elaborate middle-class establishment not frequented by many customers. It isn't a nursery and it isn't a flower shop, but a place where a man with a mania for botany can move through the still world of green things and not seem peculiar. That man is Roger. He can be so singular and inactive that his threatening tone to others is much more benign than it sounds. He threatens his  employees but those threats rarely are carried out. The most active aspect of Roger is the active word on his front door, a word that implies much more than merely planting plants. Then one day his friend Lou comes calling bringing with him his daughter, Megan, on a prison release program. She has been through Hell, her infant son having been killed in a locked car in the summer heat. She has been deemed unfit and not sanely responsible for her actions. She has a tendency for violence. In plant terms for the plot of this play, Megan is grafted onto the trunk of Roger and the result is volatilely passive. It is also amazingly intriguing. Rebeck has created a situation in which all things are possible but not probable and surprises abound as the play moves along.

Andrea Syglowski  plays Megan; at times it feels as though she IS  Megan. This actress moves from the reasonable calm and passive state into the height of anger and/or passion at the drop of a leaf.  When she attacks a customer named Molly it is truly frightening and when she touches Roger on his shoulder it is so sincerely loving that it is hard to reconcile the two sides of this woman. As her story unfolds and truths are revealed  it is equally difficult not to rise from your seat and approach her with a conciliatory touch yourself. This is a grand portrayal of a disturbed soul. 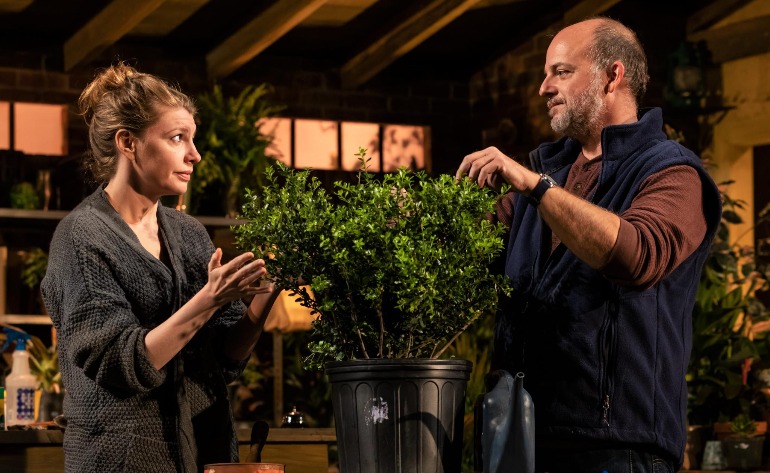 Roger is much harder to know and sympathize with at the beginning of the play. We learn little about him, and his background and all the clues are in his behavior in his shop. Jeffrey Bean, playing this role, has to bring a depth of understanding to the character and somehow communicate the actor's conclusions to the audience for Roger to live in this world Rebeck has dropped him into. Bean slowly becomes as compelling in his role as Syglowski is in her hers. The marginal awkwardness between them is part of what keeps this play so interesting. The two play well together; they keep the emotional interests at bay; they teach each other about life; they plant the seeds of friendship and wind up pruning the special plant they create to the point of open-branched revelations that threaten to produce poisoned fruit.

Greg Keller plays Roger's other employee, a man for whom plants read Cannabis. He is a character who cannot be anything other than awkward. Late in the play he moves from stupid to dangerous and while this is not the most compelling aspect of the play, it is one of those inevitable moments in a play that predicts many such times, but cleverly rarely delivers on them. That is certainly not the case with Everett. He has been Roger's delivery man and in his darkest moment in the play he is just that, ready to deliver in an uncomfortable situation. Keller handles all the indelicate and indicated traits perfectly.  At his worst he is slightly endearing and that's just fine. 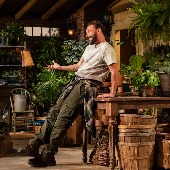 Gordon Clapp plays Megan's father Lou as irascible and crusty and he does a fine job with those traits. He has periods of genuine affection, both for Megan and for Roger, but they are not sustainable. This character is devoted to his own self-interests while trying, in vain, to be truly concerned abut the girl who has disgraced him and their family name. It is the way in which Clapp contests his own emotional investment in Lou that brings this character to life and infuses his Act Two scene with so much emotional sturm-und-drang.

Sarah Ellen Stephens as Molly is almost a point-counterpoint figure. She sets Megan on fire, than gently pats out those flames. It's a well-played role in a play that needs that precision to truly resonate. 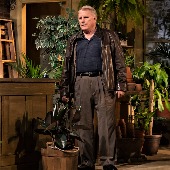 The truth, the honesty, the redemption

Megan's ex-husband, father of the dead boy, is played by David Mason. His appearance touches off the natural kerosene in the plant shop environment. What is quirky becomes dangerous and what is dangerous becomes explosive. The passion between them is horrible to witness and yet without it the play would perpetuate the lies that make Megan's life unsupportable. He is the missing link to her reality. Mason is absolutely frightening from the outset and as their scene progresses it brings Roger's relationship with Megan into total focus finally. While I'd rather have lived without this character he is most important to the drama in this comedy. Mason's Adam is haunting, as Adam should be; and like his namesake he is the progenitor of a world of mistakes and emotional upheavel. 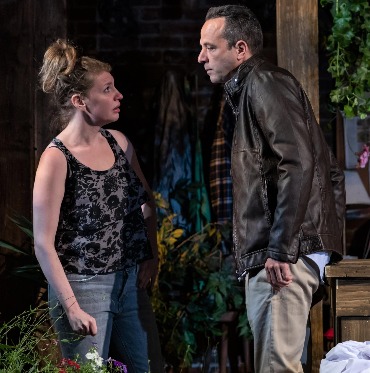 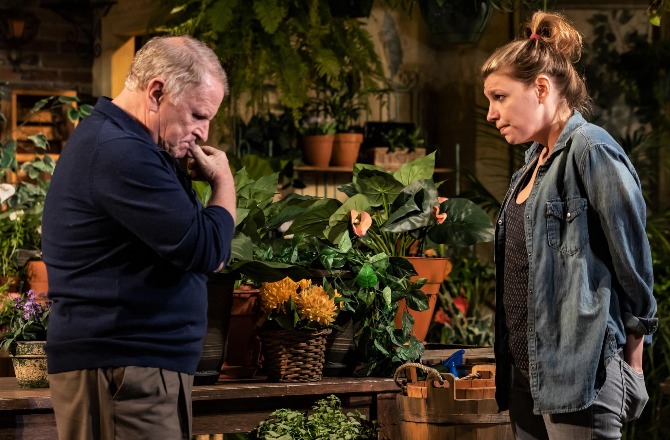 ﻿﻿The wonderful set has been designed by Christopher and Justin Swader. Character perfect costumes were created by Tilly Grimes and the effective and mood-creating lighting was designed by Philip S. Rosenberg. Sound and music is courtesy of Fitz Patton.

Theresa Rebeck has directed this company in her own play and she has realized exactly what she intended in writing it. There is an awkward reality on the Dorset stage that feels right, that comes together for the sake of exploring what makes unusual people tick. This is a play about intentions, about guilt, about honesty and its ramifications. This is definitely a play about the subjugation of the innocent. And the innocent abound, self-protective, scarred and sweetly humorous in their pain.

DIG plays at the Dorset Theatre Festival, 104 Cheney Road, Dorset, VT, through July 27. For information and tickets go to dorsettheatrefestival.org, or call the box office at 802-867-2223.