Fiddler on the Roof, Book by Joseph Stein, Lyrics by Sheldon Harnick, Music by Jerry Bock. Choreography by Jerome Robbins, recreated by Christopher Evans; with new choreography by Hofesh Shechter.

For me "Fiddler on the Roof" has always been a problematic show. I am possibly the only person on earth, though I cannot believe that, who hated Zero Mostel in the original company. Zero reportedly got bored with a role easily and when that happened he embroidered his performance with old-fashioned Jewish schtick (physical comedy and over-the-top stylings). The night I first saw it his performance was so thick with schtick that I was literally nauseated by his performance. It wasn't until I saw Hershel Bernardi perform the role that I began to like this musical. Bernardi played the role simply, straightforward, as written and directed. I found the emotions in it, the beauty and simplicity in the writing and fell in love with the exquisitely genuine emotional context of the music. "On the other hand" as the main character likes to say when he talks to God, the initial effect of Mostel's performance has always haunted this show for me and even the slightest bit of exaggeration, for me, is like a stick of dynamite applied to my reactions. I am happy to inform you that this touring production, currently at Proctors Theater in Schenectady, has a remarkable leading actor named Yehezkal Lazarov who is everything I could wish for in a Tevye. I believed him from beginning to end. There was no gesture out of place, no facial expression that said "this is a joke, folks," no vocal vamping and never a moment out of character. Mr. Lazarov is now my favorite Tevye and at the end of the show I mourned, really keened, his fate and his future as he left his homeland for an uncertain future. (If that's a spoiler for you, ignore it and see the show anyway.)

﻿This song is just one example of the musical stylings in this show. Everything works in the rich Eastern European traditions of movement and dress for the Jewish community at the turn of the last century. The populace of Anatevka, Russia live the way their parents lived and their parents before them. Each man has his work, inherited from his father. Every woman knows her responsibilities and lives and functions accordingly. They raise their children to do the same and even in the early 20th century this is how they function. That is the setting for this show which, without the mentions of America and the concept of moving to "The Holy Land" could easily be set in the middle 1850s.

Leading the way in this production are Lazarov and Maite Uzal as his wife Golde. Each actor plays aspects of their characters with nuances I have never seen before. Uzal is a harsher Golde than usual and as a result her rendition of the sensitive yet abrupt lyrics of "Do You Love Me?" take on a very realistic texture. The intellectual switch here in the middle of Act Two makes Golde a most endearing woman, a characteristic she has not shown before. Similarly, in her reactions to "Tevye's Dream" gave an absolute indication of the resolute nature of this woman who MUST obey the tenets of her community. Her constant harrassment of Lazarov's Tevye also rang remarkably true. His reactions to her, a mixture of dependent admiration and unfocused fears, brought a strong sense of reality to their relationship. His well-thought-out relationship with God had a natural humor mixed with an honest sense of need. Both of these actors kept the show real and honest and moving.

Their three oldest daughters around whom the show's story is based were played by Kelly Gabrielle Murphy as the eldest, Tzeitel, Ruthy Froch as Hodel, and Noa Luz Barenblat as Chava. All three were wonderfully lovely, fine dancers with strongly lyrical singing voices, and could easily have actually been sisters. On stage together they imparted an easy, informal, sisterly sensibility and each played her role with just the right amount of mutual concern. Jason Styres, who cast the show, is to be congratulated for this casting coup. 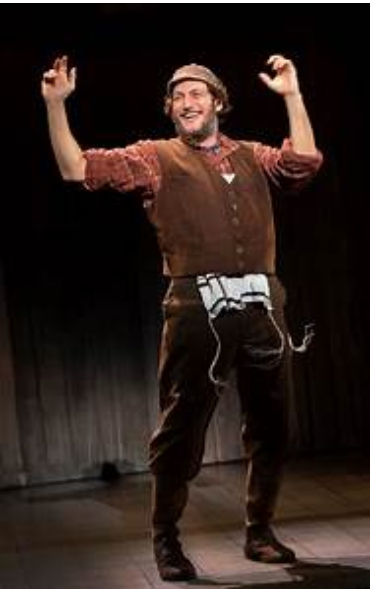 Their three suitors were also perfect for their roles. Motel the Tailor is delightfully played by Nick Siccone. Perchik the student is delicately handled by Nic Casaula. Fyedka, the Russian, is gorgeously portrayed by Jack O'Brien. Others in the company also proved to be fine examples of casting matching type and skills to the characters needs. Lazar Wolf, a butcher, is well represented by Jonathan von Mering. David Scott Colon is a smart and subtle Rabbi and his son is perfectly officious as played by Cam Cote. Brooke Wetterhahn was a perfect Grandma Tzeitel and Fruma-Sarah was played to perfection by Kelly Glyptis. The only character who seemed to be lacking some character was Yente the matchmaker whose tone was wrong in the hands of Carol Beaugard.

The show's "fourth ace" was its imagery

The direction and choreography were superb with the original abetted with new choreography by Hofesh Shechter, with the dancing dominating much of the musical. Based on Jerome Robbins' original concepts and work, which has inspired this revival, the show is as much a visual splendor as it is an actual play with story and songs. Costumed with a sense of authenticity by Catherine Zuber on expressionistc sets designed by Michael Yeargans/Mikiko Suzuki MacAdams, and illuminated by Donald Holder, this show is just as good to look at as it is to hear. Running two hours and fifty minutes, a good old-fashioned musical show length, the time flies by as Sholom Aleichem's characters live out their story for us.

This is a fine example of good, very good, Broadway. We are lucky to have the opportunity to see one of the best shows of any year in our backyard.

Fiddler on the Roof,  plays at Proctors Theatre, 432 State Street, Schenectady, NY through February 23. For information and tickets go to proctors.org or call the box office 518-346-6204.