"The fruit still looks good when the worm goes to work."﻿

When two generations of contentious Irish families come together for a funeral you can depend on this fact: realities, seen from four points of view, are bound to clash and provoke some curious interactions. They may not be funny, but they will be amusing. In John Patrick Shanley's un-romantic comedy, Outside Mullingar, currently on stage at the Unicorn Theatre in Stockbridge, MA this theory is made reality nightly.

In Shanley's play Rosemary Muldoon and her neighbor Anthony Reilly have been fighting ever since he pushed her over when she was six years old. She has taken a strip of his family's land and forced an uncomfortable entry into their home and for thirty-six years they've been at it. His father, Tony, doesn't approve of his son's choices in life and plans to cut him out of his natural inheritance. Her mother dislikes Rosemary's attitudes but supports her difficult stance on the neighbor-boy's meanness. At least that is how things seem when Aiofe Muldoon accepts a drink after her husband's funeral from their neighbors. But she won't drink from a Reilly glass because of a personal distaste.

But the generations pass and within an hour of stage time (a year in fact) both of the older generation have passed away leaving the very adult children to deal with the legacies of land and relationships. The play had a very limited Broadway run in 2014 and is making its way through regional theaters (It was seen at the Dorset Theatre Festival in 2015). 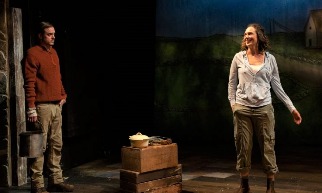 A Comedy of Many Errors 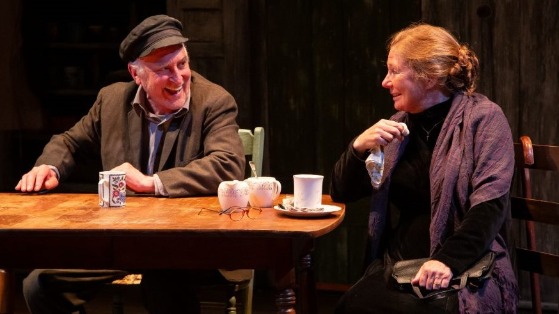 For the older generation things seem to be staying as they've always been with the exception of Tony's need to disinherit his unsatisfactory son. Jeffrey DeMunn delivers a dynamite performance as the old man whose health is fading and whose death will correct many of the errors of his relationship with the boy he has studiously avoided loving because of an inadvertent resemblance to his wife's father, a Kelly. DeMunn is charming even in his lack of affection for Anthony and in his night-before-death scene Tony warms into the man he should always have been. It is a most affecting scene to witness as Anthony tries to settle his score with his father while Tony attempts to override his objections to a younger man who has always disappointed him. Their resolution is nothing short of heart-warming and moving.

With an all too distinct Irish accent Deborah Hedwall delivers a strong picture of an aging Irishwoman, a perfect farmers wife, who believes she understands her difficult daughter and whether or not she does, she will support the girl's decisions unflaggingly. Hedwall seems so authentic I had difficulty understanding some of her lines, but midway through the first scene I became accustomed to her patterns and would attest to the fact that she gave a performance nothing short of the Abbey Theatre. She hasn't been given the advantage of a final scene such as DeMunn's which is a shame for it would have been fascinating to watch her way through the finalities her character deserves. 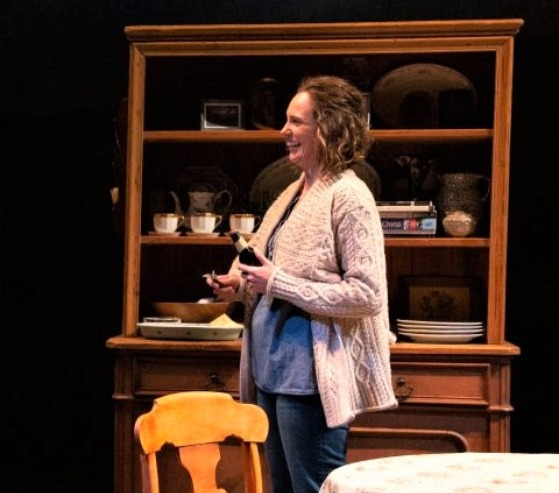 As good as the older couple of actors are, the lengthy final scene is left to the younger actors. James McMenamin as Anthony has many secrets to reveal in a long, drawn out series of confessions which he plays with a naturalness that is beautiful to watch. Director Karen Allen has endowed this actor with the right to act less and "be" more and he has taken this in stride and plays his role with strength and beauty.

Shannon Marie Sullivan doubles him in reality-playing. She is simply divine in this role and as she softens we finally understand her take on things in the earlier scene with her mother and his father. Rosemary is a woman of conviction and Sullivan gives it her all. Brava!

Allen's direction is straightforward and honest and it works very well, her best work in this area yet. She is aided by a fascinating set designed by John McDermott, perfect costumes by Carissa Kelly and fine lighting design by Shawn Boyle. Come to think of it, perhaps this is the American Abbey Theatre Company. Even for Scott Killian, composer and sound designer, this is a comfortable crew to work with. And it's a good, good show.

Outside Mullingar plays at the Berkshire Theatre Group's Unicorn Theatre, 6 East Street, Stockbridge, MA through July 13. For information and tickets go to www.berkshiretheatregroup.org or call the box office at 413-997-4444.