The Most Spectacularly Lamentable Trial of Miz Martha Washington,﻿ by James Ijames. Directed by Patrick White.

Black Theatre Troup of Upstate NY has brought a stunning new play to the Sage Colleges Meader Little Theatre in Troy, NY for a short run. The play lasts 91 minutes without an intermission in this auditorium that provides plenty of space for the company's simple set to be seen - it is a map of Mount Vernon, Virginia painted on the floor, six chairs, a doorway and a very mobile bed. This is actually more than the company needs to adequately present James Ijames' 2014 play "The Most Spectacularly Lamentable Trial of Miz Martha Washington."

Martha Washington, the self-named "Mother of America," lies dying in her bed; over her head lies the fate of her slaves - by the order of her late husband George her death will free the more than 200 slaves she still owns. Her own attitude is "over my dead body" which is eagerly anticipated by two of the slaves, Doll and Priscilla. As she is reluctant to grant them freedom, so is she reluctant to admit that her oldest, closest companion - the slave Ann Dandridge - is actually her own half-sister. As death comes closer, Miz Martha moves closer to her reality through illusions, dreams, encounters and manifestations of her late husband. The history of the black race in America is among the illusions she suffers and the poignancy of that encounter staggers not just Martha but the rest of us as well.

Young Moriah Edmunds plays a little boy who figures prominently in both Martha's dreams and in her own bedroom. He also represents John Parke "Jacky" Custis, Martha's son by her first marriage. Edmunds is charming, especially as the judge in Martha's trial, a virtual fantasy piece right out of Moss Hart's "Lady in the Dark." The child actor (actress) is one of the busiest people in the play and under Patrick White's excellent guidance one of the most versatile as well. 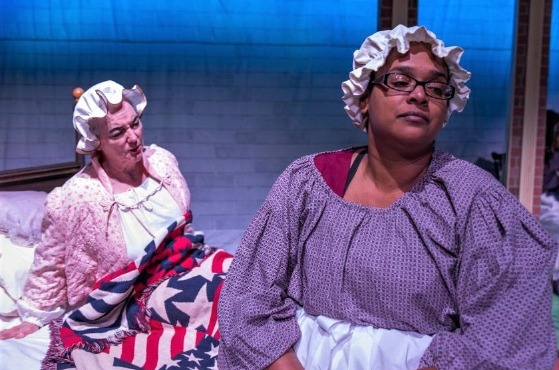 Lucy Breyer's performance as the dying Martha has poignancy locked up. Whether crying for her husband or playing a TV game show "Name That Revolutionary" which she loses when she cannot get George Washington's name spoken in time, Breyer brings a sense of strong reality to every moment of this quirky play.At her best she has complete control of each moment and at her weakest she has her audience in the palm of her hand as she swirls through the stage space in her dynamic bed.

Elsa Alvarez plays Ann Rutledge, Martha's unacknowledged half-sister. She plays some of her lines with an incredible diffidence that allows her to dominate her scenes with Martha without any perceivable effort. This character knows her place and uses that knowledge to always come out on top. I loved Alvarez's strength and simplicity. It seemed exactly right for this play. 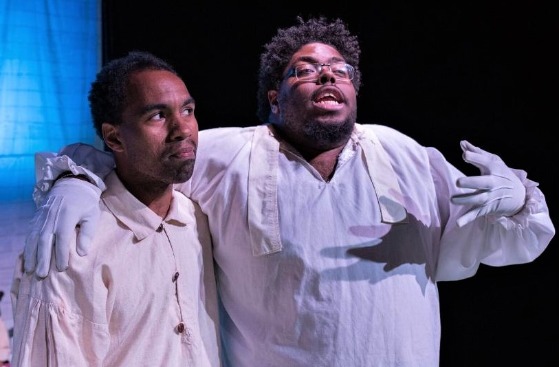 There are two men in this production and they couldn't be less alike if they tried. Marquis Heath, the thin one, plays Sucky Boy, a slave who is musical, sweet, clever and ruthless, and that is just a short list of examples of his character. He is fascinating to watch as he morphs from 1930s Warner Brothers black to 21st century maneuverer and he goes in both directions all the time giving Sucky Boy a rather unique representation of the classic black characters he plays to keep telling the story.

Aaron Moore physically dominates the stage. When he plays King George III for the TV game-show parody he is as much a king as Donald Trump has proven to be, dominating more through presence than through self-observed right. He is frightening at times and comic at other times. If the play lacks just one thing it is not giving Davy a moment to be honestly emotional. Moore would do that so well.

Angelique Powell as Doll and Morgan Heyward as Priscilla;

Angelique Powell and Morgan Heyward are two funny women. Their humor lights up the play at moments and even then there is a sardonic flash in their acting. As enjoyable as they are they are also threatening which makes their humor almost devilish, almost demonic. Both women are great at what they do and they demand our interest any time they're on stage.

Director Patrick White has worked well with this company, producing a fascinating look at the mind and heart of an elderly widow on her deathbed. Rather than producing a definitive final moment, White has left us with an open issue on freedom, its meaning and its availability. Martha's son Jackie was also a slave-holder, you see, and the mention of him brings him and his beliefs into the picture without defining his role in her life and death. For this fine company and this work, there are few answers to the pressing questions the playwright presents us. 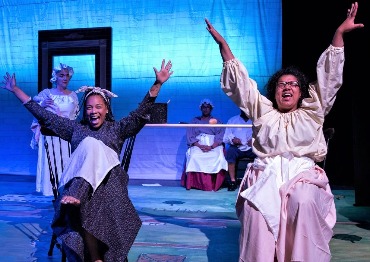 The Most Spectacularly Lamentable Trial of Miz Martha Washington plays at the Meader Little Theatre at Russell Sage College, 5 Division Street, Troy, NY through June 16.  For information and tickets go to blacktheatretroupupstateny.org or call 518-833-2662.