"What an incredible whackadoodle!"

There are a few things you don't expect to hear from the mouth of Agatha Christie. Quite a few of them show up in this world premiere play now on stage at the Dorset Theatre Festival in Dorset, Vermont. In a play that shows us the very human side of a woman we all think we know because we know her books and plays there are lessons aplenty about the culpability of a woman who fears for her own sanity. Driven near to despair by a husband whose philandering has outgrown their fragile relationship, Agatha takes matters into her own capable hands and nearly disappears into the abyss that is her world. It is her disappearance that the play is concerned with, her disappearance in December, 1926 and the effect it has on her and the world along with its more contemporary effect on a fan or two.

There are actually three plays in this play: Agatha's story is the first and Lucy's is the second. Then, at last, is a play that Agatha has written and Lucy has almost discovered, a play in which Agatha is a character. Opening night it was a bit confusing as the sound in the theatre was muddy and dialogue was a strain to hear and this is a play you need to hear; every word needs to be as clear as crystal.

Developed in Dorset Theatre Festival's Women Artists Writing Group over a period of years it should be the big hit of the year, but I think it has missed its mark somehow. A friend who read the script and liked it very much seemed to feel, at intermission, that the play he read was not the play he was seeing. That's a pity. 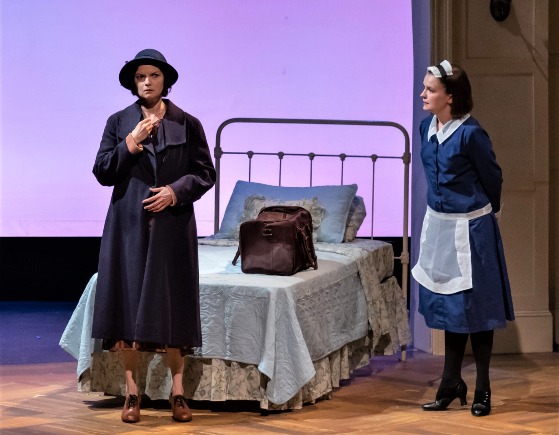 Mary Bacon is Mrs. Christie. Already a famous author, Agatha struggles with self-identification and self-worth as her husband complains about her lack of marital compliance and her self-reliance forcing his need for other women. Bacon plays the instability of this woman beautifully exhibiting both strengths and weaknesses with equal force. In the scenes "at home" she is beautiful, commanding and even sexy when it is her best weapon of defense. But when she loses self-control Bacon plays a loosely neurotic character who we lose completely for a while. The script asks her to become distracted and she does that, but it plays as peculiar rather than as a mental breakdown which is what it should be and this dominates a good section of the play.

As her assistant (at home) and a hotel maid (in the mentally shattered scenes) Betsy Hogg is terrific. She displays a unique talent for the understated. In the hotel, as Mary, she enters and enters and enters destroying time and delivering breakfast and she is both funny and alarming simultaneously which is wonderful to watch. As Charlotte at home, she is a clever, courageous young woman who supports the ideals of Mrs. Christie with the clipped, British sense of "house in order" that is classic Christie. Hogg is a distinct asset to this production.

There are five male characters in this play. The oddest one is Christie's fastidious Belgian detective Hercule Poirot played by Sevan Greene in a manner that deletes fastidious for the aging bachelor sleuth and makes him somewhat fey and just a bit gay. During her "breakdown" Poirot joins her in the hotel and becomes her constant escort, even to a bathing scene which is genuinely slapstick in nature and sometimes really funny. His presence replaces a psychiatrist in her journey to sanity and the hotel room stands in for the asylum she truly needs to reside in just as the bathtub replaces the hotel pool or seaside beach. Greene is more than over the top, he is a comic relief whose Belgian accent is disorienting for at best he is about twenty percent understandable.

At around the time this play is set in, Christie began to find the character of Poirot "insufferable" and that plays into their relationship in this play. She would like nothing better than to have him go away, but he won't (and he didn't, really, until 1975) and his pursuit of her shoves her back into a sanity she is resisting. Greene is not the five feet four inch detective but is rather a large, domineering figure who throws Christie into miniature which for Christie fans may be very disconcerting. This is just a detail, though one that seems rather endemic.

Lucy, played by Jennifer Mudge, is a diehard fan, who has come to an Agatha Christie Festival at the author's historic home, hoping to discover something about herself through discovering Christie. Lucy begins a personal journey assisted by a quirky old woman, Jane, who prefers to travel alone, played by Susan Greenhill. All too obviously loosely based on Christie's Jane Marple, the older woman asks questions and points Lucy to the right path to answers. Both women are about as quirky as you can get and even Mudge's American accent seems to be an actress's invention which is odd.

Greenhill's performance is also odd, hard to understand with a midland's accent, I think, that takes away half her words.

Mudge does much better, but her character needs a bit of developing to make it a credible one. Near the end of Lucy's journey to truth and revelations she becomes the scribe, the inadvertent secretary, to Christie whose lost play :Lucy transcribes as it is played out. 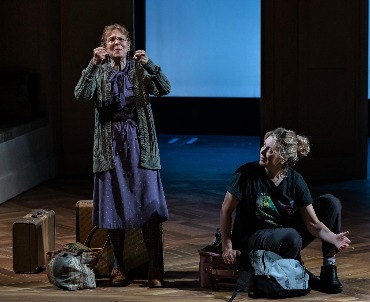 The Mysterious Affair at Styles

The play is set at the Christie residence, Styles; this fictional location is where Poirot first appears in Christie's 1916/1920 book. In it a woman has been fatally poisoned, a plot point that author Heidi Armbruster uses in her play about Mrs. Christie's unexpected disappearance. The set, designed by Alexander Woodward is as remarkably mysterious and flexible as any Christie plot might be, shifting and altering as needed. 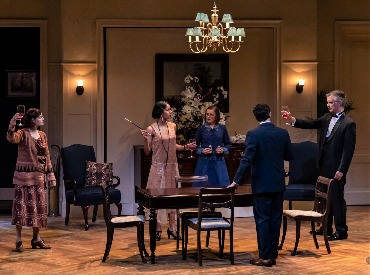 Michael Frederic as Archibald Christie is as inflexible a character as any villain might be in a domestic drama about affluence and its influence on the structure of a marriage. He makes this very real and the lack of sympathy he achieves from the audience is based in no small part on his flaunting his infidelity and his cold reaction to Agatha's sexual approach to saving her marriage. As his paramour, Nancy Neale, Hannah Caton gives a perfect performance. Stephen Stocking delivers a smarmy British bachelor to an idealistic degree.

Giovanna Sardelli makes the script work to the best of her ability, but the script still needs some work, I fear. This is just where the play goes wrong: too much has been drawn from Christie's fiction, forced onto the reality of her life and left to the audience to sort out while the play is going on. With the difficulty of sound in a theater in which I have never found that a problem before, the accents, the oddity of style at Styles and elsewhere, the beliefs about the truth regarding the disappearance of Agatha Christie and the peculiar adventure of Lucy's personal journey from bartender to scribe there is almost too much to take in at one time.

Brava to Sarah Nietfeld for lovely costumes and to Stacey Derosier for her mood-filled lighting.as well as to Fitz Patton for the sound design of the show. Alyssa K. Howard, the stage manager, for executing wonderful set changes and presenting a cue-perfect show on opening night. I had hoped that this play would be the hit of the season, but too much about it, just yet, has made that a no-go.  For fans of Christie this might work or it might not. For audiences with little knowledge of Mrs. Christie's work this might be just another, slightly confusing, play. Or I could be wrong on all counts and it might be the hit everyone expected. As Agatha Christie might say, "but it's all a mystery to me."

﻿﻿Mrs. Christie plays at the Dorset Theatre Festival, 104 Cheney Road, Dorset, VT through August 17. For information and tickets go to dorsettheeatrefestival.org  or call the box office at 802-867-2223.