Directed and Choreographed by Gerry McIntyre.

On September 15, 1963 Nina Simone, a classically trained pianist, turned cabaret singer, was in a church in Birmingham Alabama rehearsing for a performance when the incidents of the day inspired her to write a song she called "Mississippi Goddam." The play at the Unicorn Theatre in Stockbridge, Massachusetts recounts the events in fictional form. Simone wrote the song, lyrics and music, in under an hour. It became her anthem. That day she also wrote the songs "Ain't Got No, I Got Life", "Four Women" and "To Be Young, Gifted and Black."

"What inspired the singer and pianist was this: Four young Black girls died that day in a white supremacist terror attack that would become known as the 16th Street Baptist Church bombing. But the incongruously upbeat show tune wasn’t just crying out about this sole event. Simone was also lamenting the recent gunning down of civil rights activist Medgar Evers in Mississippi. She was voicing anguish about all the acts of violence and oppression against Black communities in the segregated South. She was weaponizing music itself," wrote historian Liz Fields. Utilizing these facts, playwright Christina Ham has constructed her play "Nina Simone: Four Women."

Simone has become the dramatic subject for two new plays I've seen this week, the other being "Little Girl Blue," now playing at Goodspeed by the River in East Haddam, Connecticut. Its first act, set five years after these Alabama events, dealt with the singer's reaction to the death of Martin Luther King, Jr. Seeing the plays so close together one begins to understand how the politics of the 1960s formed the Nina Simone we remember. In this play the future civil rights enthusiast first begins to realize her powers to influence people. In just under two hours running time Felicia Curry undergoes major attitude alterations while playing Simone just trying to gather her creative juices into one tumbler of musical wrath combined with righteous indignation. Surrounded by three strangers who only interfere with her process she manages to get her thoughts down on paper and use them to further inspire new work from herself, including the title song "Four Women."

The song "Four Women" describes four women with skin black, tan, yellow and brown  Their similariities and differences are the lyric, nothing more. However it is clear that they are all women of color and Simone uses the comparisons to point out that , in truth, they are all the same. The playwright uses this song and its concept to craete a play around her central story of Simone writing her anthem song. These women are as different as can be, and yet they have all sought refuge from the guns, public fury and the bombings. In their awkward  dissimilarities they have then the same route to safety. They slowly discover, as Simone does, that scared or angry, or confused they share a commonality with this stranger in their midst. 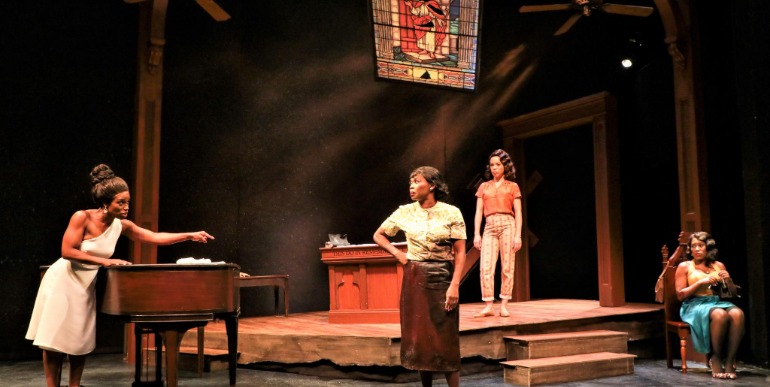 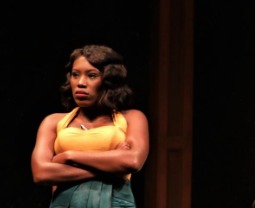 The last woman to join is Sweet Thing, a street-walker whose volatility is over the top. She draws a knife as easily as she flirts. Najah Hetsberger plays her with broad sweeps and a knife technique that is less than convincing. She is in complete contrast to Sasha Hutchings' Sephronia who is almost too sugary to be real. Aunt Sarah, played by Darlesia Cearcy, is the most believable of the trio even if it seems we've seen her played before by Ethel Waters and a dozen others.  These characters, though well-portrqyed  are symbols of "types" - not honestly drawn new characters.

Felicia Curry does a nice job with Nina Simone. She is a strong actress and singer, pretty with delicate features, and not resembling the jazz star at all. She plays the play and not the person, so it matters less, somehow. It is hard for me not to see the actress having so recently seen another one play the same role in a different play (this might be clouding my judgement). I enjoyed her voice and her interpretations of the twelve songs she sings along the way.

Gerry McIntyre has staged this piece on the small stage at the Unicorn and kept the action prominent all the time. There is a constant threat of real violence amplified by the fine sound design work of Kaique DeSouza. Dante Harrell plays the unseen and never acknowledged role of accompanist and his percussionist partner is Diego Mongue. Appropriate costumes were designed by Sarafina Bush and the fabulous lighting came from Matthew E. Adelson. Overall, though this is not its premiere production, the play feels like a work in progress with more problems to solve. I enjoyed the play but not as much as I'd hoped I would. 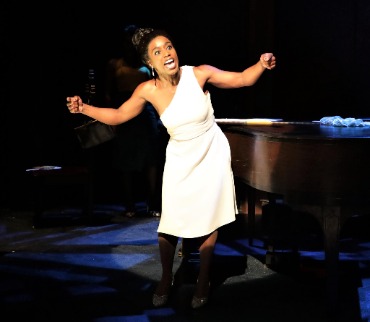 ﻿Nina Simone: Four Women ﻿plays at the Unicorn Theatre on the Stockbridge Campus  (route 7) of The Berkshire Theatre Group through September 5. For information and tickets call the box office at 413-992-4444 or visit their website at www.berkshiretheatregtoup.org