For the second time this season a new play by Mark St. Germain graces our region's stages and for the second time this season it stars one of our favorite players, Harriet Harris. This is a double delight at the end of July. I have been ever-interested in Eleanor Roosevelt since I met her when I was just four years old. St. Germain, who seems to love writing plays about eternal Americans has given us many, from Henry Ford to Dr. Ruth Westheimer and Typhoid Mary has finally found the most worthwhile person to resuscitate, the widow of President Franklin Delano Roosevelt. Her history is just extraordinary. She accomplished more than most people even read about in their lifetimes.  In this play, about ninety minutes long, she relives a lot of them as she rests on a favorite bench in Washington DC's Rock Creek Cemetery.  Her word comes to life in Brian Prather's inventive set plays out on a park bench using a bag, a fur boa, a hat and a coat. This is theater of merged emotions, motions, memories and imaginations.

Eleanor was not a pretty baby. She was, in fact, not a pretty woman. She was married to very handsome man, her cousin, and they lived a very handsome life together and apart. Hers was made handsomer - or prettier if you prefer - through her activities, her choices and her work. No first lady of the land, not Dolly Madison, Jackie Kennedy or Mary Todd Lincoln ever did as much on the world stage as Eleanor. No one sacrificed as much, worked as hard or accomplished as much. This is just the truth that St. Germain's play brings to life through the delightful chatter he gives this character in the physical and verbal person  of Harriet Harris. She is the ideal interpreter  of his text, giving a vivid near-reincarnation of this woman.

It's not that she looks like her, or even sounds that much like her, but Harris manages to conjure up the feel of her on stage. This is not imitation; it's acting. She allows us to feel what Eleanor feels in her memories of her youth, in her marriage, in her relationships with those she meets and makes a part of her life. Her long affair with reporter Lorena Hickock is underplayed; her romance with her bodyguard is underplayed. Her involvement with her many causes, with the United Nations is underplayed and yet we feel that we've experienced them all as Harris speaks of them. I don't know how she does it but some credit must be shared with her director Henry Stram, a man I've never encountered before who, according to his program bio, has known Harriet Harris for a lifetime. Their work together on this play is extraordinary. That's the only word for it.﻿ 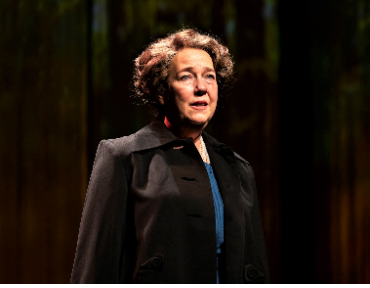 I don't like to praise too much, but there is nothing to say about this play, performance, production  that comes out negative. It is simply a fine evening of theater. The costume by Alejo Vieti is 1950s  perfect. The lighting design by Philip S. Rosenberg struck the right tones and the sound design by Eddy Mineshi brought to mind Eleanor's eras, places and whims wonderfully. Even Mary Schilling-Martin's character wig felt right although it was not what I remember of the woman. The opening night audience cheered Harris and the play and the production deservedly and now so do I. Eleanor is a triumph, all the way. And that was her life.

ELEANOR plays on Barrington Stage Company's Boyd-Quinson Stage, on Union Street in Pittsfield, MA through August 7. For information and tickets go to their website, www.barringtonstageco.org.﻿