﻿"I was counting down from one thousand by 7s."

Frustration marks the central issue in this intriguing play about three people who shouldn't spend much time together. Each one has issues that have serious, difficult effects on the others and no one is happy about it. We are in front of Alice's fireworks stand, across the street from the ancestral home where she lives with Connor, son of the town's former minister, when they are visited, or rather supplanted by Marnie, Alice's quirky granddaughter. Marnie has little use for anyone, she says, but the truth behind that statement is what confronts us all in this ninety minute play.  For a seemingly straightforward set-up this play takes a lot of emotional turns and twists that lead us down a long and stony path to understanding.

Leigh Strimbeck plays Alice ,a woman whose volatile nature can be appreciated only by people who lover her and trust her not to blow apart. She brings undying verve to the role. You like her in spite of a better judgement which says, almost instantly, stay away from this woman - she's dangerous.  Her live-in friend, lover, guardian, Connor, is played by Daniel Hall Kuhn and he is a sweety, someone whose loyalty is to be cherished.  Both actors deliver every punch in the script with clarity.

Suicide haunts this play; it seems to run in the Lewis family, going as far back as Merriwether himself, dead in 1809 of gunshot wounds assumed to be self-inflicted. Alice fears not for herself but for Marnie, wonderfully portrayed by Montana Lampert Hoover whose edginess shouts volumes of self-pity and equal volumes of assertive aggressiveness.  In those rare moments when the tensions between the two women drop down to calmer human levels we can see what might grow between them binding them into a somewhat normal, ordinary companionship. These are rare times but much cherished by the audience. Both actresses have incredible capacities of aggravation - true relatives.  They almost hand the play over to Kuhn whose voice and movement set him apart from the women he stands between. In the final scene, Connor makes some decisions that threaten to end the Lewis dynasty in this town in Idaho named for him. 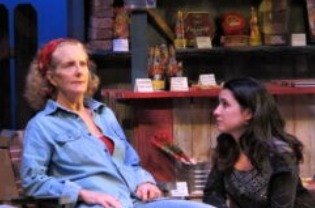 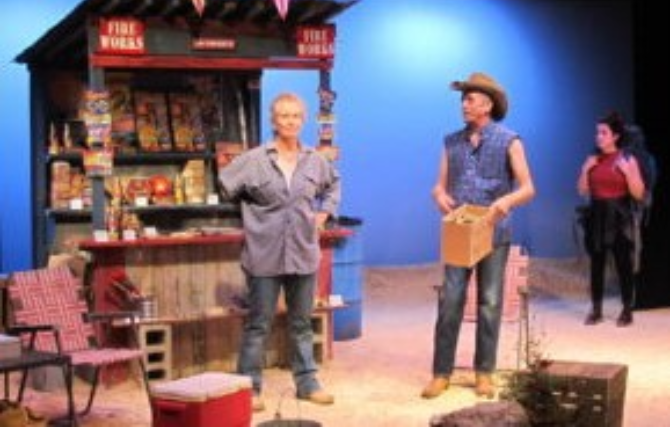 You can feel the play's heat in its setting by John Sowle under the lighting by Nicholas Hawrylko. Michelle Rogers costumes help create the July imagery. To be specially commended is the dual work of the lighting designer and the sound designer Carmen Borgia for their fireworks display which seems so real I kept looking for the display itself. Hunter's play is a unique look at the family mystique. His pairings cover a range from sympathetic to hostile to the gravitas of suicide and the joys of childbirth. If there are relationship possibilities missing from this relatively short piece I cannot imagine what they might be. Not even Eugene O'Neill could squeeze in more familial needs than Hunter has exposed.  The wonderful ensemble does the author and director proud. Sara Lampert Hoover, the director, has done a remarkable job with this brave play.

Lewston plays at the Bridge Street Theatre, 44 W. Bridge Street, Catskill, NY through October 17. TFor information and tickets call the box office at 518-943-3818- or go their website at /bridgest.org.