"A little success can be a setup for failure."

When your still youthful mother is a stage and screen star, and when her current younger lover is a famous playwright and fiction author adored by women everywhere, what can you do except to follow in their footsteps? In this play, currently on stage at Hubbard Hall in Cambridge, NY, Con attempts to do that. He has written a play - in a new form - and has starred the young woman he adores in it and is presenting it to an invited audience.  Emma, his mother, and Trigorin, her romantic opposite are among the assembled folks. You can guess what happens. It's not good and Con is humiliated. This is the initial setup for both Chekhov and playwright Aaron Posner. Posner's play, "Stupid F*%cking Bird" is a little bit loose, a comedy with tragic overtones, that follows the original pretty closely, but moves it into our very own time and place. The author has left certain things open for the actors and director to work out themselves and this company, under the direction of Kirk Jackson, do exactly that. They even involve the audience in some of their decisions and though sometimes that can be off-putting, it works as a device in this production. 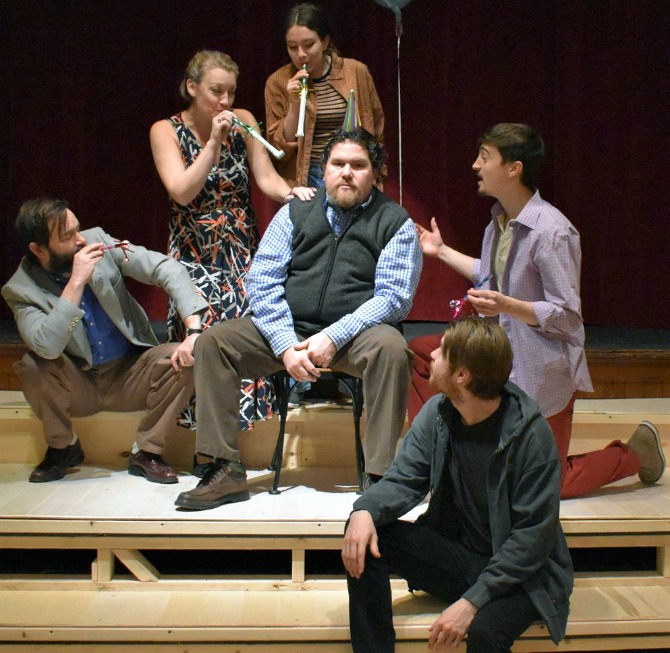 There is a party for Sorn, Emma's older brother, when he turns 60.  We all got to sing Happy Birthday.  David Snider plays Sorn and he brings a new "life-of-the-party" gloom to the role. He is charming and loveable and though Sorn is not a pessimist, he certainly is not one to hold out hope as a major option. Snider gives the role a stronger feeling than is usual in the Chekhov but here he is just right. In a way the part is usually a representative eye and voice of the playwright (Chekhov and Sorn are both doctors) here he seems much more his own character.  That could be due to the language of the play which is so very everyday America 2019.

Though not usually necessary in a comedy to have a comic relief character that is just what Sorn becomes. And whether or not this play is a comedy depends upon its audience. There are two suicides, infidelity and a touch of Oedipus Complex in the mix. We all bring our own experiences into the theater with this one. So, come prepared. 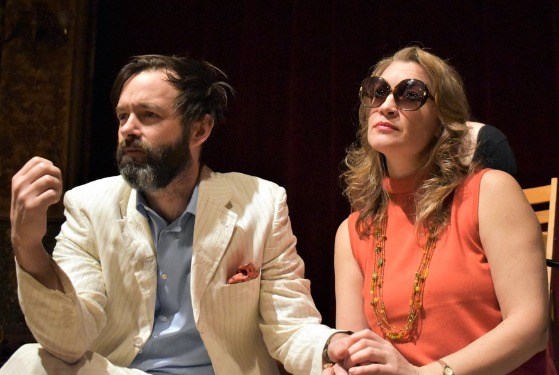 Couples are the key to this play. It is almost Shakespearian, sort of Midsummer Night's Dream-ish. Emma loves Trigorin who loves her but also loves every young woman who admires him. Emma loves her son, Con, but reviles him for being himself so that she can console him afterward, but he loves Nina and though always trying to gain Emma's approval, rejects every other emotion she displays toward him. She is embarrassed by her son and dislikes Nina who wants to be Emma and to do so she tries to seduce Trigorin. Mash is mad about Con who discounts her, especially when his best friend, Dev, announces he adores Mash. There are moments when you wish for Puck, Shakespearan spirit who strightens all of this out with some juice from a flower. However, there is no Puck to rely on here; not Emma, the Queen of the stage, and not even the good doctor Sorn can sort out this ensemble. 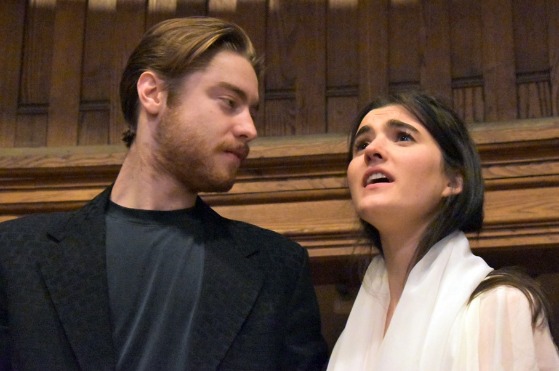 Romance, it would seem, guides this play along its way, but no. It is troublesome love arrangements that pull the train of action here. At least in Act One.  By Act Three (the play has only one intermission) many things have transpired and couples have been rearranged with some surprises in the mix. You now know more than you need to in order to follow the play. So let's talk about the people.This production utilizes the talents of seven actors (two of the Actors' Equity members). Kim Stauffer as Emma and Jesse Pennington are the "professional" duo. Stauffer was a delight as the big star and adult  young playwright's mother. She was effective in all her scenes and all of Emma's quirky moods. Stauffer can chill with a gesture, thrill with a smile, and simply will anyone to do her bidding with vocal alacrity and a look that could kill. She's been good before, but here she was simply perfect.

Pennington, who has a vast resume and an Obie Award, had a tendency to swallow a third of each line keeping us in the dark as to what he was saying. He is handsome and possesses a soft lyrical voice which should have given his romantic figure an alluring personality, but those lost words made that difficult.

Evan McFarland's Con was bombastic and depressive, just the right interpretation from start to finish. The role and the character are both melodramatic and he pulled out all the stops to sustain this image and style.

His best friend and confidante, Dev, was played by Louis Celt, with the best possible manner keeping his attention on the action and Dev's emotional turmoil while confiding his thoughts to us. The love of his life, Mash, was given a wonderfully grumpy personality by Annabel Hoffman. This beautifully talented actress sang songs, played the ukelele and was entrancing in spite of Mash's negativity. More a tomboy in act one and a devoted madame in the final act she managed to meld the two variants nicely. 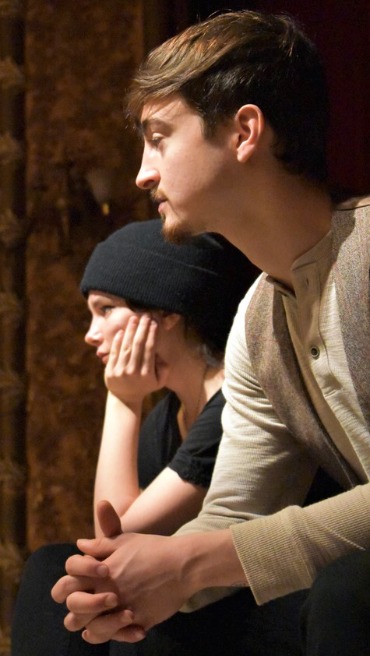 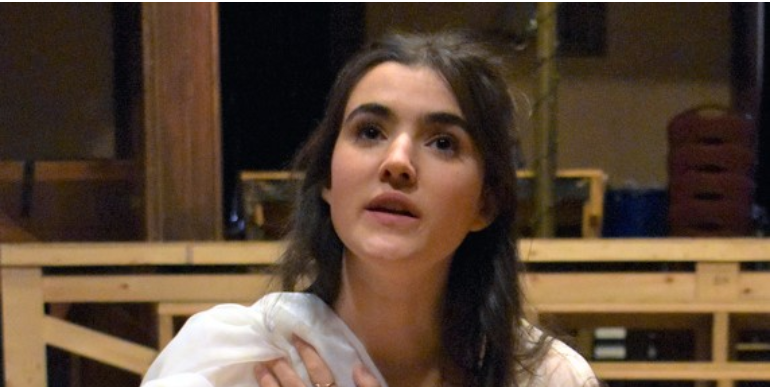 The weird rivalry in this play has always included mother, son, and girl with an extra angle for the adult lover. When Emma gives her own dress to Nina we know why: it has been defiled by a younger woman. What happens to them all later is what we wait to discover and this show keeps the pattern alive, at least for a while. 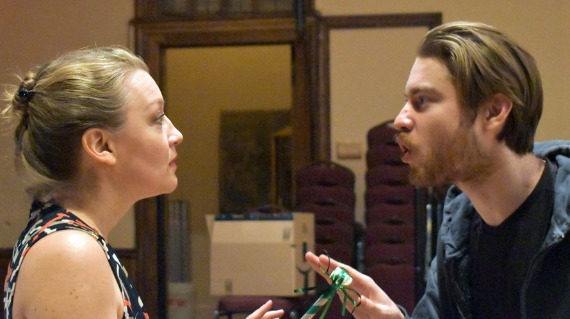 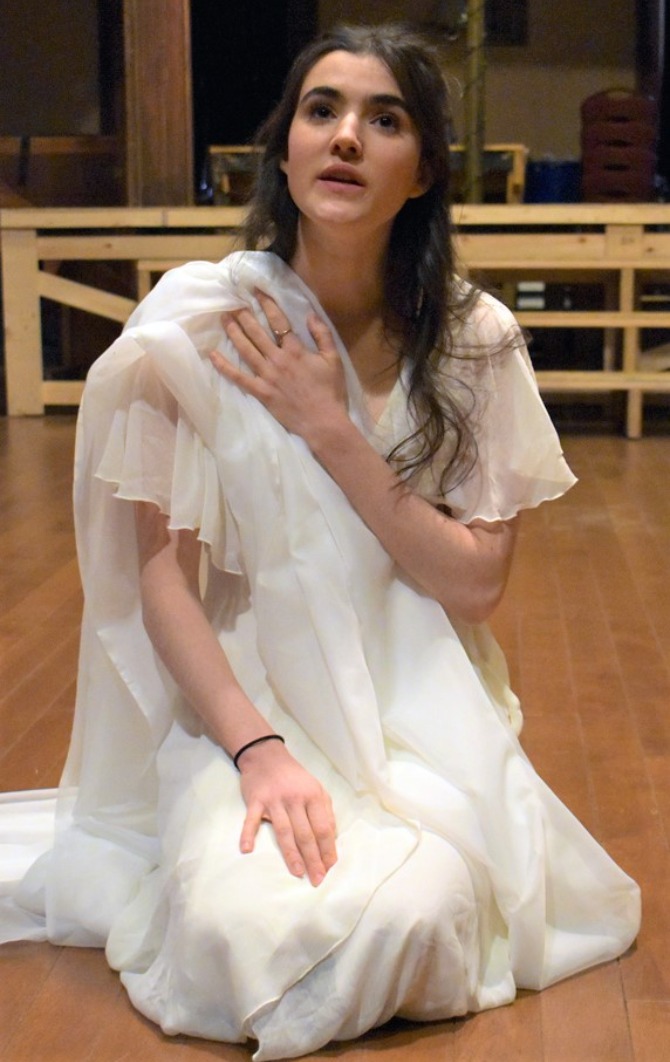 Nina, played here by Amrita Li Newton, has always been a bit of a mystery character. She is earthy yet ethereal, almost unreal for a while. Then she is definitively sensual and self-assured with a growing coldness that takes everyone by surprise. Later she is a shadow character with so much unexplained about her that she almost approaches that original sense of herself but without pride or pleasure. Newton manages all those changes in this production which is quite a challenge. We can easily accept all of that in a character from the past, but it is the contemporary woman in the light of #MeToo, that makes the challenge greater. Newton, presumably guided by the director, allows this to be very real indeed.

Kirk Jackson has done a wonderful job maneuvering his company from place to place on his isthmus shaped stage. He focuses us as well as his actors as things happen where they should. He also manages to surprise us with his actors appearances in places, solo and in chorus. Jackson has found neat solutions to the stagnancy of Chekhov's construction.

The play covers four years and a week in just a bit over two hours and that is time well-spent. The new script is amusing, there are laughs throughout, yet it remains faithful to Chekhov's intentions, a perfect combination. The only challenge to those of us sitting and watching is how involved can we become without feeling silly or imposed upon. Everyone will react in a different way and all ways here, as Louis Carroll wrote, "are the Queen's ways." So watch out for your head.

Stupid F*%cking Bird plays at Hubbard Hall Center for the Arts and Education, 25 East Main Street, Cambridge, NY (just west of Rte. 22) through February 2. For information and tickets go to hubbardhall.org or call 518-677-2495.