﻿"...a str﻿ong sense of personal entitlement."

What Sam Peliczowski, an aspiring actor in New York City, is missing is an understanding of the basic characteristics he possesses. He works in the basement office of a posh and trendy Manhattan restaurant taking reservations. . . and just about any other type of orders tossed his way by various members of the place’s staff. He takes the guff his agent’s receptionist throws at him and he quietly accepts his friend Jerry’s offhand cracks about his inability to meet even Jerry’s meager standards of success.

At the center of Sam’s world, during the one-shift course of this play-is his father whose own neediness emerges in the quiet and accepting manner in which he accepts his son’s need to ignore him, put him on hold, say he’ll call his dad back soon. Surrounding the principal tale of Sam, his Dad and his mother's recent death, are the customers who have, or alter their capacities, or are just desperate to make reservations for dinner or lunch. In all there are about forty different characters in this play including Gwyneth Paltrow's assistant Brice, each and every one of them voiced by actor Ryan Palmer who is cast as Sam. 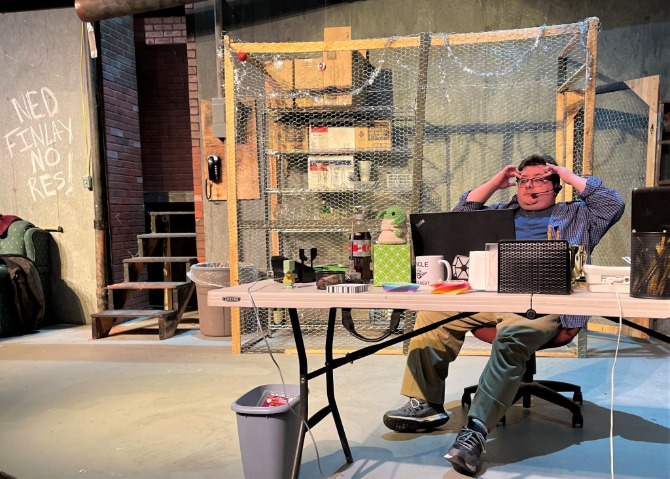 On Sam Slack's bizarrely accurate set, depicting the messy basement office in this ostentatious east-side New York restaurant Palmer's Sam takes his place among the rubble, the discarded evidence of humanity.  He answers his phone calls from demanding, or angry, or demeaning  customers, each of whom displays his or her own sense of personal entitlement. What they demand from Sam - whom most have never met or even seen - is loyalty to their personal agendas. Not even his agent's office help regard him with much regard at least not until he receives the acting opportunity he has believed will some day be his. It is amazing to witness the change come over him, and Palmer plays this subtly and beautifully. He may not be able to produce all of the many voices another actor could in presenting all of the people Sam interacts with, but he makes up for that technical lack with sincerity and honesty, two acting traits that take him a long way into his own career. Differentiating the various callers is not the only way to make this play work for eventually they all - with a few exceptions - really do blend into one massive antagonist.

Author Becky Mode has clearly been there and done that in her life, for her depiction of a difficult day for the reservations clerk smacks of reality. So much happens so quickly that Sam's day zips by and from breakfast to quitting time it is shown in a 90 minute rush. The play is exhausting for the actor and for the audience as well as we try to keep up with everything Sam encounters in his typical day of work. Actors in New York really do suffer these sorts of jobs to make ends meet. Mode gets it all just right in this script and, luckily for us, she makes it fun by giving every word said on both sides of the communication devices to the single actor playing Sam. I've seen three productions of this play and I can't help wondering now what it would be like if Sam was played by a woman. Would the situation still be funny or would it present as tragic? However, this time around it is played by a man, it is funny, and is kept that way by director Sky Vogel.

Kara Demler's straightforward costume is perfect for Sam. Joseph Sicotte gives us wonderful atmospheric sound and adequate lighting. Vogel moves his actor around a great deal so there is nothing static about the play and he has helped Ryan Palmer create the world and environment in which Sam brings his day alive for us.  This is one of those almost perfect presentations that help to keep the Theater Barn a place people like to be.  You could steal a concept from the play's title and declare this company to be fully committed to their mission to present a vital theatrical experience, for that is indeed what we have right now at the Barn. Everyone reading this needs to get together a theater party and have a good time on the outskirts of New Lebanon, NY.

Fully Committed  continues at the Theater Barn, 654 Route 20, New Lebanon, NY, through July 4. For more information and tickets contact the theater at 518-794-8989 or go on line at www.thetheaterbarn.org.