"What about me? What do I get in return?"

Four people with agendas abounding inhabit this comedy by Lucas Hnath, best known for his play "A Doll's House, Part Two," which has been on Broadway and local stages and will be seen once again this summer in Bennington, VT.  Set in a nursing home, "Death Tax" concerns Maxine, a woman who intends to cut her ungrateful daughter out of her will in an ingenious, not to say devious, manner. Convinced that her day-nurse has been hired to kill her before the new year begins in order to avoid her daughter paying higher death taxes on her luscious inheritance in the new year, Maxine connives to give the money instead, on January 1, to Nurse Tina who is in dire need of cash to set her own life on the right path to contentment. In this play this is just the start to more and more manipulations and machinations among a group of characters who may seem reasonable and even nice at times but who all explore the possibilities of control and the completion of tasks that could bring happiness. Tina is secretly loved by her boss, Todd and reviled by the unnamed daughter of Maxine. Played by Monet Thompson, Tina is never off the stage as she bounds and rebounds while each other character uses her for his or her own purposes. It is a five scene marathon for the actress who plays her in the first four scenes only to return as a social worker named Candace in scene 5.

How complicated can you get!

Lisa Bryk plays the Daughter. The character is abrupt, mean-spirited, cocky, belligerent and ultimately quite vulnerable and Bryk captures every emotional shift in her character.  She creates a physical sense of this self-abused woman whose mother despises her and degrades her when she refuses to see her when she visits.  Bryk seems to have no guile even as her character suspects Nurse Tina's role in her mother's life. Director Patrick White has helped confirm these images of the young woman by matching her attitude to that of her mother; the two characters are inextricable, images of one another.

Maxine, on Tuesday night, was played by Sara Paupini  -replacing an ailing Debra Bercier. Though she worked with script in hand, it went basically unnoticed by the audience as the very talented woman pulled off every nuanced word and gesture with true aplomb. ﻿ 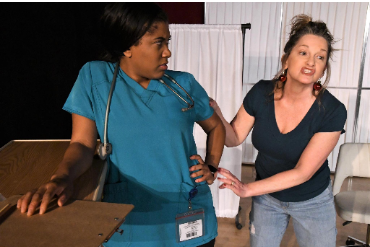 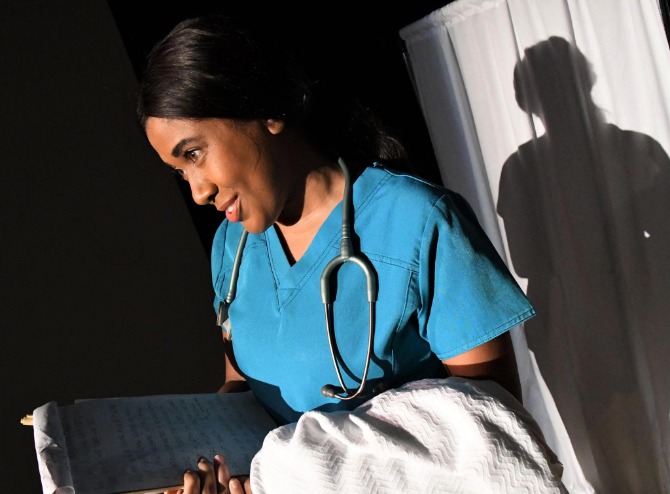 Though it seems, at times, to revolve completely around Maxine, it is really Nurse Tina who dominates the play and Monet Thompson strike just the right chord in the role. She is a tri-apartheid actress, her voice, face and physicality always right for each moment. She brings a sweet tenderness to the part while at the same time portraying the deep needs and longing of a deprived mother. Her face can show longing while her words are simple and seemingly steadfast. She manages to make honesty into a plural attribute: simply spoken but hiding hidden truths. Ultimately Tina becomes someone who cannot be trusted to reveal anything true about herself. Thompson is the perfect actress as Tina, concealing motives, even from herself at times.  When she tells a lie it is spoken from the heart and when she is speaking from the heart we begin to wonder exactly what she really says and what part of it is real.  When Maxine says her final "People who have money are preserved" in scene five, there is an echo of Tina's response to that phrase in the first scene. I personally hate to regard a role as a "tour-de-force" but for Thompson the role of Nurse Tina approaches exactly that.

The Man in the play and the Man of the Play

Dmitriy Kogan plays two roles. First he is Tina's boss and erstwhile boyfriend, Todd. Later in the play he returns as Maxine's grown-up grandson Charlie. Charlie is a wonderful extension of the character of Maxine played with the underbelly of his mother, her "Daughter." Kogan gives him, both physically and emotionally, aspects of both women. But it is Todd where he truly shines.

He performs the sensitivity of a man betrayed  in love and trust wonderfully. He is the ultimate victim of women who seems almost not care about being treated badly as long as he is treated at all. Tina manipulates him in a dozen ways and even though he knows she is doing it, he allows it to happen anyway. Kogan could make a career out of this sort of character, he does it so very well.

So much of this successful show is the product of Patrick White and his almost magical way with a company of very good players. He has displayed this magic touch before but here he is so good at it that it seems a shame to prematurely close this show. It's second and final week of performances is being cancelled unless a miracle occurs and I hope for a miracle. 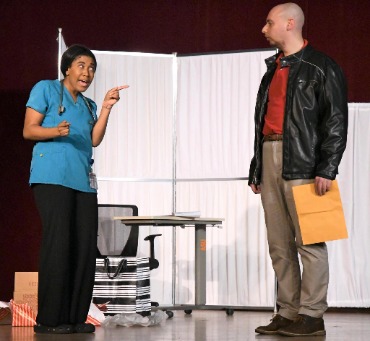 Death Tax, scheduled to play Monday through Wednesday until June 16 may close on June 9.  It plays at the Albany Barn Theater at 56 Second Street in Albany, New York. For information and tickets call 518-779-2803 or go to: https://www.eventbrite.com/e/death-tax-by-lucas-hnath-tickets-149895813413