"Waitress" is a simple story about a simple girl, simply pregnant and not happy about it, less simply involved in the lives of three men. Simple as she is, she has one straightforward talent: she bakes incredible pies for the diner where she works. And she is very simply in a lot of trouble she never counted on. Her two close friends, also waitresses, are no help to her at all. Simply not at all.

Are you getting the picture here? This is a simple show, possible to follow even when you cannot distinguish a word of the lyrics, which was the case at Proctors where the show is playing this week. The rock band that accompanies the company consists of excellent musicians who are not well balanced with the singers and that results in a simple problem: audibility. . . even when it's clear that Christine Dwyer as Jenna, Ephie Aardama as Dawn, Melody A. Betts as Becky, Steven Good as Dr. Pomatter and Jeremy Woodard as Earl are all superb singers. 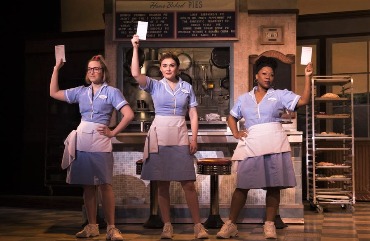 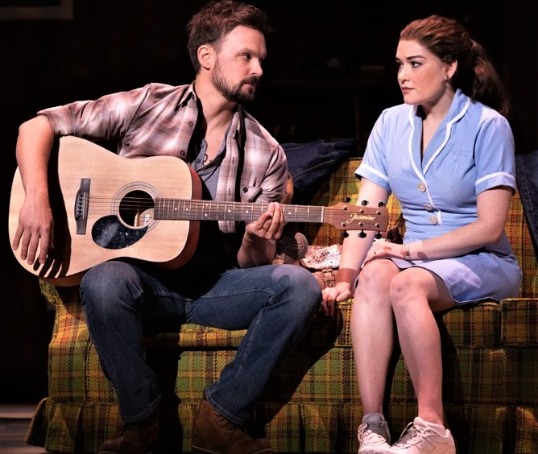 The truth is that this show is pretty good but hampered by sound issues. The songs by Sara Bareilles are not very memorable and the book, based on the film written by Adrienne Shelly, is almost too predictable. What keeps it interesting and working for the audience is the strong personalities on stage. The characters hold our interest because the cast is wonderful and we want them to succeed more than we want the characters to find their happy endings. This is a strange state through which we sit for just over two and a half hours (nine months and three years in stage time).

Jenna lives with her self-centered, egotistical husband. While she is no longer in love with him she finds herself unable to separate from him. He controls her, takes her tips from her, subjugates her constantly, and yet she cannot fight the man who is her abuser. The situation between them is classic and dramatic. Something about bullyism always is.

Woodard never achieves a romantic idealism, but his violence is perfect for the role. He is a physical actor whose face and voice belie the character's need for domination and Woodard plays the role with strength and even a bit of charm. He provides some blood-chilling moments. 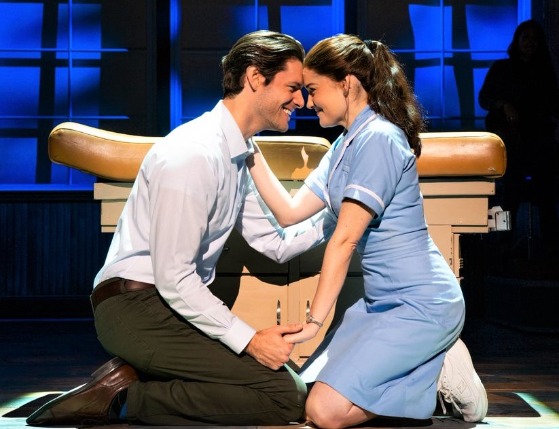 The second man in her life, Jenna's new Gynecologist, is maladroitly attractive and he is immediately attracted to her. Like Jenna he is married. They both acknowledge the difficulty and awkwardness in becoming involved, yet they cannot help themselves. They are attracted and they struggle with this fact for most of the musical. Sometimes it is touching, sometimes just funny, sometimes oddly sensual to boot.

It is the contrast between the men, each of whom makes her uncomfortable in some ways, that drives the drama in the show. Good is marvelous as the Doctor whose examining room makes an awkward if ample seduction salon. He is tall, handsome and musical, his voice lush and romantic. In every way he is the right man for the waitress, but in as many ways he and she are not the ideal couple. Good's wonderful physical comedy makes him ideal for the role of her unfortunate swain.

It is the differences between these two men that gives the show some much needed drama. Jenna, who comes from a family that provided love and skills that she needed to survive, is a woman torn between these two men, one the father of her unborn child and the other a deliverer in more ways than one. Christine Dwyer plays the struggle perfectly and makes the coming battle into most of the reason to sit through this show.

Joe, the older man in Jenna's life is the third man. He is cynical but caring. He is, as we eventually learn, the original owner of this diner that concentrates on - and adore's Jenna's - pies. He has strict rules on how his food must be shared and is known to place an order and then cancel everything but the dessert. He is willing to back Jenna's efforts to create a way to salvage her discordant life. He is played by Richard Kline who is wonderful and was the only person whose lyrics I could understand completely. Bravo!

The two other waitresses were wonderful and their trio singing divine, wordless but beautiful. Melody A. Betts was a lovely Becky and Ephie Aardama was a delicious Dawn. Aardama plays well with others, particularly with Jeremy Morse, whose place in this show is assured through his fabulous comedic turns as amateur magician, a man of many ailments and the ardent suitor of Dawn. Even through his practically perfect comic turns he makes Ogie endearing and attractive. A wonderful performance, once again. 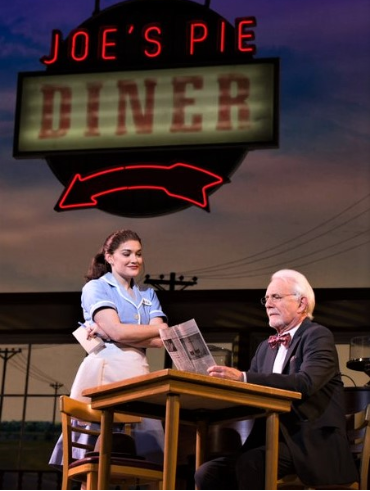 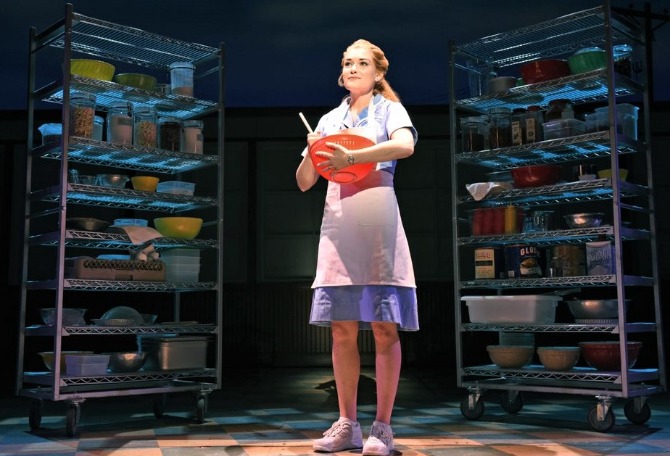 ﻿Cal, the cook in the diner, was played expertly by Ryan G. Dunkin (typecasting?). Nurse Norma was given the best of the talents of Rhaume Crenshaw and Alex Tripp delivered nicely as Francine, the doctor's wife.

Physically this is a stunning production directed extremely well by Diane Paulus. The sets by Scott Pask kept the stage looking good and the costumes by Suttirat Anne Lalarb did the same thing for the actors. Ken Billington's lighting design kept the show up to Broadway standards. Under Paulus' hand the show moved beautifully and held our attention.

This will never be a show I rush to see, but it is a fine example of how excellent craftsmen can create an enjoyable evening out of violent behavior, neediness and a magnanimity of spirit all working together in a theatrical milieu. It's a good thing that more people can see it on its tour. And finally, a big round of applause for Amsterdam, NY's own Vivienna DiMezza as Lulu, the person the show is truly, and simply, all about.