The Importance of Being Earnest by Oscar Wilde

﻿"Yes, I remember that the General was called Ernest. I knew I had some reason for disliking that name."

Only once in Oscar Wilde's script for the play "The Importance of Being Earnest" is the much-spoken name, Ernest, spelled in that peculiar way, with the "a" in the second place. Pronounced identically to the name the word has quite a different meaning:  Intensely serious, with serious and sincere intention; opposite of a joke.  In his brightest most eternal comedy Wilde played this verbal joke on his audience. He used a man's name to turn the tables on his characters and also his fans and detractors. When he lets Jack use the word rather than the name he was telling Gwendolen, Lady Bracknell and al of us know that it is a man's responsibility to be truthful, upfront and honest about his mindset and his feelings. For Wilde it was as close to a confession as he could get about his own life and his love for another man. "I've now realized for the first time in my life," Jack says in the closing speech of the play, "the importance of being earnest." Written in 1894 it would be less  than a year before the author would be in a public struggle over his right to love as he chose with the Marquess of Queensbury about the nobleman's son, "Bosie."

This is just one way to understand this play, now on the Unicorn Stage in Stockbridge, MA in Berkshire Theatre Group's summer production. It is a play about couples and just as in Wilde's life the makeup of those couples constantly alters. The two younger women, for example, play much of the second and third acts together, their constant mood changes one of the greatest pieces of comic writing. They charm each other, then resent each other, then defend each other and loathe each other. Finally, when each one gets the man she wants they are dear friends again. And they've only just met! Rebecca Brooksher plays the Honorable Gwendolen Fairfax, who want to marry Jack Worthing, with all the right attitudes for the role. She brings maturity to the friendship and a lovely voice with which to express it. Claire Sunders, playing Miss Cecily Cardew, newly loved by Algernon Moncrieff, uses the shrillness of a teenager to express herself. Sometimes that voical timbre is a bit too much to bear and we wonder why she actually attracts the immature Algy - or maybe that's a part of the attraction, her apparent youth. 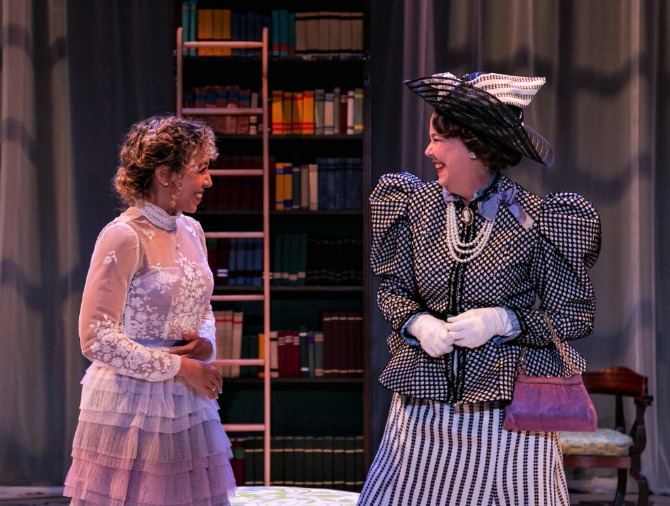 The relationships between Lady Bracknell (Gwendolen's mother) and everyone else are Wilde's version of the Marquess's relationships to him and his son and to the rest of the word. She is the great pronouncer of decisions. Her word is law and her laws are exclusively her own. In this production she is played by Harriet Harris. Her bombast is brilliant and her few soft moment are utterly disarming. In Harris's hands Lady B becomes more honestly human than I have ever seen done with the role before. Strangely enough, even her mode of dress, costumed brilliantly by Hunter Kaczorowski, helps to make her a more human and sympathetic character.  I'm one of those people who loves what Harriet Harris can do for a role, but here she has surpassed herself and is the main element that would compel me to see the show (not my first time, you see). As she has done before, this summer she makes her way through the dominant companies in the region moving on in a month or so to Barrington Stage Company playing Eleanor Roosevelt.﻿

There is an odd couple in the love mix: Governess Miss Prism and Clergyman Reverend Chasuble. She is an elderly virgin and he is a devout abstainer. Played by real life husband and wife, David Adkins and Corinna May, their interplay is quite special for Chasuble and Prism have a friendship that is quite special.

May transforms her character from the stern schoolmistress to the giddy maiden to the trampled servant embarrassed and humiliated without blinking an eye. She goes with the moment and makes it real. She is honest and earnest. So is Adkins who can make the sweetest line of dialogue sexy and the quietest moment into something relentlessly seductive.  Watching these two  play their parts is a lesson in acting in a stage partnership. They support one another without showing it. 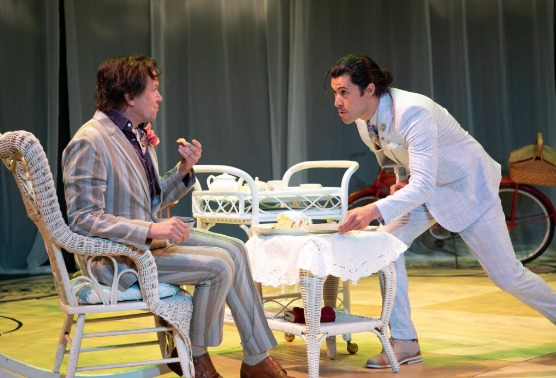 The two men in the romantic duets are Jack, who claims to be Ernest, played by Mitchell Winner and Algy who pretends to be Ernest, played by Shawn Fagan. Both men are fine in their roles, but not the great romantic figures they could be. Instead they are ordinary men dealing with ordinary problems that men need to overcome.  Neither one has a girlfriend who pays as much attention to them as they need. Both actors fight for prominence with neither of them winning the battle. If anything, Winner fights our image of Jack with his dark base-of-the-neck bun that seems almost too contemporary for this late Victorian romp of a play.

That actually is a problem with much of the event, Scott Killian's sound design is too caught up in late 20th century music. Bill Clarke's set design it just a bit too turn of this century sparse though Daniel J. Kotlowitz's lighting design helps to preserve the sense of period the play need. David Auburn's direction is basic and not cohesive in its stylings. He misses opportunities for physical comedy and the relationships don't quite feel finished. But are relationships ever finished? I doubt it.

Nowadays a production of this play may need to be completely rethought and reconceived. Obviously I like it the way Wilde wrote it. Nicely the lines still play as they were intended and nothing can change that. If you like this play you should definitely see it for the things that are really good in it. If you don't really know the work you'll come away with a very good sense of it and an understanding of how things were in the days of Victoria and her son who would shortly replace her on the throne. You might even leave the theater with a case of "Ah-Hah!" about today's young Royals. This is just a good play given a decent revival.

The Importance of Being Earnest continues at the Unicoron Theatre on Route 7 Stockbridge through July 10. For information and tickets call the Berkshire Theatre Group at 413-997-4444 or go on line at www.berkshiretheatregroup.org. ﻿